peek >> << back
Near Southeast DC Past News Items: justins
Advertise on JDLand 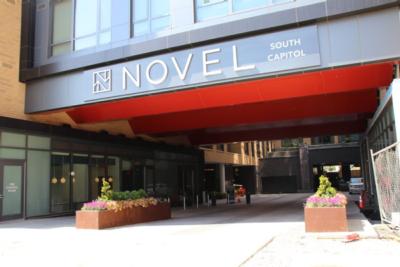 If you haven't been keeping up, the list of new food and beverage offerings coming to the neighborhood over the next year or so is starting to get kind of long, and as more buildings are completed, the list will probably grow. (West Half alone accounts for about 40 percent of the list, which they are now touting with their fence signage.) You can see my map of food options and then scroll down to the bottom to see the full future lineup.
Nov 5, 2018 2:57 PM
Catching Up With a Boatload of Recent Tidbits
I am, shall we say, a bit distracted these days, and so have been taking full advantage of that whole "I'm only going to post when I feel like it" pledge from a few months back. (And I still need to write a longer post on news of Greystar's plans on the CSX land west of New Jersey, but there's only so much blogging blood that can come out of this stone right now.)
Most of these items will sound familiar to the commentariat, but for those who haven't been following the conversation: 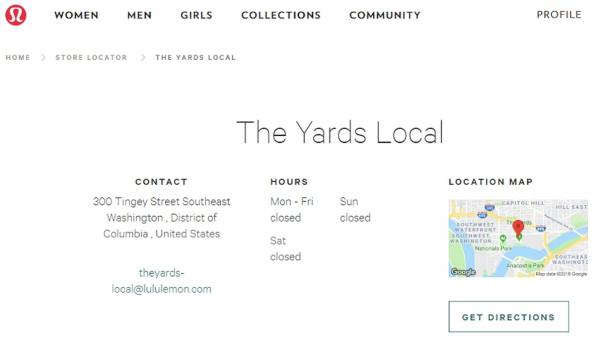 * LULULEMON COMING: Yoga pants and other accoutrements will be coming to the Boilermaker Shops on Tingey Street in the Yards, according to the company's web site. It will move into the space vacated by Steadfast Supply's move to Water Street.
* SOMEWHERE COMING: "Somewhere", an "intergrated retail and cafe concept" from folks on the team that created Maketto on H Street will be coming to F1rst in 2019. The press release says it will combine "a highly curated retail mix of high end clothing, sneakers and other footwear, unique brand products, as well as planning and orchestrating community events. The team will also develop programming for the residents of F1RST, including interactive social media opportunities, style consultations and more."
* RETAIL INDUSTRY COMING, SORT OF: WBJ reports that the Retail Industry Leaders Association has agreed to lease nearly 13,000 square feet at 99 M.
* MODERN NAIL BAR ARRIVES: New signage for "Modern Nail Bar" has appeared above the corner space at the Courtyard Marriott at New Jersey and L. I have not poked my nose in, so I do not know if this is one of those newfangled places where they ply you with alcohol while clipping and coating the tips of your digits. (h/t @202FSUNole)
* HALF STREET WAREHOUSE HALF GOING: Partial demolition is underway on the red brick former GSA warehouse on the southeast corner of Half and L, which was purchased by the Lerner Companies last year. According to the permit, they are taking off the roof and the top part of the walls, down to a height of about four feet. What's the plan? An "open uncovered parking lot," according to the permit.
* JUSTIN'S GONE: After eight years, Justin's Cafe has closed its doors. (h/t reader JES)
Enjoy your fresh thread, commenters!
Feb 24, 2014 5:00 PM
New Restaurant by Justin Ross Coming to 20 M Street 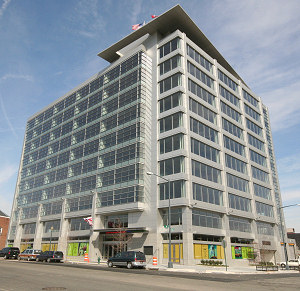 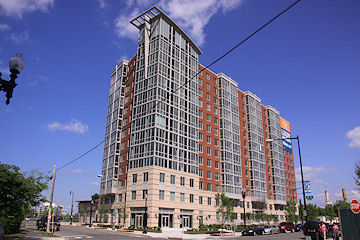 Some potential retail news might have just come onto the radar screen: on the agenda for ANC 6D's next ABC Committee meeting is a proposed Class A license at 909 New Jersey Avenue for an entity called "Harry's SW & SE". They are proposing apparently to sell beer, wine, bread, milk, cheese, and sandwiches (and no "singles"), which is in line with a Class A/liquor store license. If anyone who lives at 909 has heard any rumors, or if anyone else has some scoop, drop me a line. I'm trying to find out more, and will update as I can. (Though the last time I started asking questions about a license application when one appeared on the ABC agenda was a few months ago for 55 M, and it disappeared from the lineup almost as soon as I hit "send." So be forewarned.)
Also on the ABC agenda is a change to Justin's Cafe's license, with Justin now seeking to add a sidewalk cafe.
The meeting is on June 2 at 7 pm at King Greenleaf Recreation Center.
UPDATE: There was a Harry's Liquor Store at 401 M St., SW back in the old Waterside Mall--I don't think it's reopened in the new building(?). I imagine this is the same owner.
UPDATE II: It is indeed the same owner as the old Waterside Mall store, and he also owns Capitol Hill Wine and Spirits in the 300 block of Pennsylvania Ave., SE.
Apr 16, 2010 8:08 AM
Justin's Cafe Opens Today (and SW Safeway, Too)
The word yesterday from the BID is that Justin's Cafe is opening today, and, if so, that means the neighborhood gets its first new restaurant in a long LONG time and what might be considered its first "real" bar. (For a new restaurant, you have to go back to the opening of Five Guys in 2005, if you're not counting the 2007 opening of Starbucks or the arrival of the restaurant and bar at the Courtyard by Marriott in 2007 or the Bullpen.) If you get there for some food or drinks, post your thoughts in the comments.
I'm thinking of maybe next Thursday, April 22, as an unofficial little JDLand Happy Hour? (In other words, I'll go have a drink or two, and see if anyone else comes along. :-) )
Also opening today is the new and improved Safeway at Fourth and M, SW. If you shop there, pass along what you see.
Apr 11, 2010 10:25 AM
Updates from Capitol Riverfront BID Newsletter
It's not online that I can see, but here are some items from the most recent "FRONT Page News" e-mail newsletter from the BID:
* "Capitol Riverfront neighborhood day at Nationals Park will be Wednesday, April 21st with ticket discounts available to residents, employees, and friends of the BID." The on-street supervisor of the BID's Clean and Safe Team will be singing the National Anthem. [I think, though, that Southwest is going to be part of this "neighborhood day" as well, even though it's not in the BID. This was mentioned at an ANC 6D meeting a few weeks ago.]
* There will be a "Fitness in the Front" event at Canal Park on May 1, with free classes offered by local instructors and information tables (and freebies!). See the link for the lineup and additional info.
* Residential update: "The residential population in the Front is estimated to have reached 3,030 as of the first quarter of 2010. Rental properties including the Onyx, Axiom, Jefferson and 909 are 95% leased. For sale units including Capitol Quarter, Capitol Hill Tower and Velocity are 71% sold. The residential population is predicted to reach 3,500 by the end of 2010."
* And Justin's opens on April 16, but you knew that already. :-)
Apr 6, 2010 8:32 PM
Justin's Cafe Gets Liquor License; April 16 Opening
I've just received the news from Justin Ross that he got his liquor license today, and that Justin's Cafe is on target for an April 16 opening. (Yes, I know I was skeptical of that date a while back, but now that I've heard it from the guy who's name is on the sign....)
If you haven't been following along, Justin's will be a restaurant with full bar serving pizzas, sandwiches, and salads, open seven days a week with regular "bar hours," just a few blocks up First Street from Nationals Park. Here's an electronic version of the menu.
We'll have to do a JDLand get-together there in late April.
22 Posts:
Go to Page: 1 | 2 | 3