peek >> << back
Near Southeast DC Past News Items: staddis
Advertise on JDLand 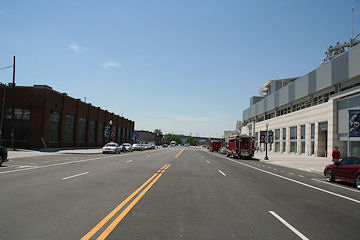 Wednesday's Post has a column by Tom Boswell ("Nationals Park: Best of a Bad Lot") listing the myriad problems he sees with the ballpark and its surroundings, with Opening Day now just a month away. The Navy Yard subway station. The parking situation. The Florida Rock site ("an enormous and inexcusable 5.8-acre eyesore" that will be "sitting there all season, damaging the river views from all the ramps to the first base upper deck"). (He does mention that fences to obscure the view at ground level will be going up, which I posted about a few days ago.) The WASA site (which "would be the Most Unsightly Thing Near Any Big League Park if Florida Rock and Gravel hadn't already retired the trophy.") The Monument Half Street site, where he says "construction has stopped." The fact that city views are only available in the cheap seats.
But he ends with a stab at optimism: "Someday, the Anacostia riverfront will amaze us, just maybe not as soon as we hoped. When it comes to fulfilling huge civic dreams, what's a few years, more or less. In for a dime, in for a decade. "
On the other hand, the article confirms that the garages, which have long been a focal point of much complaining, will indeed be covered, as has long been shown in the renderings, with "league logos, replicas of the 'Washington All-Stars' from the right field scoreboard in RFK as well as colorful baseball-themed ads."
Feb 25, 2008 9:36 AM
Washingtonian Articles, Signs, and More

The Southwest Freeway now says there's a ballpark in our midst, so it must be true! (And of course the Bike Route signs started telling us this last week.)
Other news of the morning:
* The March issue of Washingtonian (not yet available online, but now on newsstands) has two articles of possible interest. One is an overview of the ballpark itself. The other is called "Ballpark Living: Can the Nationals Stadium Do For an Up-and-Coming Waterfront Neighborhood What the Verizon Center did for Downtown DC?", in which yours truly gets a mention. It's mainly an overview of the neighborhood's offerings now and down the road, most of which should be no surprise to anyone visiting here on a regular basis. UPDATE, 2/26: The article on the ballpark is now available online, though the other one isn't there yet.
* Speaking of magazines with special ballpark offerings, I mentioned On Site magazine last week--I'm told it's available this week (bundled with the current issue of the Washington Business Journal) at CVS, Borders, and Barnes & Noble.
* In both of these magazines, there's an updated rendering of the Monument's 340-unit residential building slated to be finished by the end of 2009 on the northeast corner of Half and N, just across from the ballpark's Center Field Gate. Monument was kind enough to pass it along, and I've added it to my Monument Half Street page (scroll down past the 55 M stuff).
And, be sure to catch my new photos from inside the ballpark (both inside and INSIDE) if you haven't seen them.
Feb 22, 2008 9:23 AM
WBJ On Site: In Depth on Near Southeast
I believe it's only available to subscribers, but if you've got any way to get your hands on this week's Washington Business Journal, you'll probably want to see the quarterly magazine "On Site" that's included--seven stories on development around the ballpark, as well as a big map showing all the plans over the next few years (what a great idea!). Stories on Monument Realty and on the plans for The Yards, an interview with Michael Stevens of the BID ("Preaching Patience in Washington Nationals' New Neighborhood"), a piece highlighting how residential developers are feeling bullish about the area, and even a short profile of some pesky neighborhood blogger who's been tracking the area since 2003. I haven't read all the stories yet (it's gonna take a while!), so if I find some nuggets that I haven't covered here in the past, I'll post them.
UPDATE: Also, the March issue of Washingtonian is hitting the stands (though the articles won't be online for a while), with articles on the ballpark and also on the planned residential projects nearby.
Feb 12, 2008 12:19 PM
Metro: Proposals to Expand the N22 Bus Line and Vacate the Southeastern Bus Garage
The agenda is now out for Thursday's meeting of Metro's Finance, Administration and Oversight Committee, with votes on two items of interest to Near Southeast and to ballpark-goers:
* WMATA is proposing to expand the weeknight and weekend service of the N22 bus that currently shuttles between Union Station (and its Red Line Metro stop) and the Navy Yard station at New Jersey and M via Eastern Market (and its Orange/Blue Line stop) and the Washington Navy Yard. The buses would run every 10 minutes, and on nights and weekends the route would eliminate the loop to 12th and M streets, SE (see the map on page 2 of the current timetable), in order "to provide a shorter and faster route to the ballpark." The District of Columbia is apparently going to pay $432,000 to cover the cost of the additional service from March through August. If approved, the expanded service would begin in March. The agenda documentation doesn't say what times the expanded service would end on weeknights or operate on weekends. Read the agenda packet for more.
* The city is also apparently offering to cover the costs of relocating the buses out of the Southeastern Bus Garage at Half and M (one block north of the ballpark), as part of a $1.39 million monetary shuffling that WMATA is proposing to undertake because the $69.25 million sale of the site to Akridge still has not been finalized. DC would cover the relocation costs until the sale is completed, and presumably by doing this the buses can get out of the garage by March 30. Read the agenda packet for more details. The city is extremely interested in getting the buses out of the way, not only because trying to operate that garage with hordes of pedestrians on their way to and from games would be a disaster waiting to happen, but also because the Nats might be able to squeeze a couple hundred more $35 Red Zone parking spaces out of the garage land and the two lots adjoining it across Van Street (one to the north and one to the south of the Public Storage building).
These are just preliminary votes; if approved on the 14th, they would then go in front of the full WMATA board for final approval on March 28.
Feb 11, 2008 9:51 PM
Whole Lotta Photos From First and Half Streets

While hopefully you've already wandered through the pile of new stadium exterior photos I posted over the weekend, those aren't the only new pictures I grabbed during my camera time on Saturday and Sunday. Get your clicking finger going:
* The Velocity condo phase 1 building on L Street west of First is now one floor out of the ground, so that will now be added to my regular rotation of photo updates. For those who haven't been following along, this is a 200-unit condo building that will eventually be joined by a twin on the north side of the block (running along K Street). However, they decided to dig the entire parking garage and below-ground structures for both buildings at once, which is why only half the block is now rising above ground level. The other portion will be landscaped over until Phase 2 begins. (Phase 3, which will run along Half Street where the sales center is now located, could be either an office building or a hotel--I haven't heard of any decision being announced.)
* The Normandie-less corner at First and M has now been immortalized in digital imagery, and goodness gracious, has that spot changed. (Ditto for the other end of the block, at First and N.) This stretch is on its way to becoming temporary surface parking until Willco Construction moves forward with its reported office/residential/retail project on that site (no timeline).
* The road work on First Street continues, and on Saturday they put down the first asphalt between L and M (in front of Onyx and 100 M). Looking south and north you can see how much wider the street has now become. You can also see the windows starting to be hung at Onyx and at 100 M. Meanwhile, First north of L continues to be a war zone. They *say* it'll all be done (I Street, too) by Opening Day. First Street and Potomac Avenue appear to be pretty much done except for the striping.
* 55 M is almost topped out. As we heard a few days ago, they say the Metro entrance in 55 M's ground floor will be ready by Opening Day, too.
* How much has M Street changed in five years? Take a look. (This should be one of those list-the-differences-in-the-pictures contests.)
* Or you can just look at all the photos from Saturday and Sunday on one page (including the ballpark shots), though I cannot be held responsible for any sensory overload you may experience. Imagine how I feel, especially considering that what I've posted is probably only about a third of the photos I actually took....
195 Posts:
Go to Page: 1 | 2 | 3 | 4 | 5 | 6 | 7 | 8 | 9 | 10 ... 20
Search JDLand Blog Posts by Date or Category