peek >> << back
Near Southeast DC Past News Items: Water Taxis/Riverboats
Advertise on JDLand 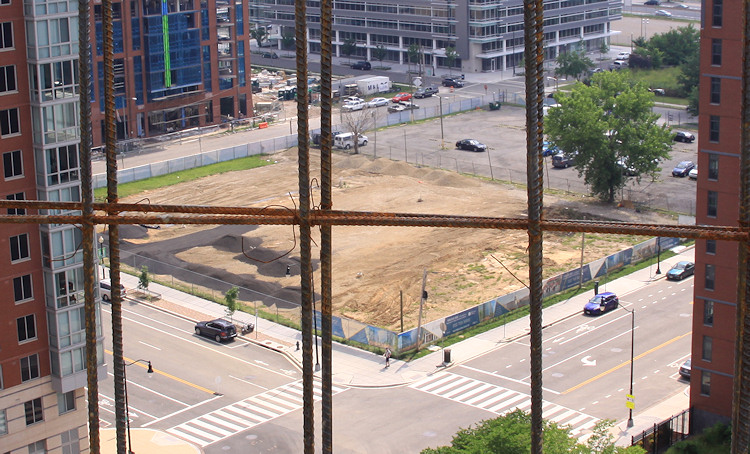 I've got a few more itty bitty items, so let's have another tidbit go-round:
* LOT LAYING: Enough people have written (and progress has been so slow) that I finally have to post that the work many of you are seeing on the Congressional Square block at 1st and I isn't the beginning of development there--the word is that the parking lot on the west side of the block is being extended eastward.
* PILE DRIVING: Pile driving has started at 800 New Jersey/Whole Foods, if your ears haven't already alerted you.
* TRAILER PLACING: A building permit just came through the pipeline for a temporary sales trailer at 1000 1st St. SE. The land. owned by Akridge, is unlikely to be about to see any large-scale construction, so might this instead be the beginnings of a leasing center for Toll's River Parc across the street?
* FERRY DOCKING: Following up on the ferry news from last week, I finally heard back from the office of Frank Principi in Woodbridge--it sounds like the routes and docking locations are still not 100 percent decided on. There is a stakeholder's group that will ultimately make the decisions, and it is meeting later this month to work on the project. So reports of a "Navy Yard" destination or a St. Elizabeth's destination or a Bolling destination appear to be premature.
Jun 6, 2014 2:48 PM
Fast Ferry Service From Alexandria to (Somewhere) Gets DOT Grant 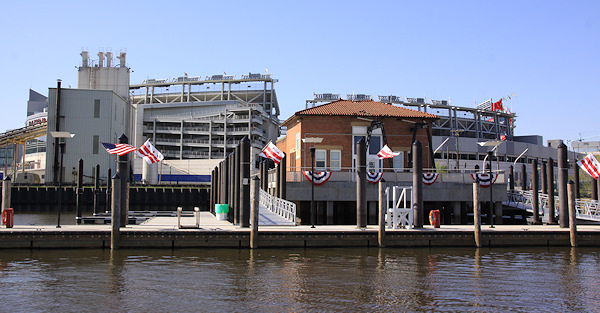 It was announced earlier this week that the US Department of Transportation has awarded a $3.38 million grant to help establish a "fast ferry" service from Alexandria to "the Navy Yard.".
(I've been a bit slow in posting on this because I've been trying to find out whether it's really to "the Navy Yard" (or "the Naval Yard") or to Diamond Teague Park and Piers, which would seem to be the logical location and which was the spot used in the 2009 study of possible service. Haven't come across a firm answer on that in any coverage, but maybe someone else has....)
According to WTOP, the money will be used to buy two ferry boats and operate them during business hours.
WTOP's piece also says that "[g]etting the ferry service off the ground is not a huge technologically complex issue that some would think. But growing it and sustaining it will be more difficult." Prince William County Supervisor Frank Principi, longtime advocate for water-based commuting opportunities, says that it will require partnerships, such as local governments, the military, and the private sector, to sustain the service.
Principi says that the service could be up and running within a year--but there isn't as yet a dock location identified in Alexandria.
UPDATE: As mentioned in the comments, the Post reports today that the destination will be Bolling and St. Elizabeth's (and that's what the actual FTA release says). Maybe earlier reporting was assuming people could swim to the Navy Yard from there.
Apr 5, 2012 11:18 AM
Thursday Tidbits: Roundup of Pre-Opening Day Roundups
Before everyone disappears down the Nats Opening Day/Masters/Caps rabbit holes (myself included!), here's some links to items that might be of interest.
First, a few new entries in the What's New Around the Ballpark? lineup:
* On Tap Magazine surveys the neighborhood with "The Hidden Gem That is the Capitol Riverfront." (Another jewelry metaphor to go with the Post's "Diamond in the Rough" piece from Sunday.)
* WJLA wandered around looking at the ballpark environs.
* The Post's Going Out Gurus blog checked out the Fairgrounds' sneak peek on Tuesday. (Though what's the deal with the photos that look like they were taken through a veil? Will this Instagram obsession never ebb?)
* WTOP runs down the options for arriving at the ballpark by water taxi. (American River Taxi, by the way, says that they are almost sold out for the April 12 home opener.)
Some other items:
* Two reports from MLB.com on the Wounded Warrior Amputee charity softball classic, played Tuesday after the Nats-Red Sox exhibition. The Warriors pounded their celebrity challengers 17-4.
* "DC Modern Luxury" magazine's Men's issue picks the Foundry Lofts as one of the city's "Best Bachelor Buildings." Go here, then click on the Best Bachelor Buildings subhed to get to page 62, then look at the bottom of the page. (As an aside, the write-up sounds even better if you imagine it being spoken by Stefon.)
* Or, if you like your tidbits a bit less glossy, Multihousing News has "Foundry Lofts Blazes Trail on DC Riverfront."
* Bluejacket gets a big write-up and cover photo in Beer Advocate magazine, though we don't get to read it online. You'll just have to make do with the Sept. 2011 batch of photos from inside the Boilermaker Shops the brewery has put up on their Facebook page.
* Nineteen "experts" have picked the Nationals to make the playoffs this year. No pressure!
* The 11th Street Recreation Bridge meeting happened while I was out of town, but here's Greater Greater Washington's write-up of it. But, before the meeting, WCP's Alex Baca posted four thoughts about the concept, with some items of concern worth noting (though "it is a cool idea!" is the first bullet point).
Mar 6, 2012 10:18 AM
Tuesday Tidbits, Getting Closer to Opening Day Edition
Cleaning off the digital desk:

* Readers are reporting that the fence is coming down around the Bullpen on Half Street. This would be in preparation for the new Fairgrounds offering. Designs show that the new "fence" will be shipping containers, which makes sense given that the venture is centered around a shipping container market. Their intent is to have it up and running by Opening Day. (Read my Fairgrounds post from a few weeks ago for much more detail.)
* Speaking of Opening Day, single-game tickets go on sale Thursday at 10 am.
* Residents won't exactly be interested in this news (except maybe from a parking/traffic angle), but I'll still pass along that a new venture called Ballpark Bus is getting launched this season to bring fans from five northern Virginia locations to the stadium. (More to be announced soon, the web site says.) The blog Let Teddy Win has more about the service.
* If you'd rather get to the stadium by sea, Potomac Riverboat Company is once again running its Baseball Boat for the 2012 season--boats leave Alexandria and take about a half-hour to get to Diamond Teague Park, right across from Nationals Park. Price is $24 for a round-trip voyage or $15 one way. (You can also set sail from National Harbor by taking PRC's service from there to Alexandria and then hook up with the baseball boat, for $30 round trip or $20 one way.)
* Also getting ready for another season of operations is American River Taxi, whose owner tweeted on Monday "See you for Cherry Blossoms." The boat stops at Georgetown, the Southwest Waterfront, and Teague Park--and now that pier is a lovely riverside-bridge-walk away from the Yards Park (rather than having to walk up 1st to Tingey, over to 3rd, and down).
* Still haven't heard of an official opening date for Potbelly (though it's expected to be next week), but a press release says that the hours will be 10 am - 7 pm seven days a week, along with delivery service Monday through Friday from 10 am to 2 pm. The store's general manager will be James Carpenter, who previously worked at their Union Station shop. Trivia fans will also note that this location at 301 Tingey (in the ground floor of the Foundry Lofts) will be the 45th Potbelly to open in the DC area.
Apr 18, 2011 11:37 AM
Roundup: Boilermaker Shops, WMATA Land Sale, Ward 6 At-Large Candidate Forum, Water Taxi News
Catching up after a quick trip to Florida: