peek >> << back
Near Southeast DC Past News Items: floatingbridge
Advertise on JDLand


3 Blog Posts Since 2003
Apr 25, 2011 9:18 AM
Spring Has Sprung Photos: 200 I, Capitol Quarter, Yards Park
With the sun finally coming out, it shouldn't be surprising that I took camera in hand on both Saturday evening and Easter Sunday and did some wandering to catch up with the progress at two locations, and to get shots of a few new items I hadn't yet documented. 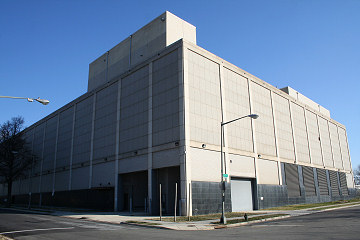 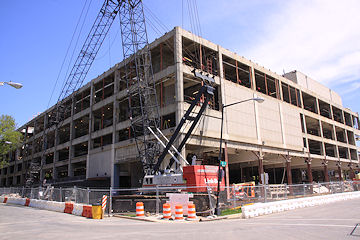 The old 225 Virginia, on its way to becoming 200 I (boo), is now almost completely disrobed. (I think I'll go with that from now on rather than "deskinned.") It's been such a monolith for so many years that it's strange to see it broken up. You can take a virtual walk around the block to see how the old Star/Post plant looked before along with its current state, and visit my 225 Virginia project page for more info and background. (If you haven't been following along, by this time next year 200 I is expected to be nearly complete, with three DC city agencies on the boards to move there.) 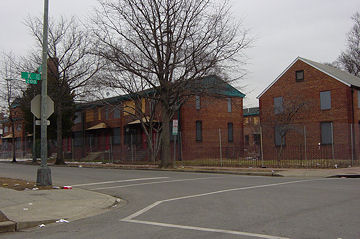 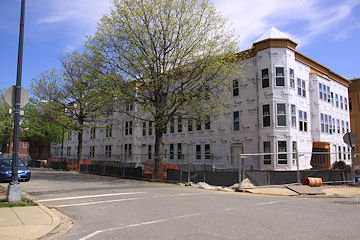 Just to the southwest, work continues on the first block(s) in the second phase of the Capitol Quarter mixed-income townhouse development, with bricking proceeding on the new houses along I Street while framing has made it around and up the new 3rd Place; plus, foundations have now been poured along 4th Street. Here's your walk around the block to be reminded of the old public housing units that stood there for a long time and to compare them with the construction going on now. For more information, see my Capper and Capitol Quarter project pages.
(If you want to see just the new photos taken Sunday, here they are in one batch.) 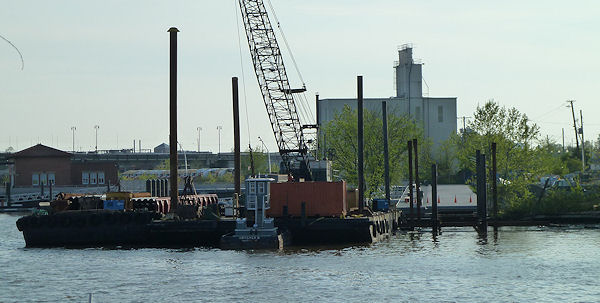 Meanwhile, down at the Yards Park, the flowers are in bloom, a geodesic dome that looks like the Earth is hosting foodies, and work appears to have begun on the floating bridge that will connect the Yards Park to Diamond Teague Park (right by Nationals Park) later this year. You can see my quick gallery of photos showing these items, along with a picture of the sign laying out the rules for using the Navy Yard portion of the riverwalk (since it was Saturday, I could only stand forlornly at the gate and look eastward), plus the progress on the Foundry Lofts building just to the north of the park. And some shots of the Navy Yard buildings that are adjacent to the park, just because I like being in a spot where I can take photos of them without having guards chase me down the street.
Jan 4, 2011 11:07 AM
Tidbits: Floating Bridge, 11th Street Bridge Closures, Water Taxis, Beer Garden
A few small items that might be of interest:

* The National Capital Planning Commission at its Thursday meeting should be approving the design of the 611-foot-long floating bridge to connect the Yards Park with Diamond Teague Park. The "delegated action" document says that the bridge will also include an 81-foot-long platform that will be used as a "marine environmental education center" -- the platform is necessary to span three underground pipes at the DC Water pumping station. At the BID annual meeting in December, it was said that construction on the bridge could begin this spring. (UPDATE) And construction is expected to take 6-8 months.
* If you drive into downtown DC across the 11th Street Bridges late at night/early in the morning, be advised that the ramps from northbound I-295 and 13th Street, SE, will be closed between midnight and 5 am on both Friday, Jan. 7 and Monday, Jan. 10 to allow for work with overhead steel girders. But the South Capitol Street Bridge will be open for your Anacostia crossing pleasure.
* There hasn't been much apparent movement by American Water Taxi to get started with its planned service between Georgetown, the Southwest Waterfront, and Teague Park, but an update on their web site within the past few weeks says that "Focus groups and working group meetings to start in January."
* The agenda for the Jan. 11 ANC 6B meeting includes an item on the "Resolution of the Bavarian Beer Garden [Liquor] License Protest." Does this mean that the ANC and the folks wanting to open the beer garden at 8th and L have gotten the voluntary agreement hashed out, after all the concerns recently expressed? We shall see.
Dec 14, 2010 2:27 PM
2010 Capitol Riverfront Annual Report; Connector Between Teague and Yards Coming in 2011?
The Capitol Riverfront BID just wrapped up its 2010 Annual Meeting, which certainly seemed to be the largest of them so far. The big part of the meeting is the unveiling of the Annual Report, chock full of statistics and photos. I'm not going to summarize it, mainly because I've been writing all year about most of the news and data contained in it, and also because if you're truly interested in the neighborhood you should read it yourself. :-)
There were two items in Michael Stevens' remarks that I thought were of note, though:
* Apparently an agreement has been worked out with DC Water (aka WASA) that will allow the "connection" between Diamond Teague Park (across from Nationals Park) and the Yards Park to be built, starting this spring. In the past, a floating bridge has been discussed as how this connection would be completed, but have asked the BID for more info and will post when I know more.
* In discussing the many parks of the neighborhood, Michael Stevens said that they are "hoping" that Canal Park will be completed in 2011--though, as he said that, the slide being displayed showed 2012 as the expected completion date. Given that the park is supposed to take 12-14 months to build, it would seem to be unlikely that the entire park would be ready before the end of next year, though perhaps some portions of it might be able to be open sooner.
UPDATE: Here's the slides used by Michael Stevens during his remarks; the information on the connection between Teague and the Yards is on pages 22-24, with a rendering showing a walkway out over the water, looking exactly like an extension of the boardwalk at the Yards. The proposed project is listed as "a partnership among Forest City Washington, DC Water and the Office of the Deputy Mayor for Planning and Economic Development." And, on slide 27, Canal Park is listed with a delivery date of 2012.
(PS: I also enjoyed seeing one of my Yards Park photos on the second of the slides shown by DC Water's George Hawkins; maybe next time they'll ask me if they can use it!)