peek >> << back
Near Southeast DC Past News Items: development
Advertise on JDLand 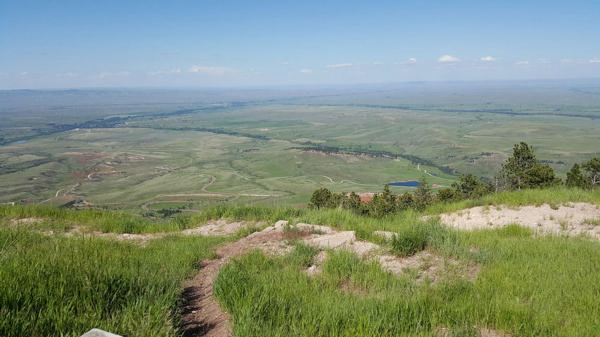 I'm now back from a much-needed respite in north-central and northeast Wyoming, where the buffalo roam, where the deer and the antelope play (sometimes in your yard), and where the skies are (mostly) not cloudy all day.
While I'm miffed that all work in Near Southeast did not grind to a halt while I was gone, I will still pass along these quick tidbits of news, for those who weren't doing their own newsgathering over the past 10 days.
* CRANES A'PLENTY: The residential projects at 801 New Jersey and 1111 New Jersey have now joined the lineup of sites where tower cranes are in place. This of course means that vertical construction at these locations won't be too far off, should everything go according to plan. And there's probably a crane coming before long at 909 Half as well. (Speaking of cranes, they are often lightning rods--literally, as the Dock 79 crane found out last week.)
* ROADS A'CLOSING: On Wednesday, June 24, Virginia Avenue between 2nd and 3rd Streets SE was closed and fenced, as part of initial Virginia Avenue Tunnel work. And a missive from CSX a few days ago says that the expectation is that Virginia will close between 4th and 5th "on or about" Wednesday, July 1. (But the cross streets will remain open.) Drivers will need to use K Street over to 5th to then continue north under the freeway, or to continue east on Virginia Avenue until that portion of road is closed as well. 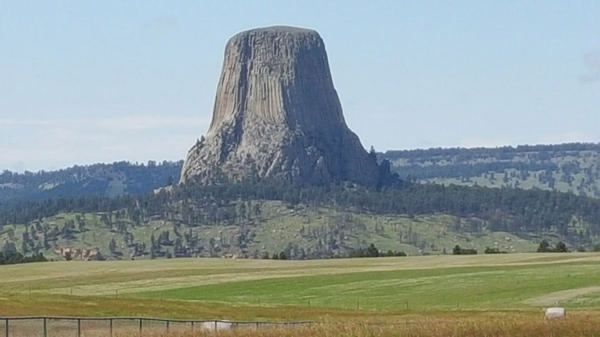 * PIZZA PIZZA: There's still the pesky detail of actual construction, but at last a building permit has been approved for Nicoletta, the pizza/pasta carryout kiosk long planned by Osteria Morini's Chef Michael White in one of the small retail bays beneath the Yards Park overlook, on the Riverwalk.
* BARDO DELAYED: The plans for an outdoor park and "brew garden" on the west end of the Florida Rock site are "now looking like a fall opening," according to WBJ--"if we're lucky." "Red tape" is the reason given. WBJ also notes that the Indiegogo crowdfunding campaign that was looking for $200,000 to help fund the venture closed with $4,330 in contributions.
There's probably more to come, but that's good enough for now.
Apr 28, 2015 7:39 PM
A Real Name for Florida Rock's First Building: Dock 79 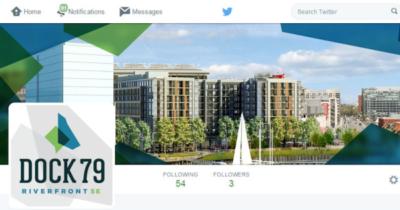 I imagine there's some sort of more official rollout to come, but I'll just jump the gun as I see evidence this evening that "Riverfront" isn't going to be the name for the apartment building currently under construction at the old Florida Rock site.
Instead, say hello to "Dock 79," now on Twitter at @Dock79DC.
It looks like there will be an official web site in the near future, but I don't think they are ready for company just yet.
Way (way!) back when, the project was christened "Riverfront on the Anacostia," so I admit to never quite being sure that the "Riverfront groundbreaking" was referring to the project or the building, but no one ever corrected any of posts here or in lots of other outlets using that name for this building.
But now we know.
And I now I must roam through my site to add the new name everywhere.
Feb 2, 2015 9:46 AM
Progress Photos: Looking Up into the Deep Blue Sky 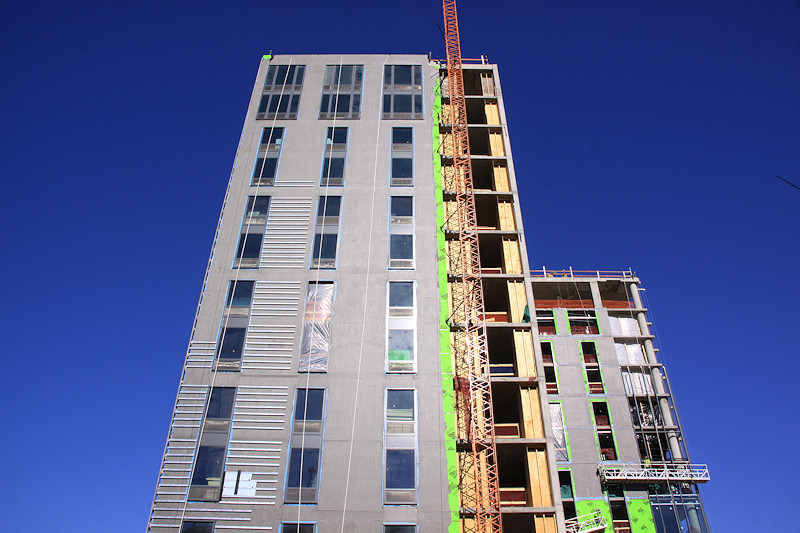 Thankfully my camera shutter does not seize up in cold weather, because I spent more than two hours on Saturday wandering the neighborhood* to catch up on all of the latest doings, of which there are so many these days.
I looked at The Brig.
I looked at Subway and the Big Stick.
I looked at a few other spots that you'll hear about soon.
Unsurprisingly, I also looked up.
And what a sky to look up at.
(Just ignore all those dust artifacts marring the magnificent blue. Time to buy my own sensor cleaning kit.)
I looked up at the Hampton Inn at 1st and N, which now has most of its windows and appears to be about to get its facing. Maybe it looks a smidge less like a grain elevator now.
Then I looked up at the VIDA Fitness complex at Twelve12, originally to document the new Bang Salon and Penthouse Pool Club signs, but how I could resist yet another shot of the VIDA sign when I saw this? 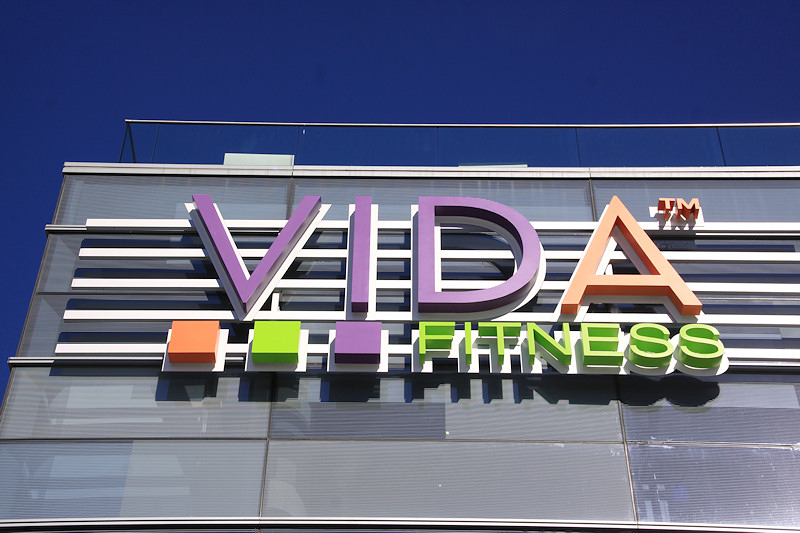 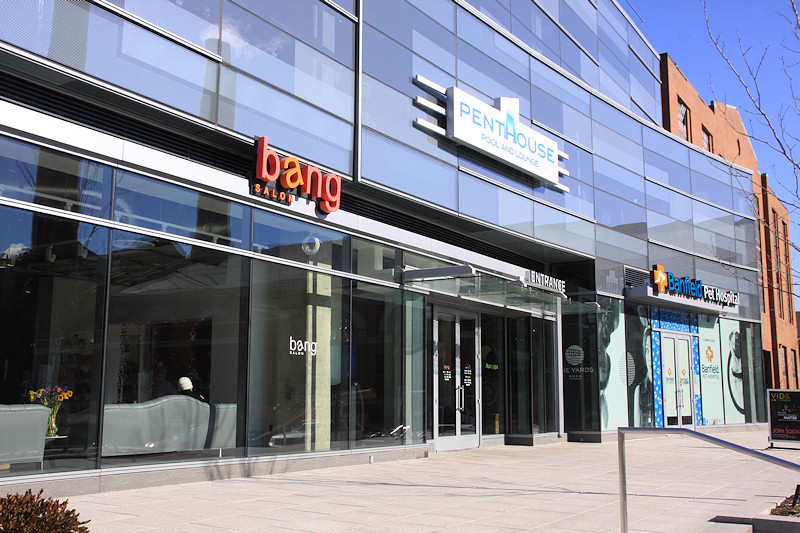 I've mentioned the Banfield Pet Hospital sign before, but seeing it there reminds me that a reader passed along a Banfield tweet from early January saying that Banfield would be opening Feb. 7. Keep an eye peeled for the removal of the window coverings....
And finally, we have the Park Chelsea, which remains thisclose to getting its masonry completed, with the second photo included mainly to give me an excuse to sneak in a shot of the scaffolded Capitol dome. 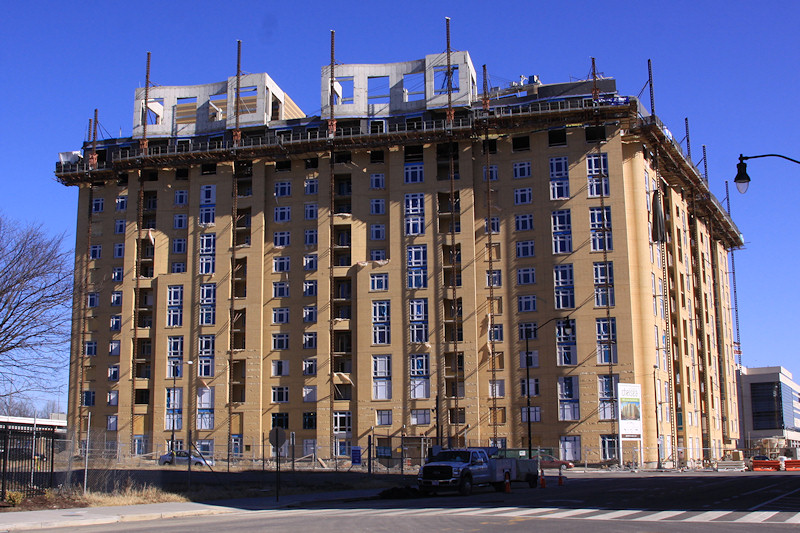 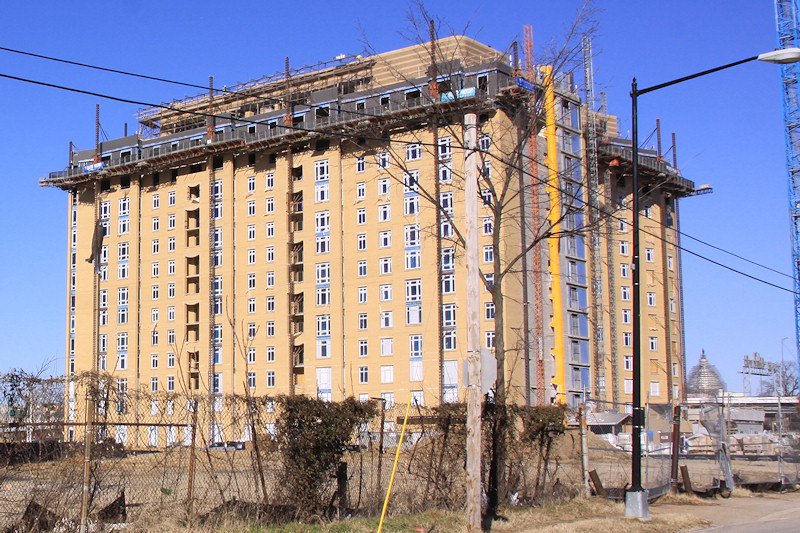 If you like photos of vertical construction against a deep blue sky, stay tuned.
* But, hey, 11,000 steps!
Jan 21, 2014 9:00 AM
Tuesday Tidbits: Speeding on By
* TEETER AND VIDA: At last week's BID meeting, Michael Stevens said that Forest City would soon be "handing the keys" to Harris Teeter to begin their build out at the north end of Twelve12. And apparently the Vida Fitness space on the south end of the block will be turned over very soon to its tenants as well. Vida is looking at a summer opening, and Teeter in the fall. And leasing for the apartments themselves should start this spring.
* WHOLE FOODS: Meanwhile, at that other grocery store/residential site, I'm told that some initial infrastructure work is already underway (probably hard to really differentiate it with all the work going on at the Park Chelsea next door). The plan is still for 800 New Jersey/Whole Foods to officially get underway this spring, probably in March (which so often is the month that a developer's thoughts turn to excavation).
* A VIEW OF THE PARK: And, speaking of the Park Chelsea, I can now offer this high-speed photo of the construction from a different vantage point from usual (and no, I didn't walk up onto the freeway):

Of course, this view of the Park Chelsea will only last until 800 New Jersey starts sprouting in the spot in between this construction and the freeway.
* FREEWAY VISTAS: It's been a while since I've updated my skyline-from-the-freeway images, but I did get them this weekend. I would suggest taking a look at the whole lot, but this is probably the best comparison, of January 2005 to the present:

At center of the new image is the River Parc residential building speeding along next to Velocity. But these two don't even tell the entire story of the eight years that passed between them--check out the complete lineup of images from this angle to see the other buildings that went up since 2005 but are now obscured.
But really, check out all the before-and-afters I've taken from the freeway at South Capitol over the past 14 years, and click on the

icons to see the progressions.
* THE CRAZY AUNT AND HER SLIDES: Sunday was the 11th anniversary of that fateful drive around the neighborhood that resulted in some photos on my web site, and then yadda yadda, here we are. So of course I have to point you to those pictures. (Though yes, technically I took my first photos of the area in fall 2000, but those were on bad film and I didn't even rediscover them until 2004.)
***UPDATE***: Adding on to this post with the news that Bluejacket and its much-touted head brewer Megan Parisi have parted ways, according to the Post.
Sep 29, 2013 4:02 PM
Catching Up on Photos - Twelve12
Work is speeding along at Twelve12, the apartment-Harris Teeter-Vida Fitness project at 4th and M at the Yards: 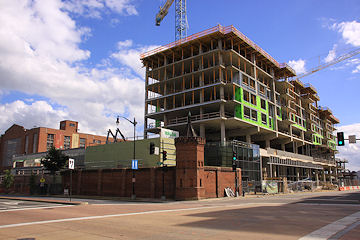 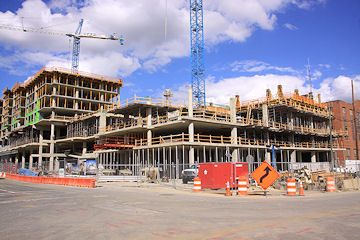 The Teeter portion of the building is even getting some windows: 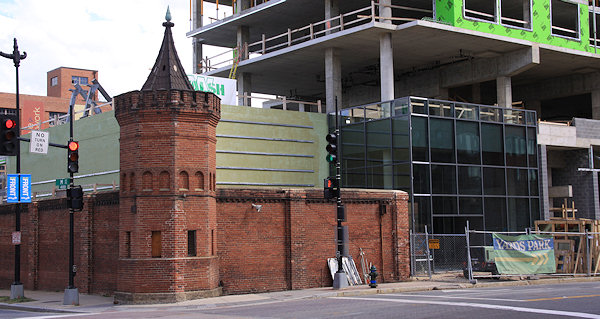 See before-and-after photos and information about the project here.