peek >> << back
Near Southeast DC Past News Items: bww
Advertise on JDLand 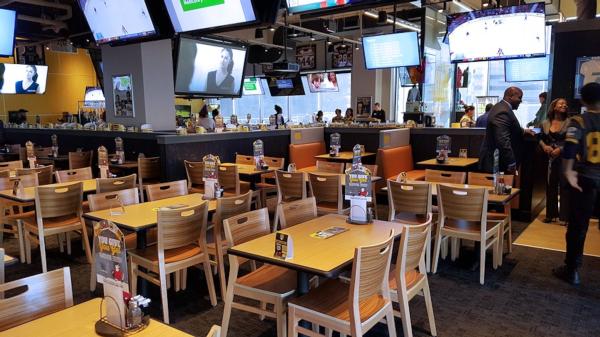 With the enticement of coupons for a free order of wings each week for 52 weeks for the first 100 people in line helping to bring a crowd at 10 am on a Monday, the city's first Buffalo Wild Wings opened this morning at 1220 Half St. SE, immediately to the south of the Navy Yard-Ballpark Metro entrance and not too far from the main gates at Nationals Park.
Ward 6 council member Charles Allen was on hand to cut the ribbon for the restaurant, which is employing about 130 DC residents, including many whom live very close by in Southwest or Southeast.
It opens daily at 11 am, and stays open until 1 am Fridays and Saturdays and midnight the rest of the week.
Here's a few quick photos of the festivities, with the full batch in this gallery. 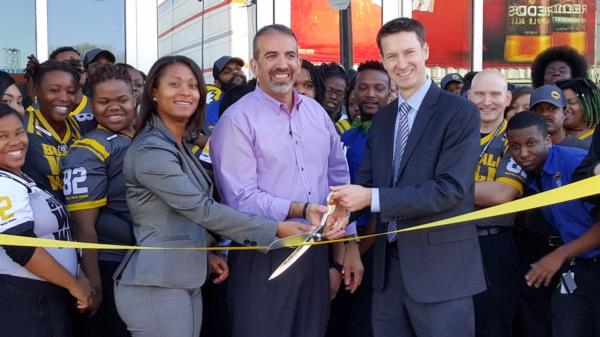 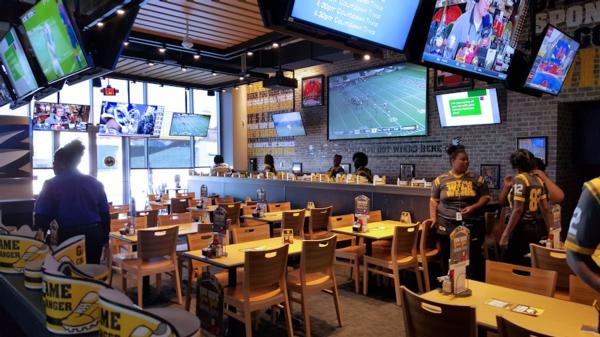 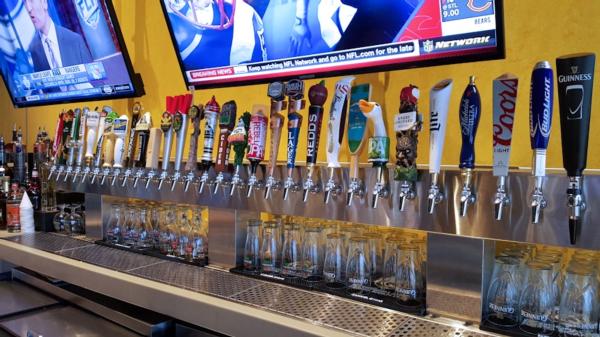 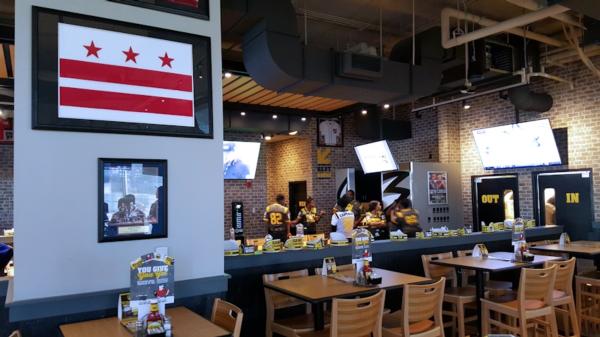 Nov 10, 2015 8:23 AM
Project Updates: The Getting-Closer Lineup
While the appearance of a canopy over a front entrance does not signal that an under-construction apartment building is ready to start welcoming residents next week, it's still an interesting progress point to see at both the Park Chelsea and Arris residential projects. There's also landscaping starting to go in along the Park Chelsea's sidewalks on both New Jersey and would-you-just-open-already I Street--plus the leasing countdown clock has remained set for January 2016 for a few months now. As for Arris, the latest word remains "early 2016" for when it will open--and 2016 just isn't as far away as it used to be. 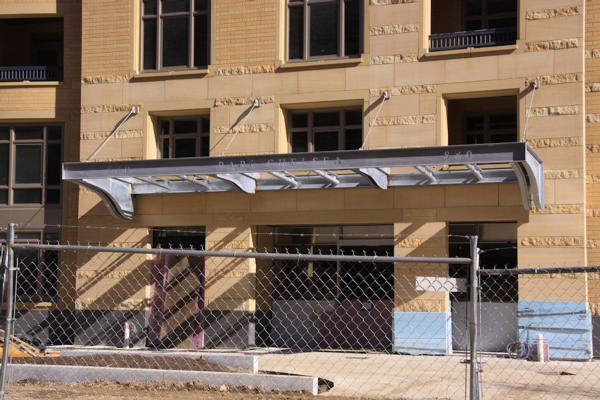 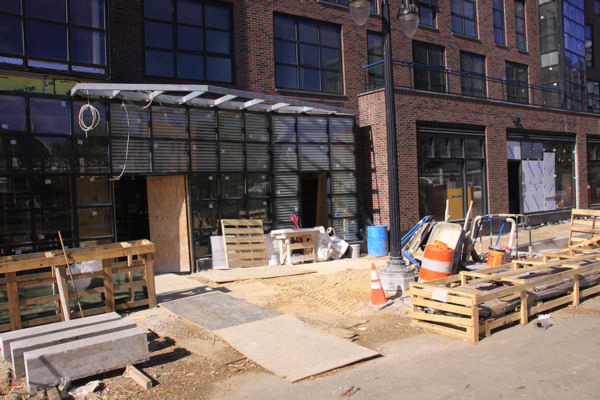 To the east, the not-minor project to do the masonry work and the siding at the 195-unit mixed-income Lofts at Capitol Quarter at 7th Street continues--apologies for only showing the rear of the building when I take a wide shot, but with the trees and the narrowness of L Street it's basically impossible for me to get a good photograph of the front. (Plus the low sun angle from late October through early March makes southern-facing photos a pretty miserable experience with a pretty miserable outcome, anyway.)
At 5th and K, the Capper Community Center's exterior isn't changing too much at this stage, but I'd get the shakes if I tried to not photograph it.

At New Jersey and Tingey, the new trapeze school building's blue-and-white exterior is mostly finished, though I'm such a bad blogger that it didn't occur to me to walk up to the big opening and peek in--but TSNYDC has posted a photo of the inside.
As for the Brig, the beer garden-to-be at 8th and L, the building itself looks pretty well finished now, though the "garden" portion of the venture does not appear to have gotten underway yet. And with two pit bulls on guard (!), I wasn't about to poke my camera through the fence for a better view.
And while I had designs on pressing my camera up against the glass at Buffalo Wild Wings on Half Street, they were having a staff training session when I arrived, and so I chickened out (Bad Blogger Data Point #2). But the gentleman I spoke with there confirmed again the Nov. 16 opening date, saying that the doors will open that day at 10 am--and that they generally have people camping out over Sunday nights to be among the first 100 customers through the door, who are then winners of the free-wings-once-a-week-for-a-year prize. Hope y'all have warm sleeping bags! 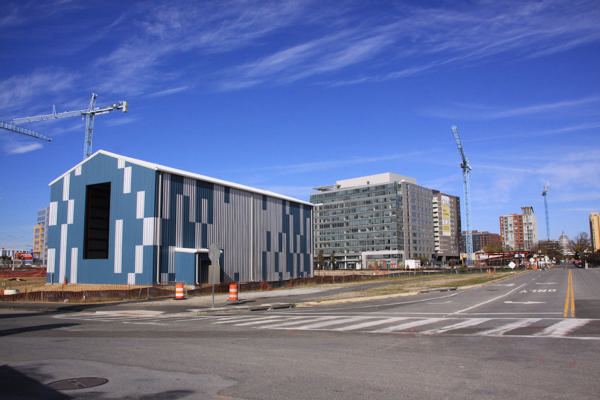 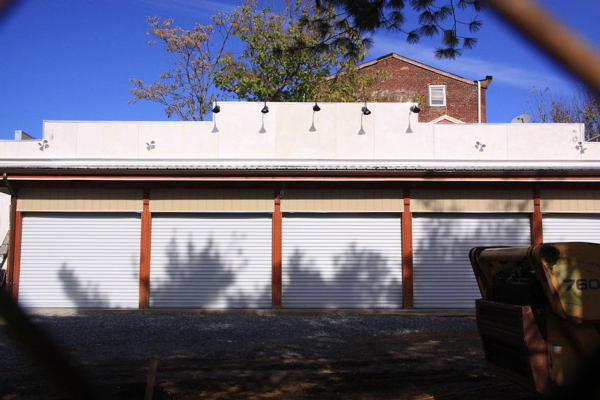 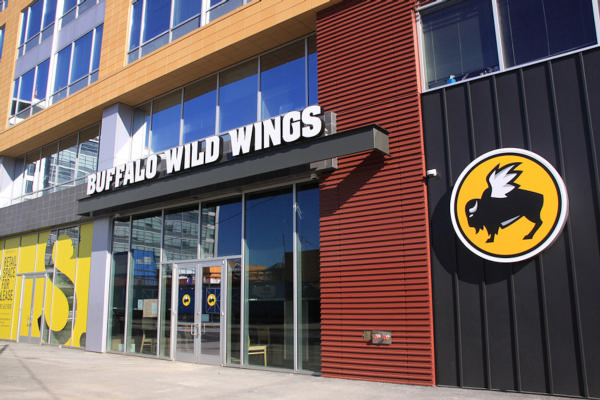 Still to come, the skeletons-and-holes report.
Nov 5, 2015 4:28 PM
Thursday Tidbits: The Getting Overwhelmed Edition
These deserve their own posts, but time is tight these days. (And given the forecast, I'm guessing there will be a couple hundred new photos for me to wrangle this weekend as well.) 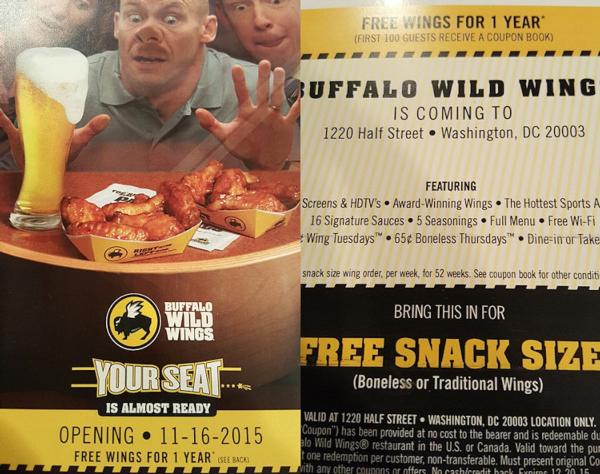 * WILD WINGS DATE CONFIRMED: A mailing and also a source In the Know have confirmed that Buffalo Wild Wings will be opening at 1220 Half St. SE on November 16, with a ribbon cutting as well as free wings for a year* for the first 100** guests. (*Meaning 52 coupons to use once a week on a snack-sized wings offering.) (**Probably only 99 of you have a shot, because one JDLand reader is already staking a claim.)
* VIRGINIA AVE. STREETSCAPE: The final concept plan for sprucing up Virginia Avenue after CSX is done with tunnel construction has been posted by ANC commissioner Meredit Fascett. One big change: the new planned cul-de-sac on I Street east of 4th that sounded like it was going to disappear is in fact going to be part of the final plan. Public comments are being accepted by DDOT through tomorrow (Friday, Nov. 6), and the DDOT Public Space Committee will evaluate the plans at a Nov. 12 meeting.
* PRESERVATION GRANTS: Speaking of the tunnel, there is a Preservation Initiatives Fund that will be distributing funds near the tunnel project to "preserve, restore, research, identify, evaluate, interpret, or otherwise benefit historic resources within the project area." The money is coming from CSX and is being administered by the DC Preservation League as part of the project's mitigation offerings. The deadline to apply for a grant is Dec. 4. More in this flyer, including which blocks are part of the "area of potential effects" (including quite a few north of the freeway).
Nov 1, 2015 10:30 AM
Park Tavern Closed for Retooling; BWW Getting Close Papers have gone up to cover the windows of the Park Tavern at 2nd and M in Canal Park, with a sign up saying they are closed for renovations. I've sent an inquiry (given that the restaurant's social media feeds and web site remain silent), but my understanding from other sources is that this is more than just a freshening of the decor--one reader says he was told that it will be reopening as a pizza-based venue.
With construction underway on the Canal Park ice rink, scheduled to officially open for the season on Nov. 14, this would seem to be a good time frame for a retooling. 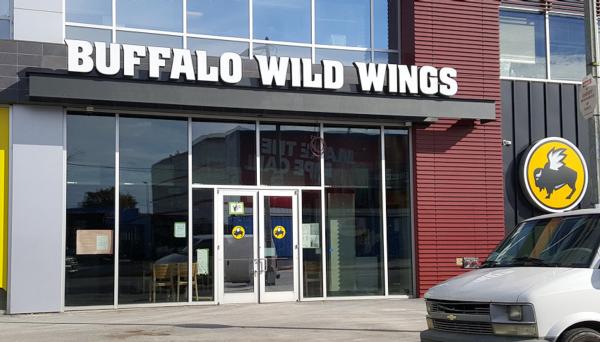 In the meantime, over on Half Street just south of the Metro entrance at M Street, Buffalo Wild Wings is looking close to opening. A worker told me that staff training is expected to start this week, with November 17 being the *targeted* opening date. Though, of course (all together now), We Shall See.
UPDATE: It actually looks like Nov. 16 will be the grand opening (the date I heard many moons ago), with this mailing providing the big hint but also according to sources In the Know.
(PS: There are tentative thoughts about a JDLand happy hour in the coming weeks, probably at BWW. More as the schedule becomes clear.)
Oct 8, 2015 9:35 PM
Pacers Running Opening Oct. 21; Buffalo Wild Wings Nov. 16

* PACERS RUNNING: I can't do much more than repeat what the tweet says, that Pacers Running is opening at the Boilermaker Shops at 3rd and Tingey Streets SE on Wednesday, Oct. 21, joining Wells Cleaners, GNC, EVO Furniture, and Unleashed by Petco as non-food retail at the Yards.
* B-DUBS: The latest BID newsletter says that Buffalo Wild Wings "anticipates" opening its location on Half Street SE just south of M Street on Monday, Nov. 16. The BID also says that the first 100 guests will each receive 52 coupons good for once-a-week orders of snack-sized traditional or boneless wings. The restaurant's space is in the ground floor of the 55 M Street office building, just south of the Navy Yard-Ballpark Metro station entrance.
Aug 31, 2015 7:47 AM
RIP Sizzling Express, and More Tidbits of the Food and Drink Variety
Continuing to catch up.... * SIZZLING EXPRESS CLOSED: The handwriting was no doubt on the wall the instant that Harris Teeter and its vast food bar/carryout options opened up a stone's throw away, but it's still a little sad to see that the Sizzling Express at 4th and M SE closed for good in mid-August. For quite a while it was the only "new" food offering in the neighborhood, having arrived in the ground floor of 300 M at some point in 2001 or 2002. No word on what might someday arrive in its place.
* DUE SOFT: In case you haven't yet ducked into Due South, the neighborhood's newest restaurant, at 3rd and Water, SE, be advised that it has been and is still operating in "fine-tuning mode," with a limited dinner menu and drinks. It expects to become fully operational on Tuesday, Sept. 8, opening daily at 11 am for lunch and dinner along with weekend brunch.
* NOVEMBER WILD WINGS: A little birdie has told me that Buffalo Wild Wings is working toward an opening date of November 2, though we know how I feel about the validity of estimated restaurant opening dates more than about three days in advance. (If you haven't been paying attention, they are coming to Half Street SE just south of the Metro station entrance.)
Jul 21, 2015 3:24 PM
Scarlet Oak Close to Opening, and Other Almost-y Food Tidbits 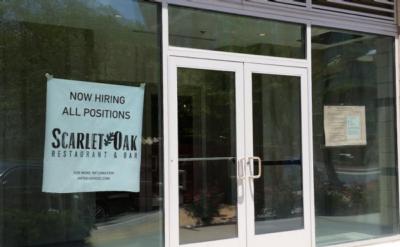 My dad always says that "almost only counts in horseshoes," but I won't let that deter me from a few Almost Tidbits:
* SCARLET OAK, ALMOST: With this tweet earlier today, Scarlet Oak let it be known that it is close to opening, with a soft opening expected "next weekend" and a "grand opening soon to follow." The modern American restaurant and bar on the northwest corner of New Jersey and K comes from the same folks who brought you Southern Hospitality in Adams Morgan.
* DUE SOUTH, ALMOST: HillNow quotes a Forest City prediction that Bo Blair's Due South southern restaurant will "likely" open in the Lumber Shed in August. We Shall See.
* BDUBS CONSTRUCTION, ALMOST: A little birdie tells me that the Buffalo Wild Wings folks have said that the hope is to have its new Half Street location open by October (let's see, what else happens in October?), and that construction should start within the next few weeks.
* ANOTHER COFFEE SHOP, ALMOST: The official Yards twitter account lamented last week's loss of Buzz Bakery, but then added, "Fear not coffee aficiandos! We have a new coffee shop in the works." My understanding is that an announcement should be made in the coming weeks (along with perhaps some other retail announcements).
Jun 11, 2015 10:24 AM
Buffalo Wild Wings Looking to Come to Half Street Near Nats Park 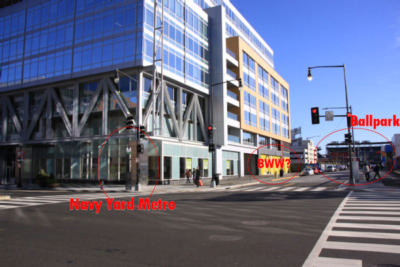 After weeks of not-especially-sly references to this in my comments threads, I can now report that national eats-and-brews-and-whatnot chain Buffalo Wild Wings is looking to take about 6,000 square feet of ground-floor space on the block of Half Street SE between the subway station entrance and Nationals Park.
A tenant layout permit for a restaurant in 55 M has recently been applied for, referencing an occupancy of 233 seats/260 total, but my understanding is that no lease agreement had yet been signed with the owners of the 55 M Street office building where the space is located.
If this all does come to fruition*, retail space that has sat empty for five-plus years while millions of people trekked past may be finally getting a tenant.
* Exercising my normal amount of caution, given the lack of a signed lease or official announcement.