peek >> << back
Near Southeast DC Past News Items: agua
Advertise on JDLand 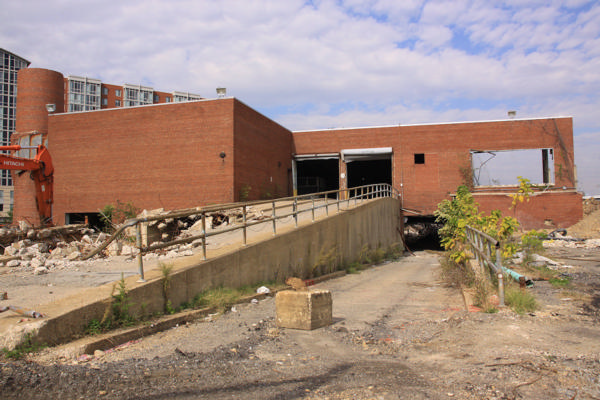 One of the things that makes me sometimes fail at posting tidbits is that there just aren't necessarily any good photos to go with the items, and then I lose the will to continue. So I'm now making an executive decision that I'll just hit the archives for calendar-appropriate photos when necessary. Hence, this completely unrelated photo from Oct. 6, 2012, showing the demolition progressing at the old trash transfer station. I actually find it hard to believe it's only been three years.
* GARBER GREET: DC council at-large candidate and neighborhood alumnus David Garber returns to #NavyYard today (Tuesday, Oct. 6) for a meet and greet at the Big Stick at 20 M St. SE starting at 6 pm.
* RIVER RIDE: As part of Mayor Bowser's FitDC health and wellness initiative, there will be an eight-mile bike ride through Anacostia Park on Sunday, Oct. 11, at 2 pm. If you haven't ventured across the way to use the eastern part of the Anacostia Riverwalk Trail, this might be a nice introduction to it. (Those of us already familiar with it are now just tapping our toes waiting for the Kenilworth Aquatic Gardens segment to open, hopefully next year, though I now see "Fall 2016" as the date.)
* AGUA ATTENTION: It isn't technically neighborhood news that Zest Bistro on 8th Street SE has apparently closed its doors, but within the statement about the closure is the tidbit that the owners "look forward to the opportunity to focus solely on our most recent venture, Agua 301."
* POLL PESTERING: C'mon, you know you'd rather click a few radio buttons and checkboxes on the JDLand Reader Poll than work! Plus there's at least one tight race in one of the Favorite Lunch/Dinner/Bar categories, so every vote counts.
Mar 18, 2014 5:27 PM
Tuesday Tidbits: Preposition Edition
This week's offerings are definitely quite tidbitty: 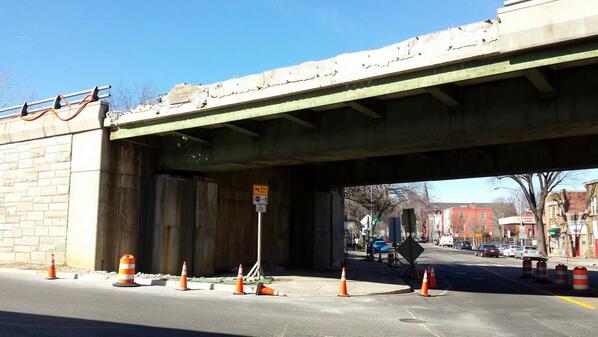 * KNOCKING DOWN: No time has been wasted in starting the demolition of the old inbound flyover from the 11th Street Bridge, as seen in the photo at right.
* FILLING UP: WBJ looks at the ever-widening selection of local beers at Nats Park.
* MOVING IN: There's been a change in the kitchen at Agua 301, with chef Will Vivas (formerly of Recess Tapas Lounge) taking over from original executive chef Antonio Burrell. A press release says that "mainstay" items will remain (like the pork belly tacos), but that "Vivas is developing new selections based on his South American background and training."
* TOPPING OUT: Nats owner Mark Lerner says he doesn't believe the roof the team proposed for the ballpark is going to happen. (WaPo)
* COMING BACK: In case you were concerned, the Bullpen bar at the Fairgrounds at Half and M is returning for another season, beginning on Opening Day (April 4). And yes, this includes Truckeroo, too.
* CROSSING OVER: Greater Greater Washington looks at the possibilities and pitfalls of the proposed 11th Street Bridge Park. The design contest for the park is scheduled to kick off on Thursday. And the project has a spiffy new web site, too.
* CHECKING OFF: Early voting for DC primary elections has begun at One Judiciary Square, with it expanding on Saturday, March 22, to 13 additional sites across the city, including nearby King Greenleaf Recreational Center. April 1 is just around the corner!
Feb 11, 2014 9:17 AM
Tuesday Tidbits: Flaky and Distracted
A looming snowstorm will always divert my attention, but before the flakes fly, here's a few tidbits: 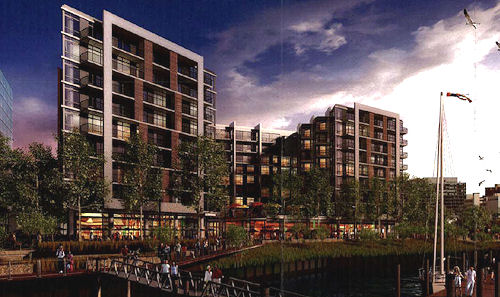 * I was not there, but the developers of the Florida Rock site apparently told Monday's ANC 6D meeting that they are looking at a June start of construction for the project's first phase, a 350-unit residential building. However, no building permit applications have been filed yet, with one reason being the need for some curb cut approvals, which the ANC voted to support. So, We Shall See.
* SWill reports that a developer is in the planning stages for a 260-unit apartment building on South Capitol Street across from Nationals Park, just north of the Camden building that opened last year. There are older rowhomes on the north end of the block, some or all of which could be incorporated into the project in some way. However, this is technically outside of my boundaries, so other than snapping photos of what will come, I'll be leaving this to Will to cover.
* I feel like I've already mentioned this, but in case I haven't, a raze permit has been filed for St. Matthew's Baptist Church on the southwest corner of New Jersey and L, to make way for Donohoe's 1111 New Jersey residential project. UPDATE: And commenter Alan below adds the tidbit that the church's message board out front now says "Looking for our perfect home."
* Washingtonian had very good things to say about Osteria Morini, while the Post's Tom Sietsema waxes saltily on Agua 301.
Dec 16, 2013 12:14 PM
A Sneak Peek Inside Agua 301, Now Opening Dec. 21 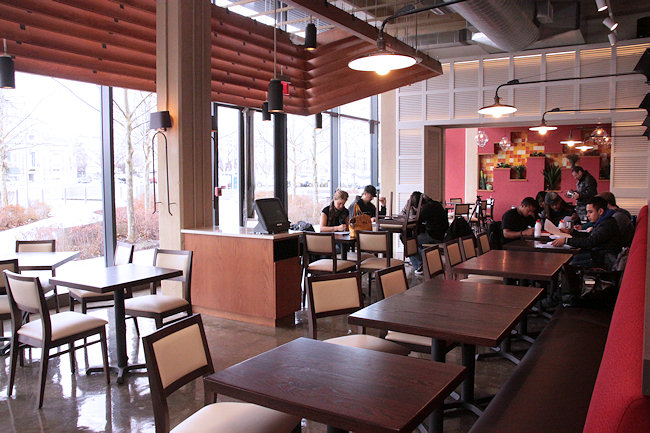 With Agua 301 now set to open at the Lumber Shed in the Yards Park on Saturday, Dec. 21 (a day later than reported last week), of course I had to get inside with camera in hand to check it out.
I was sidestepping a busy crew of people still getting everything in place, so the images do not have the sheen of a minutes-from-opening space, but you can see the layout and take in the views that the various tables will have. (I even tossed in one "before" photo, which is just a teensy bit different.)
The modern Mexican restaurant will begin with just dinner service, expanding to lunch and then brunch probably at the beginning of next month. And in spring, an additional 44 seats will be available outdoors, along both the southern and western sides of the building. 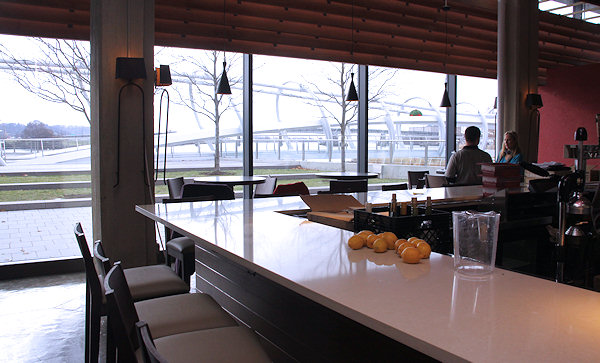 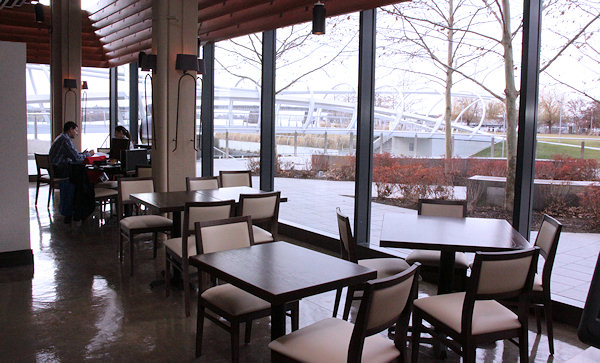 And this will bring to a close 2013's run of restaurant openings in Near Southeast--it takes some remembering that, one year ago, there was no Gordon Biersch, or Park Tavern, or Bluejacket, or Buzz Bakery, Osteria Morini, or Nando's Peri-Peri.
As for what 2014 will bring, expected openings include Nicoletta, 100 Montaditos, Willie's Brew and 'Que, Sweetgreen, and TaKorean.
Dec 11, 2013 3:02 PM
Agua 301 Reportedly Set to Open on Dec. 20 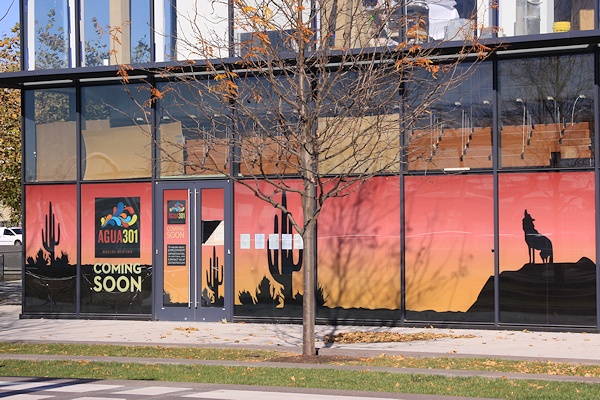 City Paper's Young and Hungry blog is reporting today that Dec. 20 is the expected opening date for Agua 301, the Mexican restaurant by the Zest folks on the southwest corner of the Lumber Shed in the Yards Park, next door to Osteria Morini.
CP says that the menu will have a "modern Mexican bent with a few less traditional touches." Tacos? Si! Small plates? Si! Guacamole? Si! Margaritas? SI! (But probably not fajitas, burritos, or enchiladas.) There will also be large entrees such as pan-seared black bass in case a small plate of beef barbacoa flautas doesn't quite fill you up.
The restaurant is expected to be open just for dinner to start, adding lunch and brunch service in January. And in the spring there will be 44 seats of outdoor patio seating, to take in the views of the Anacostia River.
Mar 12, 2013 9:54 AM
Agua 301 Shooting For July Opening at Lumber Shed 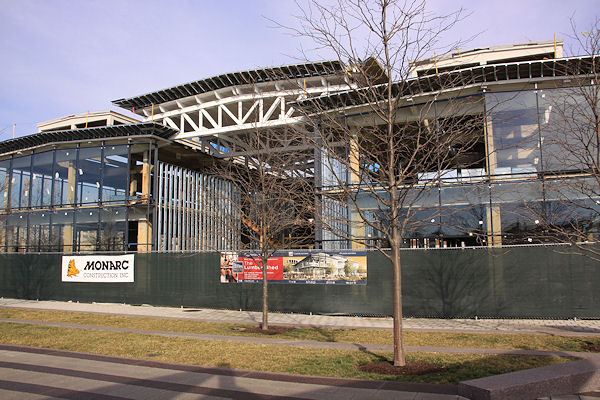 The Washington Business Journal has a short piece on Agua 301, the "modern Mexican" restaurant coming to the Lumber Shed at the Yards Park.
The restaurant, developed by the same people who run Zest Bistro on Barracks Row, will be on the building's southwest side (the left side in the photo at left, closest to the pedestrian bridge), and buildout is apparently now getting underway, with the owners "hoping for" a late July opening.
It is a 3,500-square-foot space, and will have 107 seats indoors, plus another 43 on the patio.
So, let's do a run-down of the next few months:
Canal Park's Park Tavern could be close to opening {ahem}, so let's call that March.
Gordon Biersch is aiming for Opening Day, April 1.
Bluejacket says "May/June" for its highly anticipated arrival at the Boilermaker Shops.
Nando's Peri-Peri says June for its opening, also at the Boilermaker Shops.
Agua shooting for July.
No dates other than "summer" have been announced recently for Osteria Morini, Chef Michael White's Italian restaurant planned for the southeastern corner of the Lumber Shed. So, August or September might not be out of the question, though until a buildout is underway, that would just be speculation.
Also no dates for Buzz Bakery or Willie's Brew and Que at the Boilermaker, though since Buzz is by the Bluejacket folks, perhaps it'll come around the same time? UPDATE: A Facebook commenter passed along this Hill Rag piece by the Capitol Riverfront BID's director, saying that Buzz is aiming for an April opening. Willie's remains a mystery, though.
Anyway, basically one new restaurant a month from now through summer is a little bit different from what the neighborhood has seen since, well, ever. (Though, of course, we know how targeted opening dates can sometimes slide...)
For Nats fans doing a little preseason salivating, here's my map of where the neighborhood's restaurants are, and will be. (If you haven't been to the neighborhood since last season ended, you'll also want to note the arrival of Kruba Thai and Sushi at 3rd and Water Streets, in the Foundry Lofts building at the Yards.)
Nov 29, 2012 3:05 PM
Agua 301 Restaurant Coming to Yards Lumber Shed 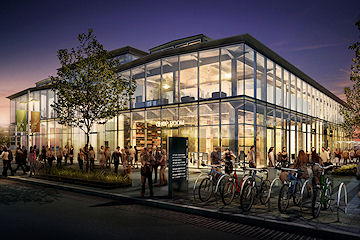