5 Blog Posts Since 2003
Nov 19, 2009 5:14 PM
Casa Degli Angeli Denied Zoning Change
The long-vacant apartment building on the northwest corner of Third and L that was resurrected earlier this year as "Casa degli Angeli," a nautical-themed short-term rental operation, lost its bid last week to become a bed and breakfast, when the Board of Zoning Adjustment was forced to deny the operator's request for a variance. As spelled out in the Office of Planning's report on the case, the Casa would not be meeting the standards for an "accessory use" because the building's owner would not be living there, plus the plan to rent out seven bedrooms (making it more of an inn than a B&B), would run counter to the intent of the zoning regulations that allow only limited non-residential uses in residential zones.
The four BZA board members were apologetic, clearly feeling that the idea to run the building as a B&B was at heart a good one, but that the city's regulations clearly precluded them from approving the request. (Here's the video of the hearing; I used the nifty "TinyClip" option to link to just this portion of what was otherwise a very long hearing.)
Casa's propietor, "Captain Apollo," tells me that he intends to continue to run the building as a short-term 30-day rental building, and will still be attempting to turn it into a B&B at some point down the road.
Oct 19, 2009 8:56 PM
ANC 6D Doings (Short Version: Three Thumbs Up)
While my dinner is in the oven, here's the speediest of reports from tonight's ANC 6D meeting:
* The ANC voted 7-0 on a resolution supporting the city council's proposed marriage equality act.
* They voted 5-2 to support Florida Rock Properties' pending request in front of the Zoning Commission to extend the deadline for the first building permit application at RiverFront two years, to June, 2012, which would push the deadline for the start of first-phase construction to 2013. (Read this entry for more details, and see my project page for specifics on the development itself.) It's expected that this will be taken up at the November 9th ZC public meeting.
David Briggs of Holland and Knight, representing FRP, said that while the developer has worked "assiduously and tenaciously" since last year to find either equity or construction funding, the notion of starting the first-phase office building within the current zoning timeline is "just not viable." FRP does say, though, that they will be continuing to search for funding if they receive the extension. In the meantime, FRP made its required $800,000 payment to the city last fall to help defray the costs of Diamond Teague Park next door; I asked if there were any possibility that perhaps the land on the very east end of the Florida Rock site, which will eventually be a public plaza that abuts Teague Park, might be cleared and opened as public space before the construction begins on the office building--they're "looking at options."
* The commissioners also voted 7-0 to support the zoning special exception request by the operator of the six-unit "Casa degli Angeli" at Third and L, which is currently operating as a month-to-month room rental and which is looking for a zoning change to become a full-fledged bed and breakfast. The Board of Zoning Adjustment hearing is scheduled for Nov. 17.
Oct 18, 2009 2:49 PM
RiverFront/Florida Rock Seeking Time Extension From Zoning Commission; More Zoning, CSX, CapitalSpace 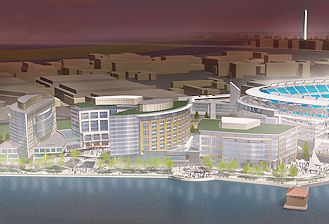