peek >> << back
Near Southeast DC Past News Items: allpurpose
Advertise on JDLand The party's over, the All-Stars have gone home (except for the three who already live here), and it's time to catch up on a few things that were easily missed during the five-day brouhaha.
* HATOBA: The neighborhood will finally get a ramen outlet in early 2019, when Hatoba opens in the old 100 Montaditos space in the Boilermaker Shops at the Yards. (You may have caught their pop-up with "Japanese hot dogs.") Washingtonian has more about this fourth venture from the team behind Daikaya, Bantam King, and Haikan. (And apparently "hatoba" means "dock.")
* EL BEBE: There's finally an official replacement for Open Road as Circa's sibling in the ground floor of the 99 M office building at 1st and M, and that's "El Bebe," which is billing itself as "tacos and tequila." Eater DC has more, including that both Bebe and Circa are shooting for a "late 2019 2018" opening. {fixed my own typo}
* WALTERS: The sports bar in the ground floor of 1221 Van isn't coming until next year, but they tweeted out this rendering of the planned interior.
* ALL-PURPOSE: Their rooftop is now open.
* DEEP DIVES: The Post had a long piece this weekend on the neighborhood 10 years after the ballpark's arrival (with some photos that will look familiar), and Washington Monthly has a long and interesting look at Business Improvement Districts, with a focus on the Capitol Riverfront BID.
* CAPPER MEETING: The DC Housing Authority is having a public meeting to give an update on the status of the Capper/Carrollsburg redevelopment on Wednesday, July 25, at 7 pm at the Capper Community Center, 1000 5th St., SE. I imagine this will discuss the remaining three blocks of the redevelopment footprint, which are planned as mixed-income residential buildings, including one condo building, if that is still on the boards. (UPDATE: The 25th is the correct date, but the flyer called it Tuesday instead of Wednesday. Waiting for an updated flyer.)
* BRIDGE SURVEY: Interested in the new Douglass Bridge? DDOT wants to hear from you in this survey.
* ME ME ME: I always feel weird about including these links, but if you want the quick version of how this crazy project came to be, read Urban Turf's look at the "Unofficial Historian of the Ballpark District."
Mar 26, 2018 3:35 PM
What's New Outside Nationals Park for 2018

Today was the annual preseason media tour at Nationals Park, and while I did attend, I think it has been better covered elsewhere, so I am just going to stick to my wheelhouse and let folks know what they will see *outside* the ballpark when they venture to Half Street for the first time in 2018, whether it's for tomorrow's signs-point-to-frigid exhibition game at 4:05 pm against the Twins, or for the official home opener on April 5 against the Mets.
I've put together my annual What's New page with an overview of the latest on construction, development, and food offerings, but of course I must give an overview of the overview: 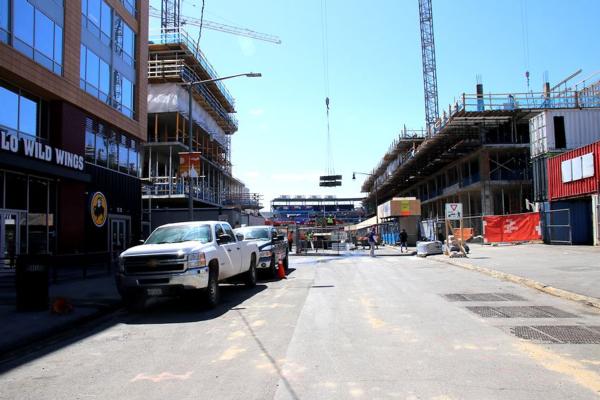 I think it's safe to say that even the less observant fans will notice that Half Street is now undergoing the change that has been expected for a decade, since the ballpark opened officially on March 30, 2008. Two residential projects that will eventually offer a combined 850-plus units and more than 120,000 square feet of retail are now sprouting vertically, with West Half edging out 1250 Half for the lead at this time.
But these are just two of the seventeen projects currently underway or about to be, which you can see on the map at the top right of each page, or on the full JDLand development map. Once again, driving/walking/biking/scootering in the neighborhood requires vigilance to one's surroundings with all of the activity. If you like to see photos of skeletons or holes in the ground, just start clicking on that map to get your fill.
As for new food options since the end of last season, we'll start with a headline that came down the pike today, which is that All-Purpose has announced it will open on April 3 in the ground floor of Dock 79, just across Potomac Avenue from the ballpark. (Here's Eater's preview of the place.) There's also rumors afoot that two more pizza places--Declaration on 1st south of M and Oath Pizza at 110 M--are targeting April 5 for their own Opening Days. And summer is expected to bring another pizza offering, as Wiseguy Pizza arrives at Canal Park with not only pies but also gelato. 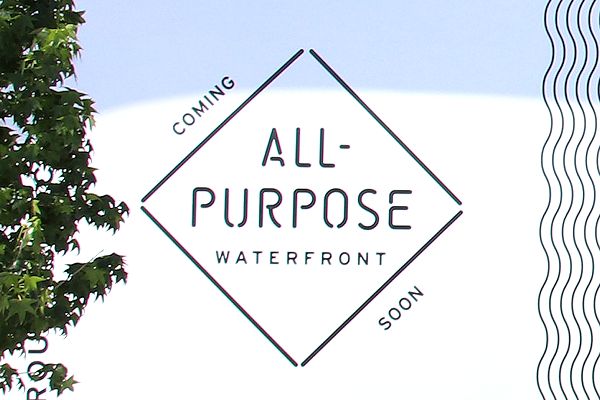 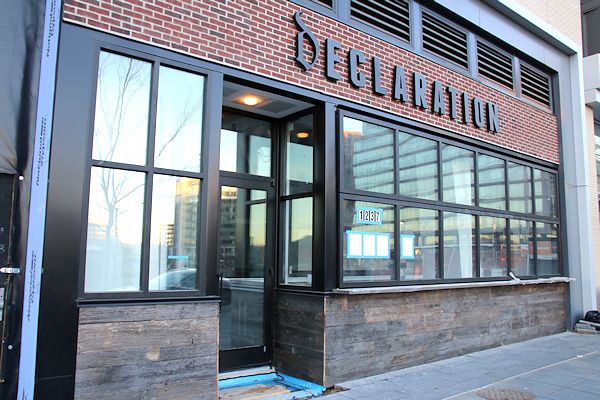 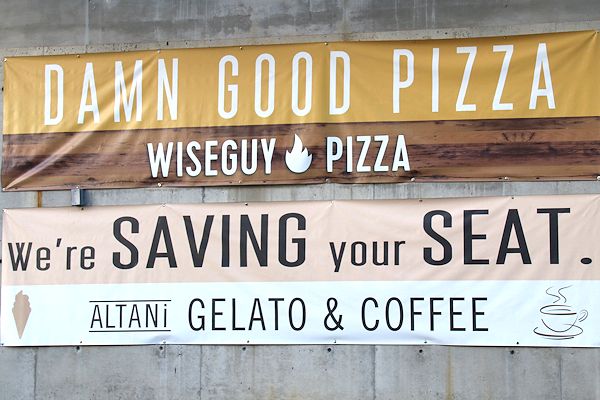 There will also be a milestone of sorts later this season if/when the 10,000-square-foot Mexican restaurant Mission Dos becomes the first outlet to open on N Street, in the ground floor of the new 1221 Van apartment building that opened to residents earlier this year directly across from the ballpark (well, directly across from one of the garages, but you get the idea). 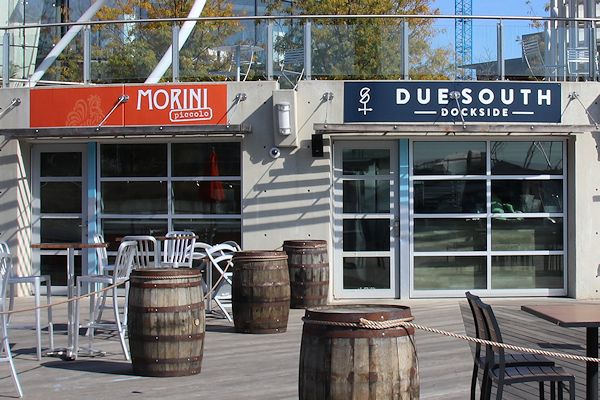 As for eateries that have opened since the end of last season, you can now add Chipotle, Roti, Rasa Indian Grill, Cava, and Chloe to your options if you're looking to get food and/or drink before and/or after a game.
Plus there's also the added riverfront options of District Winery, Due South Dockside, and Morini Piccolo if their mid/late-season arrivals last year didn't make it onto your radar.
See the JDLand food map for the full lineup of current and anticipated outlets east of South Capitol. It's come a long way from 2008.
There's also some other items to be anticipating, such as the start of construction on the new Douglass Bridge and other improvements to South Capitol Street on both sides of the river. There's also the no-really-it's-coming-we-just-don't-know-when opening of Whole Foods at New Jersey and H, which should be by the end of the year, but {insert shrug emoji}. Plus there's the impending arrival of Audi Field up Potomac Avenue, but it's in Southwest and so is outside of my purview (though I couldn't resist sneeking a peek today). 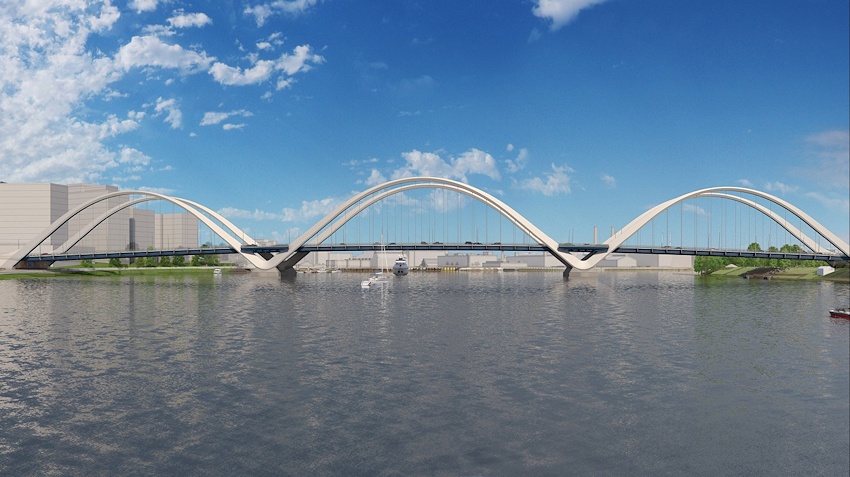 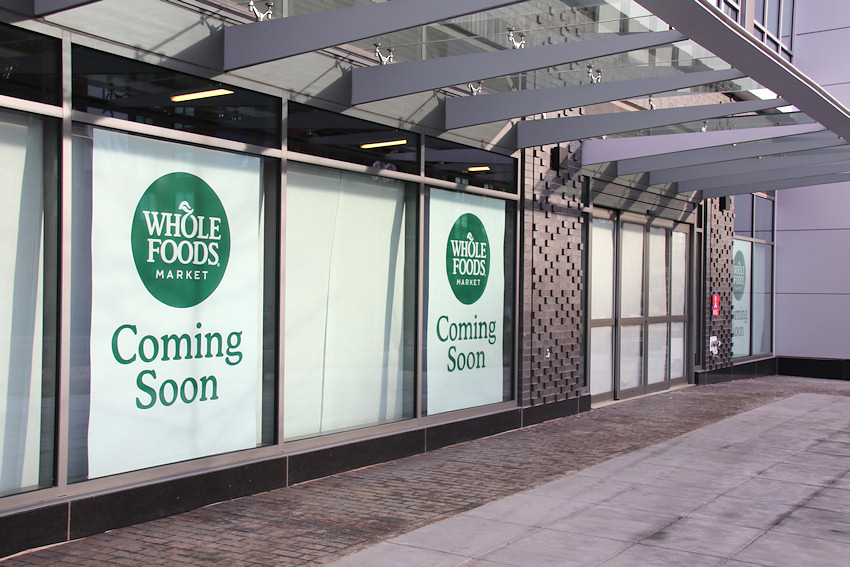 And I imagine I'll being doing something like this again in July, when the masses really descend on Natstown.
Play Ball!
UPDATE: I should have mentioned that I have made a very preliminary update to my Stadium Parking Map, but it's hard to really know the state of affairs until the season starts.There is one big change that is definite--the large surface lot at Half and I is no more, since construction is supposed to start Any Minute Now on a block-wide project there. There is underground parking across the street at One Hill South, though. But it's likely that parking is going to be a little tighter this year.
UPDATES II AND III: It's been announced today that the Aslin Beer Company will be creating a pop-up beer garden in the empty lot between the wings of the Hampton Inn at 1st and N, immediately north of the ballpark. It will first be for home games only, then may expand in May to other days as well. Also, it's being reported that Declaration has a sign in its window announcing that it will open on April 5.
Jan 27, 2018 5:26 PM
Wiseguy Pizza, Altani Gelato and Coffee Coming to Canal Park 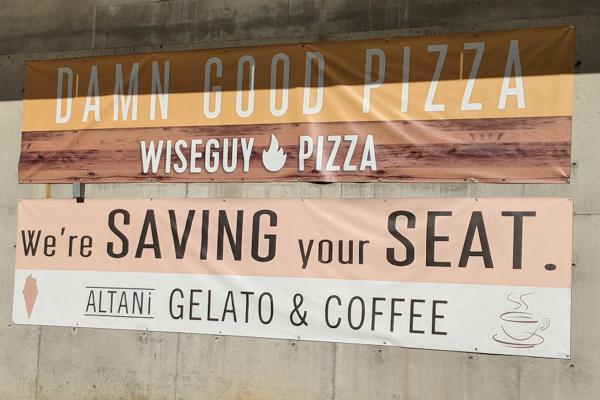 It's been a rumor rampant in the JDLand comment threads for a number of weeks, but this morning signage went up confirming that Wiseguy Pizza will be coming to the former Park Tavern/Il Parco space in Canal Park.
What was not rumored is that there will also be a gelato and coffee offering as well, which should go well with the space's location immediately next to the park's fountains in summer and ice rink in winter.
A JDLand reader on Twitter reports that the workers hanging the signs said that Wiseguy would open in about three months, but We Shall See.
This will be Wiseguy's third DC location.
In other neighborhood pizza news:
* All-Purpose tweeted last week that its Dock 79 location is opening "this February," and there is now a "Coming Soon" badge for it on its web site.
* Oath Pizza also now has a Coming Soon page for its location on M Street next to Bethesda Bagels in the ground floor of Insignia on M. interested parties can sign up for an invite to their (undated) grand opening.
* The build-out at Declaration in the ground floor of F1rst seems to be proceeding apace, as this photo from last weekend shows.
Oct 19, 2016 2:26 PM
A Belated Look at the New Plaza and Riverwalk Extension
It took a while for the weather and the calendar to successfully dovetail, but on Sunday the JDLand Camera finally got a look at the new plaza now nestled between Diamond Teague Park and Dock 79, as well as the extension of the Anacostia Riverwalk westward. (I missed out on the fountains, though.) 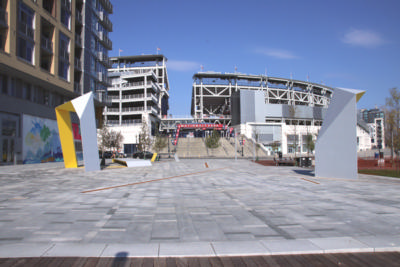 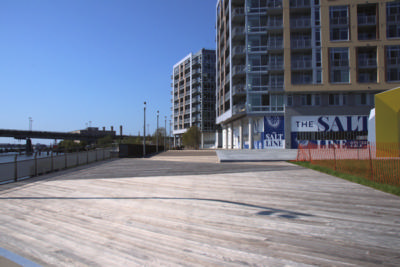 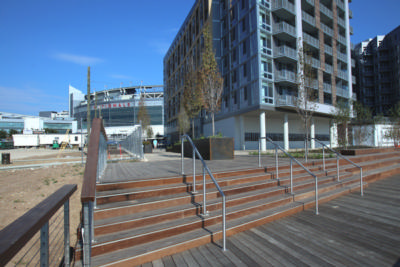 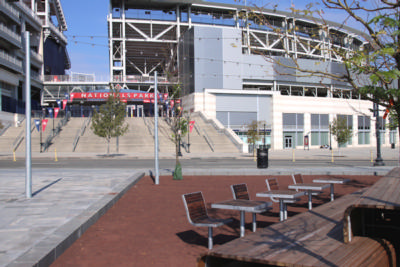 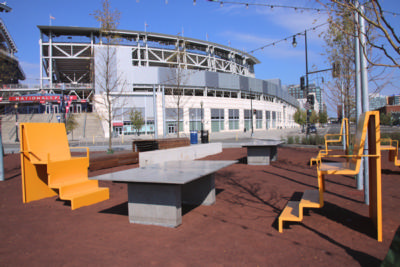 The second I posted the news of Slipstream I realized I had forgotten one other restaurant announcement* that slipped through recently while I was otherwise occupied, which is that All-Purpose Pizzeria has been announced as the second restaurant tenant at Dock 79, joining The Salt Line.
All-Purpose is another venture from the folks behind Red Hen an Boundary Stone, with its first location having opened earlier this year at 1250 9th St., NW.
That location is open six days a week for dinner, and the the menu has flights of cheese, cold and hot antipasti in addition to the centerpiece pizzas.
City Paper profiled All-Purpose back in May, describing the process with a 650-degree oven that results in a crust "crunchy on the outside, chewy on the inside, and sturdy enough for the 'New York fold hold.'"
*Though, if you are a wise reader of the JDLand comments, you would already know about this, since we discussed passing references to this without any official announcement back in May.
UPDATE: Washingtonian has additional details, including that there will be a separate takeout shop serving square Sicilian-style slices.