peek >> << back
Near Southeast DC Past News Items: amazonhq2
Advertise on JDLand


1 Blog Posts Since 2003
Apr 11, 2018 4:15 PM
Wednesday Tidbits: More Coffee!, Oath Open, Yards Phase 2, Um, News
Was out of town for a long weekend to participate in the induction of the late Mr. JDLand into the University of Arizona School of Journalism Hall of Fame, as part of its inaugural class. Now trying to get caught up (I say that a lot these days, I know):
* MORE COFFEE!: Because you addicted folks can't get enough of that witches' brew you all pretend to like, I'll mention that Eater has reported that Australian chain Bluestone Lane has signed a lease to open a coffee shop a 1,014-square-foot space in the ground floor of the 99 M office building that will also be home to Circa and Open Road. Here's the deets on the existing location in Georgetown. Both the building and Bluestone are expected to be finished later this year.
* OATH OPEN: They kind of snuck in without a lot of fanfare, but Oath Pizza is now open next to Bethesda Bagels on M Street between 1st and New Jersey, joining All-Purpose and Declaration, which both opened last week. Now we await Wise Guy Pizza at Canal Park.
* CHLOE REVIEW: The Post's Tom Sietsema gives Chloe his "good/excellent" rating.
* YARDS PHASE 2: I was kind of surprised at the volume of coverage earlier this week about the second-phase plans at the Yards, which mainly shows the power of sending a press release to every development reporter in town (though not me). If you've been following my posts about "Yards West" since, oh, early 2014, the plans for well over 1 million square feet of office space on the footprint of Spooky Park at 1st and M and two residential buildings on the current parking lots on the south side of N Street is not really anything new. But the press release attached a 2019 start date attached to this next phase, and it also passed along two renderings, including one showing what the release describes as a "six-block spine" beginning at a new plaza at New Jersey and M, extending all the way to the Anacostia River at Diamond Teague Park, described as "a vibrant pedestrian-friendly street, featuring ground-level retail and dining, extended green spaces and a variety of public gathering areas." In all, "Yards West" will have about 3 million square feet of mixed-use space across 18 acres.
Here are the renderings, showing the planned office building for "Parcel F," on the northeast corner of 1st and N, and the aforementioned "spine," looking south toward the river. 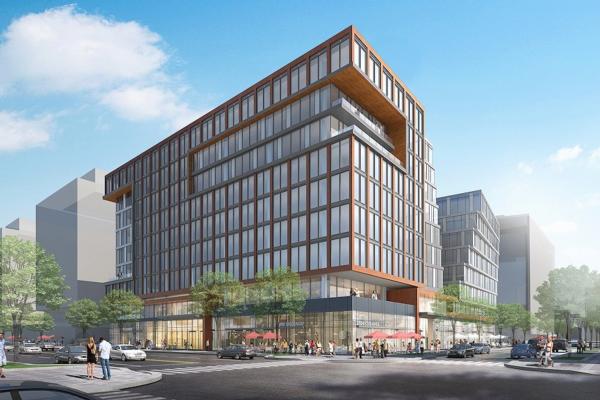 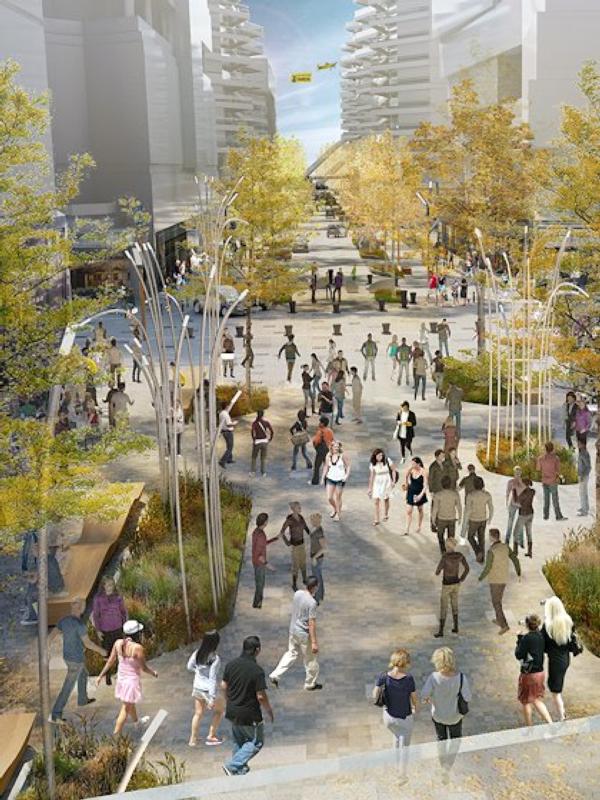 (And maybe that new plaza at New Jersey and M will include the dreamed-of third entrance to the Navy Yard Metro station, on the south side of M.)
But what if Amazon picks the Capitol Riverfront/Poplar Point HQ2 proposal, which includes these lots (seen on this map as locations 9 and 10)? Or is this a hint that it's not expected to be chosen? We Shall See!
* PARADIGM PART 2: WBJ reports late this afternoon that Paradigm has now purchased the rest of the block bounded by New Jersey, 1st, K, and L. This includes the Eagle Academy building and the taxi garage next door, on New Jersey. The company is just getting started with its 275-unit residential building at 1000 1st Street, on the west side of this block (known as Square 740), and apparently is planning a twin for the other part of the block.