It's hard for me to believe that this week marks three years since the first Opening Day at Nationals Park, but time does march on. Wednesday evening's NatsFest followed by three games against the Braves (starting with Thursday's 1:05 pm season opener) will bring a lot of people back to Near Southeast for the first time since last summer.
If you're one of them, and you haven't diligently been reading my posts (gasp!), you might be interested in knowing what's been going on since the last time you ventured into this neck of the woods. Here's the big items: 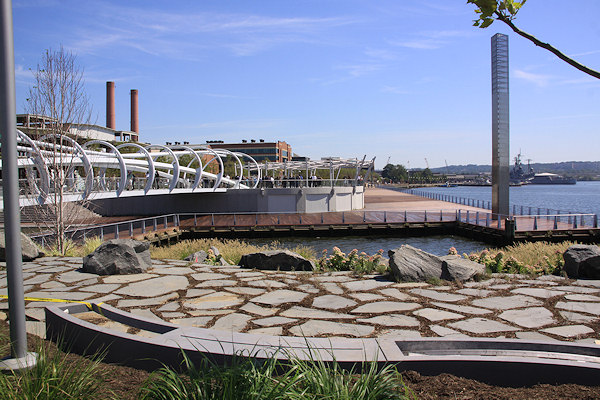 Yards Park: In early September, the first phase of the six-acre Yards Park opened on the banks of the Anacostia, just two blocks east of the ballpark. It's a space unlike any in Washington, and is definitely worth a visit, perhaps even on your way to Saturday's afternoon game, since the park is holding a Family Fun Day that starts at 11 am. (Even if you don't make it to the park right away, you can easily see it from the ballpark's southeastern viewing platform.)
It will probably be a neat place to watch the Friday night post-game fireworks as well (UPDATE: waah! no fireworks this year!), a trip which will be made even easier when a floating bridge connecting Diamond Teague Park--just across Potomac Avenue from the First Base Gate--with the Yards Park is completed, perhaps by the end of the season.
Unfortunately, most people visiting the park in conjunction with a Nationals game won't get to walk along the river all the way to 11th Street: while the Navy Yard has announced that its stretch of the boardwalk is opening April 1, the initial hours will only be from 8 am to 5 pm Monday-Friday.
Foundry Lofts: Just to the north of the new park, work re-started last September on the stalled Foundry Lofts building at 3rd and Tingey, and it is expected to be completed this fall.
Bullpen: It may not be ready by Thursday, but the open-air bar and live music gathering place across N Street from the stadium known as the Bullpen is opening a gameday beer garden to the north of its current spot, on the corner of Half and M across from the west entrance to the Navy Yard Metro station. With close to 80 picnic tables, it will have a capacity of over 600 and will offer European beers, sausages and other like fare, and a quieter environment than the original Bullpen (which will be remaining open for this season as well). The name of the new spot? Das Bullpen. (Yes, that's the moniker I flippantly gave the project back when the news first broke, which the owners decided to go ahead and use. #winning!)
Capitol Quarter: If you park in lot T on 3rd Street, SE, you'll see new townhouses going up directly across the street as part of Capitol Quarter's second phase of construction.
200 I: Just to the north of lot T and right by the Southeast Freeway, you'll see the old Star/Post Plant at 225 Virginia Avenue in the process of losing its exterior "skin" as it moves toward becoming 200 I Street, a DC government office building that will be completed next spring.

Canal Park: Right in the middle of things, across from the Five Guys and Subway, you'll see construction at last underway on Canal Park, the stretch of 2nd between I and M that at one time was a schoolbus parking lot and which has been plain open space for the past two years. The park is expected to be open by spring of next year, and so during the next 12 months expect there to be almost no parking along 2nd; the eastern part of the street is closed altogether. Also, note that L Street is closed for this one block, so you can't use it to get from New Jersey to 3rd or vice versa.
Harry's: If your path to and from the ballpark includes a walk down New Jersey Avenue (perhaps from the Capitol South Metro station), and you find yourself in desperate need of adult beverages, Harry's Reserve has now opened on the southwest corner of New Jersey and I, in the ground floor of the 909 New Jersey apartment building.
Florida Rock: While it hasn't happened yet, plans are for the concrete plant just south of the ballpark to be razed sometime this year, bringing unobstructed views of the Anacostia River to the southeastern viewing platform and clearing the Florida Rock site until the proposed 1.1-million-square-foot RiverFront project can get some financing and get started.

Getting Here: I've got my Stadium Parking map ready to go for 2011, though I've made no additions or deletions on it yet for the new season. I'll wander around this weekend and see if any new lots have popped up or old ones have gone away, though first impressions are that there are no major changes, certainly not in terms of the official Nats lots. (If you see any new lots or old ones that have gone offline, let me know so I can update the map.)
But with this area being a multimodal paradise, your better bet is Metro, or the Circulator that runs from Union Station and Eastern Market, or even Capital Bikeshare, now that there's a station at 1st and N. UPDATE: Forgot to mention the water taxi running from Alexandria, and it's possible that the new American Water Taxi service may get started up soon.
Retail? Eats? Unfortunately, if you were expecting this post to include a litany of new food and retail offerings, you will be just as disappointed as the residents and officeworkers currently are with the continuing lack of options beyond Subway, Five Guys, Justin's Cafe, and Cornercopia. There could be at least two additions before the end of the season, however: another beer garden (separate from Das Bullpen) is under development at 8th and L, SE, and the old "Little Red Building" site at 2nd and L is on its way to becoming "Lot 38 Espresso." Neither project has an announced opening date.
There is also lots of under-the-radar chatter of various restaurateurs starting to look at the area (which I haven't bothered posting, because a) I don't do rumors and b) it shouldn't really be news that they're looking in such an underserved area). With the above projects underway, along with DDOT and the FAA soon moving into 55 M, 20 M now 97 percent leased, and 100 M off the DL thanks to its foreclosure sale, there is a definite shift in the economic winds, and it would not be surprising to get some announcement of some new retail before the end of this season.
For more information on what's changed and what might be changing, check out my 2011 State of the Hood. The BID also did a recent roundup of changes.
If you want to relive the glory days of the ballpark's construction, you can wander through all my exterior and interior photos from that heady time, along with my many photo galleries from ballpark-related events over the years, from the groundbreaking to the topping out to each Opening Day. You can also check out what that part of the neighborhood looked like before the stadium's arrival. (Yes, I'm wallowing in nostalgia. It was a fun time.)
(UPDATED headline, because I can't count.)