peek >> << back
Near Southeast DC Past News Items: 100k
Advertise on JDLand 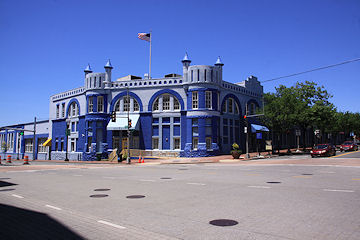 * CHURCH OF THE BLUE CASTLE: It's been four years since the National Community Church purchased the Navy Yard Car Barn, aka the "Blue Castle," at 8th and M, and with all tenant leases now expired, an interior building permit application has been filed for creating a "worship space" for the church, along with support spaces "such as green rooms, production studio, and a kids room." Back in September, Capitol Hill Corner reported that these Phase I plans are for a 900-plus seat auditorium "which will be used for Sunday church services but will be available for rent to the community during days and nights." And, to answer the inevitable question, when I interviewed Mark Batterson about the purchase of the building, he said that he hopes "that someday the Blue Castle will just be the Castle." 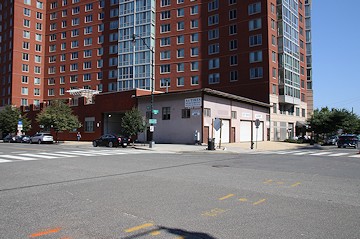 * CHURCH OF THE A-1 TIRES: While developers have been trying to pitch a sliver of a residential building on the northeast corner of 1st and K since the lot changed hands in 2017, the only current movement at the site is an apparent plan to renovate the former A-1 Tires garage for a church assembly space, including a new roof and windows. Is perhaps the Waterfront Church looking to move from their Capitol Hill Tower space? We Shall See. UPDATE: I've been told that this is an expansion by the Waterfront Church, not a move.
* HARNESSING THE SUN MONSTER: If you've seen some construction activities on top of the Nats Park garages along N Street, it is the installation of "solar canopies" containing 4080 modules. (The only question remaining is, will the Sun Monster's number one victim be back this season to see these new additions?)

* WALLS COME TUMBLIN' DOWN?: After the Lerner Companies initially received approval to take the roof off of the old warehouse at 49 L but keep the lower 4 feet of brick walls, there is now a request to revise that permit to remove the wall completely "due to failing structural integrity," and to replace it with a new 8-foot chain link fence. There have been no development plans announced for this site, but one wonders if the Lerners might be thinking about some temporary parking options if indeed their 1000 South Capitol residential building is soon to get underway, which would necessitate the closure/move of Nats Parking Lot K.
Jul 28, 2017 10:39 AM
Friday Tidbits: 1st and K Sliver, Yards Park Kiosks, 49 L for Sale 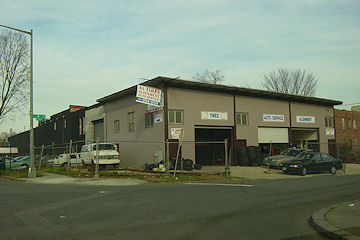 Some brief items while I continue to be more or less on sabbatical:
* 1ST AND K SLIVER? Urban Turf reports that the owner of garage on the northeast corner of 1st and K has finally sold his lot, and a developer is planning a 12-story 34-unit residential building. Urban Turf has a rendering, but I prefer looking back to December 2004, right after the garage building was rehabbed and opened as A1 Tires. JPI attempted to buy the site back when planning 909 New Jersey, but the owner was, shall we say, not interested. (The expletives still ring in my ear from when I asked him about it a decade ago.)
* YARDS PARK KIOSKS: With the return finally of the approved building permits feed, I was able to report in the comments a few days ago that the construction visible in the kiosks along the boardwalk at the Yards Park were for ventures from the owners of Lumber Shed tenants Due South and Osteria Morini (along with what I believe is office space for the marina). I posted last year about the possibility of "Due South Dockside," but Eater has now reported that the Morini kiosk is not going to be the long-ago announced pizza joint Nicoletta, but a "summer sister spot" for Morini that could open late this summer. "Details about the offshoot are limited, but expect a bar serving draft beer and wine, as well as a pared-down menu of what’s available at the flagship restaurant. That includes made-to-order salads, the New York-transplant’s iconic meatballs, and simple desserts," Eater says.

* FED WAREHOUSE: Another twist in the long-running saga of the warehouse at 49 L Street: There is now a sign up announcing that the site is up for sale, and a commenter found the GSA listing.There was talk a few years back of this building being traded to the city, but that apparently is not coming to pass. (Nor apparently did the city choose it as the site of a homeless shelter.) And once upon a time a group of residents wanted it to become the Half Street Market.
* ROSE PT: The BID Newsletter reports that Rose Physical Therapy Group is now open in the ground floor of 1015 Half Street.
* ROOFING: The first "roof cap" on the rebuilt original Virginia Avenue Tunnel was pored last week, in the 200 block of Virginia Avenue. It seems odd to say these words, but the project is expected to be completed next year. (Time flies.)
* YOU'RE AN ALL STAR: The preparations and publicity for the 2018 MLB All-Star Game at Nats Park are now underway, with the unveiling of the logo and also information on how one might actually procure tickets.