Multiple anonymous sources are allowing CityBiz Real Estate to report: "Corporate Office Properties Trust is awaiting lender approval on a $120 million acquisition of Maritime Plaza, a 12-acre site located at the East End of the Washington, D.C. Naval Yard, multiple sources tell citybiz real estate." This follows a story earlier today saying that COPT was close to purchasing an unnamed site, described only as being a fully leased location occupied primarily by defense contractors.
If this goes through, it would be the third time the site has changed hands since construction on the second office building was completed in 2003, with Bernstein Cos. selling it for $92 million in 2004, and then Brickman Associates reportedly paying $115 million in October of 2005. The site, which has two completed office buildings, has included plans for two additional 175,000-square-foot office buildings and a 250-room hotel; leasing is handled by Lincoln Property Company. The land beneath the buildings and plans, however, continues to be owned by Washington Gas, as it has been since pretty much the dawn of time.
Aug 2, 2010 11:23 AM
A Few Upcoming Events, and a Few New Photos
This week's calendar of events:
* Tuesday at 5 pm is PSA 105's "ice cream social and dog treat event" to celebrate America's Night Out Against Crime. It will be held across the street from the MPD 1-D substation at 5th and E, SE, in Marion Park. (Also, for your long-range calendar, note that the PSA's annual dog show will be on Sept. 25 at 10 am, also at Marion Park.) If you're just tuning in, PSAs are the Metropolitan Police Department's Police Service Areas.
* Also on Tuesday, at 6:30 pm, is the second Capitol Riverfront Heritage Trail Meeting, a joint project between Cultural Tourism DC and the Capitol Riverfront BID to create a Neighborhood Heritage Trail for the area. It's at Capper Seniors #1, 900 Fifth Street, SE. (Here's the flyer for the first meeting.)
* Thursday's outdoor movie, weather permitting, is Rocky. It starts at 8:45 pm at Canal Park. 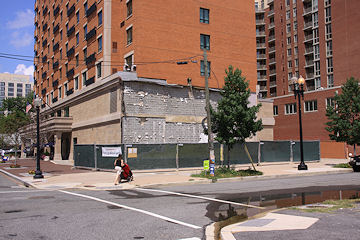 And, I took a long-delayed photo trek around the neighborhood on Sunday (though remind me to never do it again on a game day--too many cars and buses getting in the way!). They aren't really terribly exciting pictures, and the clouds were uncooperative at times, but I did get updated images of the progress at 1015 Half Street, and of the final block (east and west sides) of Capitol Quarter's first phase. And I documented the now-empty space where the Little Red Building used to be. You can also browse the entire batch of the days' photos, and click on the

icon to see all photos for a given location.