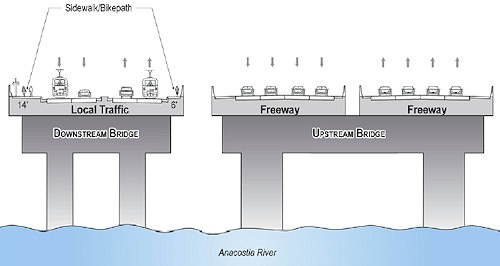 Dr. Gridlock reports
that this morning the mayor held a press conference to (officially?) announce that the city will be rebuilding the 11th Street Bridges, with "in-water" work beginning in August. My project page gives the basics on what will be happening (along with links to the EIS), if you haven't been following along, but here's the high-speed recap: still two spans, but the upriver one would be expanded to become an eight-lane freeway span that would add the missing connection ramps between I-395 and I-295, while the downriver span would be four-lane "local" span tieing together Anacostia and Near Southeast, with pedestrian and bike paths and would be prepped for eventual streetcar usage. The project is expected to be completed in 2013.
UPDATE: The press release from DDOT has just come out, and apparently the real announcement of the day was the awarding of the design/build contract for the project to Skanska/Facchina.
UPDATE II: Additional pieces, from WTOP and from the Examiner, which talks about the lawsuit filed in February by the Capitol Hill Restoration Society to stop the project.
Apr 24, 2009 8:57 AM
City May Occupy 225 Virginia; Ferry Testing; More
Catching up from a few days of slacking:
* Today's Washington Business Journal (subscribers only) reports that the city is "considering" using 225 Virginia Ave. (the old Post Plant) as the new home for Child and Family Services, now that they've decided not to move the agency to a new development at Benning Station. The city continues to pay $6 million a year in rent on the 420,000-sq-ft building, though tried a request for proposals last year to see about a sublease or sale of the property (but apparently didn't get much interest). I wonder how much the city would have to spend the rejigger the very warehouse-y building into the 180,000 sq ft of office space needed by CFSA.
* From the Fredericksburg Free-Lance Star, a story that Prince William County is spending $225,000 to look at passenger ferry service up the Potomac: "It will conduct test boat runs on May 4, 5 and 6 from stops at Prince William marinas at Quantico, Dumfries and Occoquan to Fort Belvoir, Alexandria and the Washington Navy Yard. The test boat will be a catamaran that seats 149." (I assume they'd want to use the dock under construction at Diamond Teague Park, but there's no specifics.)
* On Wednesday evening, the Post reported (though the article is no longer on the web site) that the city had informed Metro--in the middle of a game!--that it would no longer pay the $27,000-an-hour cost of keeping the subway open if games at Nationals Park ran late because of extra innings or rain delays. By the next morning, the city had changed its mind.
* The Douglass Bridge will be closed Sunday (4/26) from 5am to approximately 10am for the monthly swing span test.