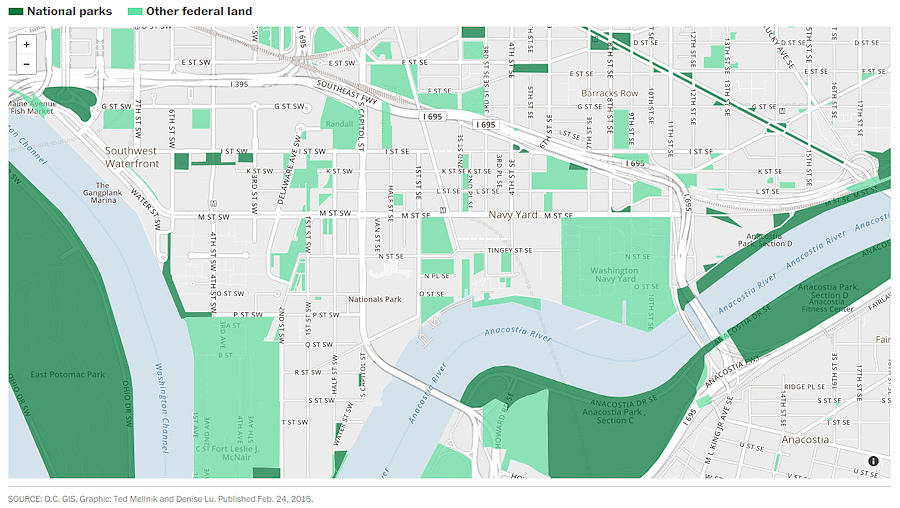 With possession and cultivation of small amounts of marijuana becoming legal in DC on Thursday, the Washington Post helpfully mapped out all of the federally owned tracts of land in the city, since pot possession will still most decidedly not be legal on federal land.
So, in the interest of providing pertinent information to my readers, I zoomed the map in to show these locations in and around Near Southeast, of which there are many. The Navy Yard is one such spot, obviously (see how that "The" comes in handy?), but so is Canal Park, Virginia Avenue Park, the Marine Bachelor Enlisted Quarters, DC Water's land, various lots around the Yards including parts of the Yards Park, and the government warehouse at Half and L. Not to mention all of the shoreline east of 11th Street, plus Garfield Park, Randall Recreation Center, and a whole host of other public spaces nearby.
While the map shows you where possession will be illegal, it's not like the new law is allowing public consumption, federal land or not: "D.C. police will be instructed to continue ticketing for public smoking of marijuana, a ticket akin to drinking in public, punishable by up to 60 days in jail and a $500 fine."
In fact, it's probably best to read this other Post story, along with the FAQ and fact sheet released by the city--to find out exactly what is and isn't legal. But here's the basics:
As of Thursday, any individual 21 or over can:
* Possess two ounces or less of marijuana;
* Use marijuana on private property;
* Transfer one ounce or less of marijuana to another person, as long as: (1) no money, goods or services are exchanged; and (2) the recipient is 21 years of age or older;
* Cultivate within his or her primary residence up to six marijuana plants, no more than three of which are mature.
However, it will still be illegal to:
* Possess more than two ounces of marijuana;
* Smoke or otherwise consume marijuana on public space or anywhere to which the public is invited; including restaurants, bars, and coffee shops;
* Sell any amount of marijuana to another person; or
* Operate a vehicle or boat under the influence of marijuana.
UPDATE: The mayor's FAQ notes that it will remain illegal to smoke in public housing residences.
Feb 24, 2015 1:02 PM
Capper 'Flexibility' Gets Initial Okay from Zoning Commission 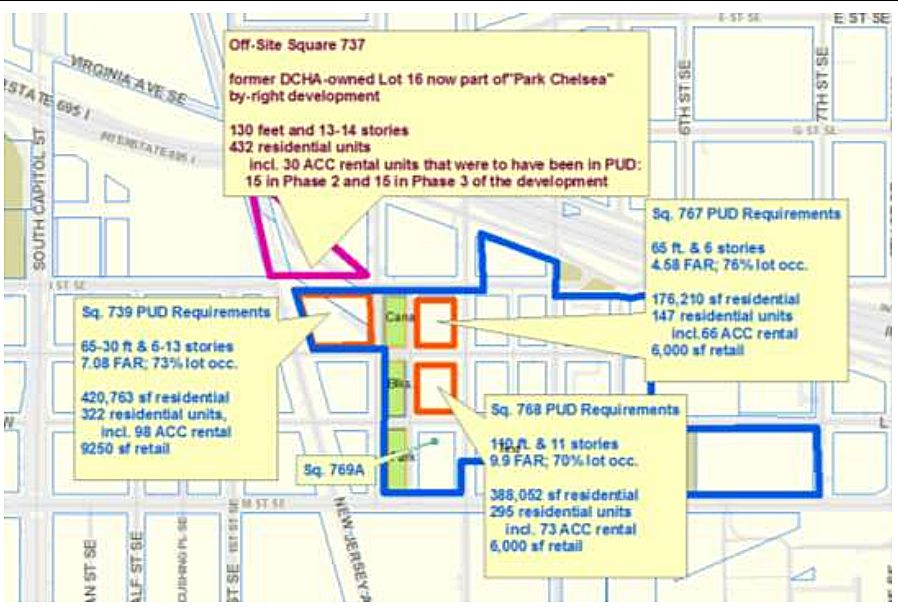 With unanimous agreement that the need to get former public housing residents back to the neighborhood is paramount, the Zoning Commission on Monday gave first approvals to the DC Housing Authority's request for flexibility in how it allocates 206 affordable units still to be built within the Capper/Carrollsburg PUD boundaries, while still being required to have no fewer than 15 percent and no more than 50 percent of the units on any square be affordable.
ANC 6D remains adamantly opposed to the flexibility idea--or at least to the idea that this flexibility would then allow a possible all-affordable building next to a market-rate condo building on Square 767--saying it "would circumvent the theme of HOPE VI revitalization and the goal of the PUD."
But Zoning Commission vice-chair Marcie Cohen disagreed, saying that the success of Capper's revitalization is that "the area is mixed income, the neighborhood is mixed income," and that she doesn't have a problem "when public housing is a single project within a mixed-income neighborhood." Noting that some of Capper's previous residents were relocated from the site now more than 10 years ago, Cohen said that "the people who have been displaced have a right to come back"--and given that "financing vehicles are now driving housing policy," meaning that getting affordable housing units financed has become so difficult--the Housing Authority has in her view come up with a plan that is "satisfactory," and should be able to go ahead and "secure the proper financing, build the project, and get some of the people back if they choose."
Her fellow commissioners concurred, with both Robert Miller and Michael Turnbull also noting that all projects on the three remaining residential squares at Capper will need to come to the Zoning Commission for review before moving forward.
And in its response to the ANC 6D letter, the Housing Authority emphasized this point, saying that the concerns raised by 6D will be addressed at that time, and that the reviews "will also demonstrate that the design of the buildings and distribution of the units in those applications are consistent with the PUD's overall goal of providing a vibrant, mixed-use and mixed-income community."
This case also will allow 30 of the Capper affordable units to be relocated to Square 737, to be included in both the 800 New Jersey/Whole Foods building and the eventual third-phase residential building on the eastern portion of that block.
My previous post on this zoning case gives plenty of additional detail if you desire.
Feb 24, 2015 11:57 AM
Zoning Approval for Residential Project at 1333 M 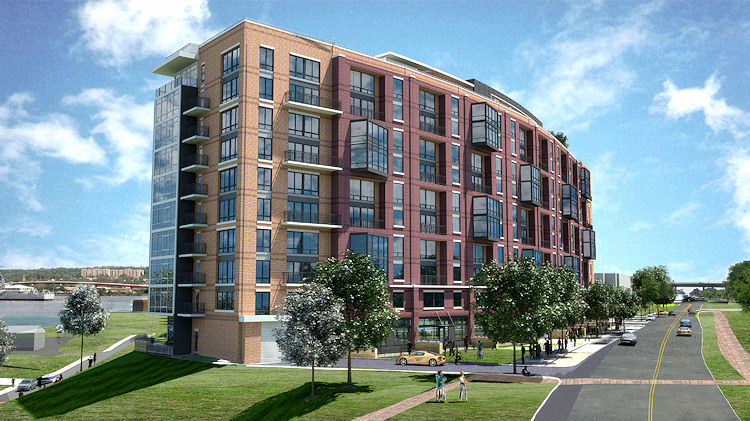 On Monday night the Zoning Commission gave final approval to first-stage plans for the Cohen Companies' 1333 M Street residential project, along with second-stage approvals for the development's first phase, a 10-story 218-unit building.
The final approvals had been slowed by a number of items that concerned the commissioners. Among them:
* While a memorandum of understanding detailing benefits and amenities of the project had been worked out earlier in the process between the developer and ANC 6B, neighbors that live along L Street SE north of the project continue to have objections to various aspects of the project, such as there only being 220 parking spaces for a 673-unit development, as well as the impact of the standard hours of construction on their "quality of life," which Chairman Anthony Hood keyed on as an item where there could have been some "negotiating," though commissioner Peter May noted that the building is not particularly close to L Street SE (with the new Southeast Blvd. and the CSX train tracks separating the two).
* The lighting plan for the building, which had originally been shown with a fair amount of up-lighting but is now all down-lighting after the commissioners objected. 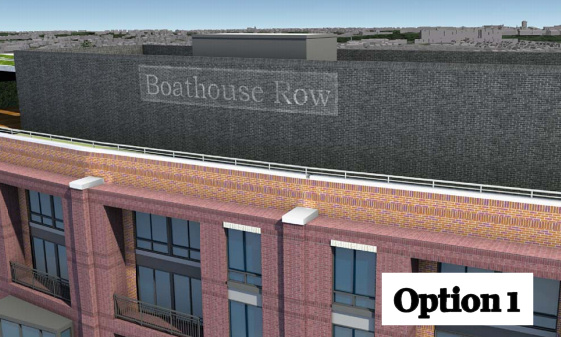 * The plan for a "place-making sign" on the building's penthouse had gotten Peter May up in arms at the Proposed Action stage, and so the developer came back with additional options. (If you click to enlarge the rendering at the top of this post, you can see up at the roofline a smidge of the BROOKLAND-like sign facing north.)
May and the other commissioners still sighed a bit over there being a sign up there at all, but did agree that Option 1 is a "more subtle" version that is an "improvement." I have a notion that some readers might disagree: 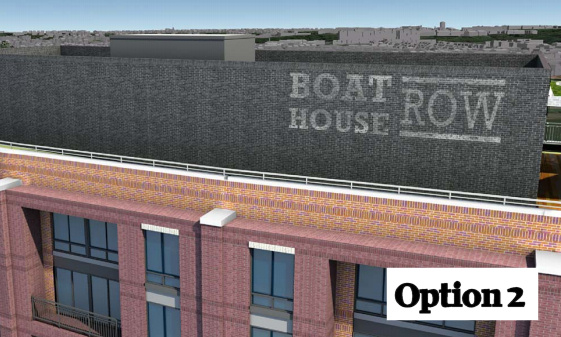 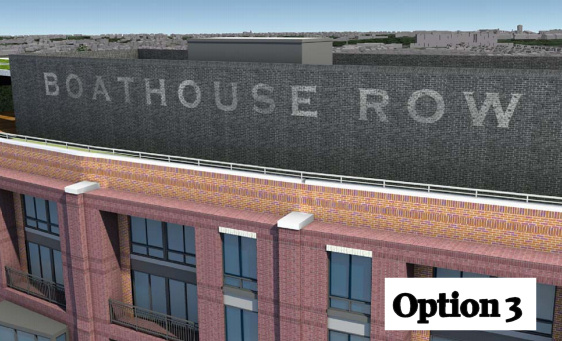 In the end, though, there were no showstoppers, and the commission voted 5-0 to approve both the first-stage PUD for the overall project and the second-stage PUD for the first residential building.
My 1333 M project page has additional renderings and information--and if you are new to the story and can't quite visualize where 1333 M even is, it's on the part of M Street that proceeds eastward underneath and past the 11th Street Bridges. 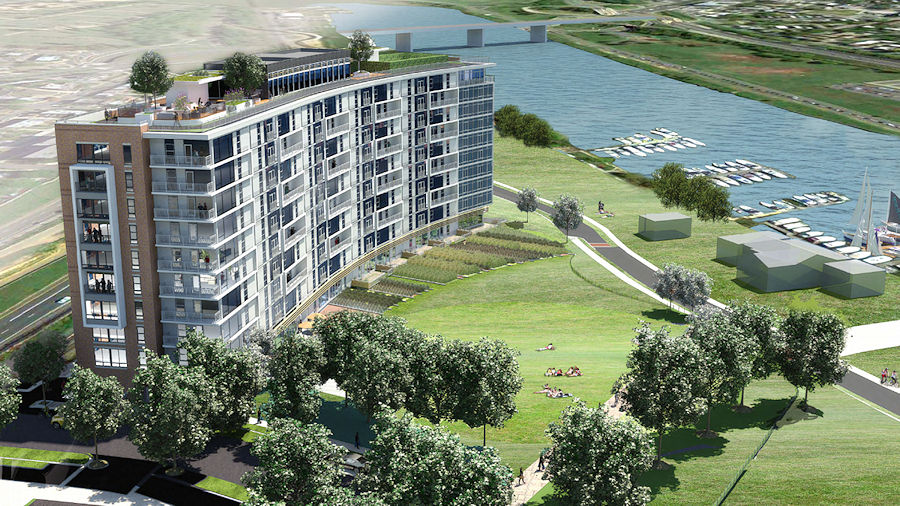 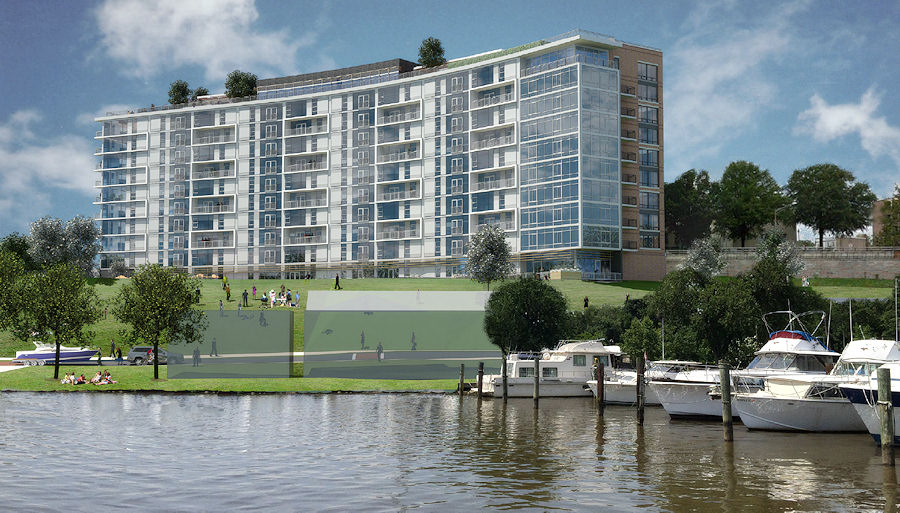 UPDATE: Forgot to include that the project made it past the National Capital Planning Commission as well.