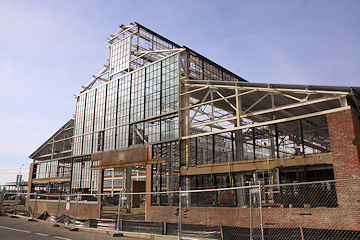 There hasn't been much said so far about the restaurant planned for the Boilermaker Shops at the Yards by the Birch and Barley/Churchkey team, but the Post's All We Can Eat blog posted some morsels today:
* The still unnamed venture will "contain a full-scale production brewery, a brewpub-like tasting room [...] and a 200-plus-seat restaurant."
* A head brewer has been hired: Megan Parisi, former lead brewer at the Cambridge Brewing Company in Massachusetts. And, as a fun side fact, Parisi used to play clarinet for the US Navy Band, right next door at the Navy Yard.
* "Barrel-aged sour beers" will be a major focus. A comparison is made to Belgium's lambic beers, which means I'll be camping on the doorstep (Lindeman's Peche is a personal favorite). Owner Greg Engert called it all "a giant experiment."
* The operation will "open in about a year."
The brewery's neighbors in the building at 4th and Tingey SE, as announced so far, will be an Austin Grill Express, brb ("Be Right Burger"), Buzz Bakery, Huey's 24-7 Diner, and Willie's Brue and 'Que sportsbar, which will be another option for drowning any Prince Fielder-related sorrows, though by the time these places open the Nats will have had a fabulous 2012 season and no one will remember any of the recent drama. Right? Right?
Jan 24, 2012 3:55 PM
Bikeshare Data Goofing Around: Mapping Bike W01000's Trips 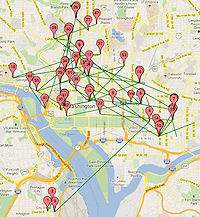 This is little more than an off-topic I-want-to-try-it exercise, but after reading JD Antos's latest crunching of the Capital Bikeshare trip data that came out last week, I decided to see what it would be like to map the movements of a particular bike.
I picked bike W01000, for no reason other than I saw it while I was browsing through the tables and thought it looked like a nice round number--I make no statements as to how representative it is of other bikes, except that it was in the system for all of 2011, except for a few brief periods when it either didn't hit the rider lottery or was out for maintenance. (And I ignored trips less than a minute long.)
So, want to know where Bike W01000 went on December 1, 2011? Or July 4? Or my birthday? Or any day of your choosing? Take a look and see. Of course, the green lines for "trips" are just as-the-crow flies, and are not the actual routes taken by riders (since the bikes don't have GPS transponders THAT WE KNOW OF!!!).
There's also a table below the map that shows the trips broken out in order for that day, which is handy on days with a number of trips where sometimes the push pins on the map get piled up on each other. Also, note that some trip lines end without a push pin--that's because the pins mark the start of trips, and so if a bike got re-balanced to another station, that ride's endpoint will be pin-less.
You can also browse by month, but it's pretty spaghetti like.
This is quick-and-dirty, so there are probably bugs.
Jan 24, 2012 9:52 AM
Tuesday Lack-of-Tidbits Post: Yards Park Kudos, 200 I Progress
I guess I'm not unhappy that there's not much to pass along right now, given the firehose of content sprayed from these parts last week. So, while we all wait to find out whether Prince Fielder is going to be a new neighbor, here's the best I can come up with:
* The Atlantic Cities writes a paean to the Yards and the Yards Park, noting that Washington "is finally getting a green waterfront to be proud of," after years and years of poor waterfront access throughout the city for residents.
UPDATE: I'll toss this in, since I'm short on content: a writer at the Hill is Home is bummed that the Lumber Shed is going to be enclosed for retail space (and Forest City's offices upstairs), and is taking a poll to find out who does or doesn't agree.
* Exterior work continues to wrap up at 225 Virginia/200 I, with the new parking deck at 3rd and I mostly completed. Visitors to the building will park on the deck's upper level, via an entrance on 3rd just south of Virginia, while staff will enter the deck's lower level on I Street; there is also employee parking in the building's basement. I imagine traffic on 3rd is going to get even more interesting when the building opens to three city agencies later this year.