I almost can't bring myself to write the words, but the owners of the Florida Rock site just south of Nationals Park have filed with the Zoning Commission for not only the previously reported plan to change the planned first phase office building to a residential one, but also to revisit parts of the site plan for the three subsequent phases. (For those of you versed in zoning speak, they are requesting to "revert Phases II, III, and IV to First Stage Approvals with modifications.")
This is going to be a lengthy process, with hearings at the Zoning Commission, reports from the Office of Planning and others, and presentations to the ANC (starting with one this coming Monday night, Dec. 12). So I'm going to avoid getting into the weeds too much too early, and will just give some bullet points of what changes they are looking for. (You're free to read these 57 pages of the filing for more detail.)
* The new Phase 1 building, at the far east end of the site (next to Diamond Teague Park) will now be the aforementioned residential building, a nine-story U-shaped design oriented toward the river with 300-350 units and 286 below-grade parking spaces. There will still be 12,500 square feet of retail, though they are asking that 7,000 of it be "flex space" that "may alternatively be dedicated to residential amenity space" until retail gets going. There will be a private courtyard within the "U", but there will also be the open space on the buildings' east side, now dubbed Anacostia Plaza, that will be open enough to maintain open views from First Street and the stadium's Grand Staircase to the river but will also provide "passive recreation space." 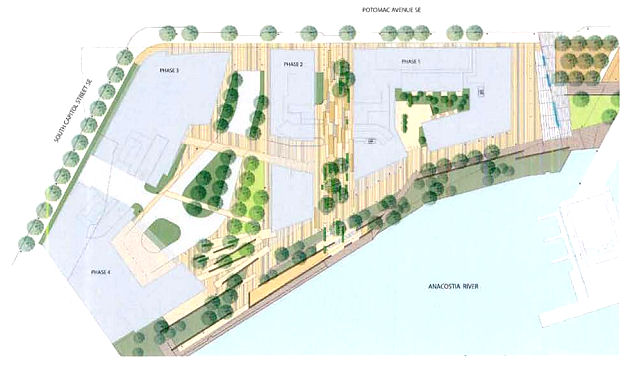 * The esplanade that has always been such a big part of the site plan remains, acting as the portion of the Anacostia Riverwalk Trail connecting South Capitol Street to Teague Park, the new pedestrian bridge, and the Yards Park. The Esplanade will "relate" to the "design vernacular" of the newly constructed boardwalks, and will also have a lot of stormwater management and bio-filtration offerings.
* On the building's west side will be the "Mews," which they call a pedestrian boulevard separating the Phase 1 building from the planned Phase 2 residential building. This path will also provide access to parking and loading for the first two phases, but "a dynamic paving design . . . will help distinguish this area as an urban space that privileges pedestrians over vehicles."
* The filing says they anticipate construction to begin in the second quarter of 2013, with first move-ins in early 2015 and the entire phase completed by summer 2015.
As for overall changes, here's what seem to be the most interesting changes from the previously approved design that the developers are looking for:
* The new plan would bring 1,164,640 square feet of gross floor area (4.6 FAR), up from 1,115,400 sq ft/4.4 FAR in the last plan. The other three phases' uses would remain unchanged (residential, office, hotel).
* Building heights of 130 feet for Phase 2-4 are being requested, compared to 130/112/130 last time around.
* Below-grade parking spaces would go from 1,010 to 1,144.
Plus, though It's hard to tell from one small site plan concept drawing, a lot of the public space design, especially to the east of the Phase 3 and 4 buildings, looks scaled back from the 2008 design. (UPDATE: Here's a graphic put together from another part of the filing that compares the 2008 site plan with the current one.)
The filing also says that "the Applicant would like the flexibility to provide interim uses on Phases, II, III, IV so that the site will not simply lay dormant pending construction," and lists a park, a farmers market, or other "simple, temporary retail uses" as examples.
And, just as in the previous plans, development of phases 3 and 4 are completely dependent on the construction of a new South Capitol Street Bridge, since the current bridge bisects the property where those buildings are planned.
Again, this is early in this new process, and there will be plenty of filings and presentations to come for all the additional detail you're going to be clamoring for. For now, the takeaway is that FRP/MRP want to get started on a residential building at 1st and Potomac in the spring of 2013, and still want to move forward on the rest of the site with a design similar to what was approved 3 1/2 years ago, but with some modifications.
This project first began its zoning quest in 1998, and went through a four-year process ending in 2008 to get its second-stage approvals. I should also note that Davis Buckley Architects, who worked on the project throughout that 10-year ordeal, is no longer part of the design team; SK&I is now on board, with Oculus as the landscape design firm. The site's owners, FRP Development/Florida Rock Properties, announced their partnership with MRP Realty earlier this year.
(As for the concrete plant currently on site, I haven't looked lately, but demolition is underway, and the filing says it should be done by the end of the year. Tom Boswell's heart will be broken.)
UPDATE, 1/3: Just before Christmas, demolition was finished on the plant, making it #166 in my Demolished Buildings Gallery.