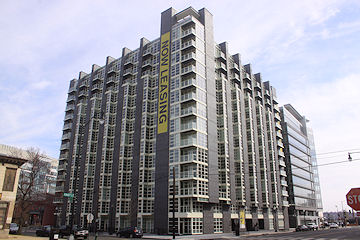 Hot on the heels of the sales (completed and pending) of JPI's three "Capitol Yards" buildings, there's another notice in another lobby that a neighborhood apartment building is under contract to be sold. This time it's Onyx on First, the 266-unit apartment building on the southeast corner of 1st and L, which was developed by Faison with an assist from Canyon-Johnson Urban Fund and opened in late 2008.
The sale price is listed on the form as $82.25 million, with the buyer being ERP Operating Limited Partnership, which is the operating partnership of Equity Residential, owner of a slew of DC-area buildings including 425 Mass and 2400 M, as well as a huge slate of properties around the country. (As an aside, the company was started by Sam Zell, a name that certainly has resonance for folks in the newspaper biz.)
Onyx went on the market more than a year ago, but that initial offering didn't result in a buyer so it was re-offered later last year. The notice to tenants specified that there are only 11 units currently unoccupied.
As we all learned during the JPI sales, it's required by DC law that residential buildings of more than five units under contract to be sold be offered to residents to purchase. (Insert here my standard joke about looking in the sofa cushions for $82 million in spare change.)
JPI's Axiom and 909 buildings were sold for around $95 million each, with the the Jefferson's contract price/purchase price for tenants listed at about $165 million.
Onyx's next-door neighbor, the office building 100 M, was put up for sale in March. (Which is apparently just now news to WBJ, though I had heard rumors that it had been taken off the market after that original offering, so maybe this is a new push.)