2 Blog Posts
Apr 6, 2010 8:32 PM
Justin's Cafe Gets Liquor License; April 16 Opening
I've just received the news from Justin Ross that he got his liquor license today, and that Justin's Cafe is on target for an April 16 opening. (Yes, I know I was skeptical of that date a while back, but now that I've heard it from the guy who's name is on the sign....)
If you haven't been following along, Justin's will be a restaurant with full bar serving pizzas, sandwiches, and salads, open seven days a week with regular "bar hours," just a few blocks up First Street from Nationals Park. Here's an electronic version of the menu.
We'll have to do a JDLand get-together there in late April.
Apr 6, 2010 12:11 PM
New Boat Cruise Company Operating from Teague 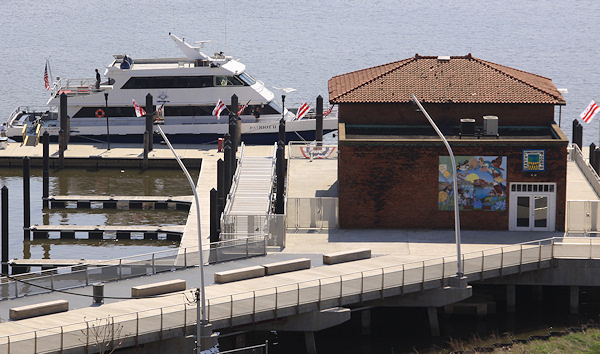 During yesterday's opener, I noticed a boat named the Patriot II docked at Diamond Teague Park, alongside the Potomac Riverboat Company's Miss Christin that runs from Alexandria for baseball games. A little research has uncovered that the Patriot II belongs to DC Harbor Cruises, which on April 1 began running sightseeing boat trips and private charters out of Teague. They are operating "Cherry Blossom Harbor Cruises" through April 11, as well as trips before and after Nationals' games and apparently plans for all sorts of specialty cruise options.
For some additional detail, you can see this report from last Friday by Fox5's Holly Morris on the company (and the BID and the Earth Conservation Corps). No prices are listed anywhere on the site yet, but you can call for reservations and apparently tickets can also be purchased at the dock as well as at Union Station and eventually online.