1 Blog Posts
Feb 14, 2014 12:16 PM
Zoning News: Yes to Vet, and Capper Hearing to Come
Now that I've come out of my snow bunker (being a weather geek is a terrible disease), I'll pass along these notes from the past week or so in Zoning Land:
* VET: The commission on Feb. 6 approved 5-0-0 Forest City's request for a wording change to allow a veterinary hospital to operate in the Southeast Federal Center Overlay area (basically, the Yards).
As I wrote a week or so ago, a vet is a potential tenant in Twelve12's retail space on Tingey Street, but before a lease can be signed, "veterinary boarding hospital and veterinary hospital uses" needed to be added to the SFC overlay's allowed uses, subject to a number of conditions (no more than 50 percent of the tenant space can be for boarding, that any animal legally sold in the District can be boarded, incidental boarding of animals for convalesence is allowed, order and waste handling requirements, and that grooming and supplies can only be "accessory" uses). There was some back-and-forth about the word "incidental," and it was agreed that that wording be better phrased before the final vote.
Forest City does not announce tenants until a lease is executed, so the name of the potential vet has not been released. 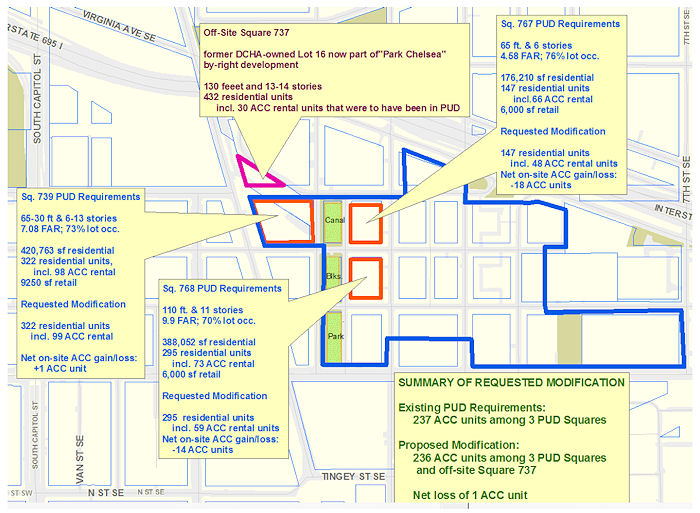 * CAPPER: On Feb. 10, the commission voted to "set down" for a full hearing the Housing Authority's request to modify the Capper PUD to allow 30 of the affordable housing units planned for squares 739, 767 and 768 to be transferred outside the Capper boundaries to the block where the Park Chelsea is currently under construction. (See the this map culled from the Office of Planning Report to help you visualize.)
The planning folks have a number of issues they want DCHA to address before the hearing on this modification, but not among them is the biggest issue that ANC 6D has with Square 767: that the Housing Authority is thinking about a plan that would change the original plans for a single 147-unit mixed-income building to two buildings, one a market rate-only condo building and the other an affordable housing-only building. (This plan is not mentioned in the housing authority's filings with the zoning commission.)
During the discussion, commission chair Anthony Hood noted that ANC 6D is "one of the ANCs that this commission knows is very engaged," which was in reference to the strongly worded letter the commission received with 6D's concerns that they and the community still need to be "appropriately briefed" about DCHA's plans, and that the commission be able to "fully vet our concerns with them regarding the request for modification." Hood also said, "Let's make sure the next vote we see shows that everyone is working together."
Concurrently, the commission's vote also deferred action on DCHA's parallel request for a five-year extension to the PUD covering these same three squares, saying that the extension request decision hinges on the modification case's decision. The Office of Planning is recommending just a two-year extension, and zoning commissioner Marcie Cohen said that DCHA needs to provide much more detailed information on the steps taken up to this point to secure financing, since it is her opinion that the initial filing doesn't seem show a "compelling need" for an exemption.
The hearing date isn't yet set, and DCHA will have to go to ANC 6D (and probably 6B as well) in order to request support before its zoning commission appearance. The Housing Authority and 6D have had a pretty contentious relationship over the years in regards to the Capper redevelopment, and it's unlikely that the deliberations over this zoning request will change that.