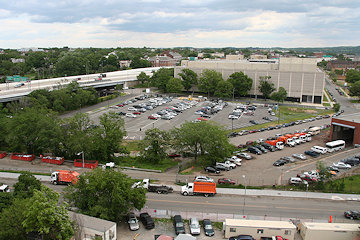 From Tuesday's Washington Post, confirmation at last at what has been reported since 2002, but with a bit of a twist:
"Whole Foods Market and a D.C. real estate firm are interested in building a new store in Southeast Washington near Nationals Park, but the developer says that luring the grocer would require $8 million in tax breaks. William C. Smith and Co. is proposing a 39,000-square-foot Whole Foods for 800 New Jersey Ave. SE as part of a building that would include 375 apartments."
More: "Smith said the $800,000 annual tax break would cover requests by Whole Foods including an additional level of underground parking, extra elevators and higher ceilings on the bottom floor. Without the tax break, he said, he would either wait to develop the site or build a smaller apartment building with little or no retail."
Tax breaks for developments are being requested more frequently during this Era of Economic Difficulties, but the city's own financial troubles, and the amount of assistance that has been going to Ward 6 in comparison to other parts of the city, may make a request like this a tough sell, the article says.
There are already plans to bring a not-officially-named grocery store (*cough*Harris Teeter*cough*) to the neighborhood perhaps in 2013 at 4th and M in the Yards. This Whole Foods site, though, would also be a draw not only for Near Southeast residents but for folks on the south side of Capitol Hill, given its location just on the other side of the Southeast Freeway. You can see some photos of the site here.
WC Smith has been planning a four-building, 1.1-million square foot office/residential/retail project on this block (Square 737) for some time. The transfer of a small plot of land known Reservation 17A was finally completed last year from the Feds to the city, clearing a long-time bureaucratic hurdle to getting the site redeveloped. (This will also allow I Street to be built through between 2nd and New Jersey once the DPW building just to the south is demolished, which may happen this year.)
There has been chatter over the past few months that Smith was pitching the entire site for the 1.1-million-square-foot Department of Homeland Security lease that GSA currently has out for bid--this movement on getting a residential building started might seem to signal a shift from that possibility, along with being another indication that developers are sensing Near Southeast is a strong residential market.
This lot is next to 225 Virginia Avenue, the old Star/Post plant that is hours away from starting its transformation into 200 I Street, which will be home to three city agencies when its "re-skinning" and renovation is completed within the next two years.
(A note: The article says that WC Smith purchased the land from the Post in 2000 for $50 million; I think a decimal point got lost somewhere, because DC Property Records say that the lot, which used to be home to an old warehouse owned by the Washington Star and then the Washington Post, sold for $50,000 in December 1999. That number might not be right either, but considering that even now, in a completely changed neighborhood 11 years later, the 800 New Jersey land is assessed at just over $19 million $58 million, I doubt that Smith paid $50 million. [UPDATED because I looked at only one assessment record instead of three.] The WC Smith parcels were assessed at about $2.5 million in 2001, the oldest records that I have.)
Feb 14, 2011 9:38 PM
ANC 6D Doings: Bullpen Expansion Support, Canal Park Timeline
Quick items from tonight's ANC 6D meeting:
* The commission voted 6-0 to support the Bullpen's plans to open an additional 632-seat beer garden at Half and M, across from the Navy Yard Metro station's west entrance just north of Nationals Park. Owner Bo Blair says that this new area, which I'm referring to as Das Bullpen until cease and desist letters stop me, would be a more "mellow" space than the current Bullpen, with little if any live music, and catering more to folks over 35 and families. It will be offering European beers and a "light" menu (though, are sausages ever really "light"?).
It was determined that this new operation, which will run in tandem with the existing Bullpen at Half and N for the 2011 baseball season, does not need its own liquor license. The ANC in its motion also requested that ABRA handle this license expansion request in an expedited fashion so that negotiations between the Bullpen and landlord Akridge can be completed and the beer garden can be opened by the end of March. It's expected that the original Bullpen will disappear after this season so that Akridge can begin construction on the southern residential portion of its 700,000-square-foot Half Street project.
While both Bullpens will only be open during stadium events, Blair said he's thinking about investigating whether food trucks could be coaxed to come to the Das Bullpen site during lunchtime on non-game days every so often.
You can read more about Das Bullpen here.
* Chris VanArsdale of the Canal Park Development Association gave a very brief presentation by request of 6D chair Ron McBee. VanArsdale said that the "construction kick-off" meeting was held today with Davis Construction, and that work on the site should start "by the end of the month." With a 14-month construction timeline, this would get the park "substantially completed" by March 2012, and finished by May.