peek >> << back
Near Southeast DC Past News Items: census
Advertise on JDLand 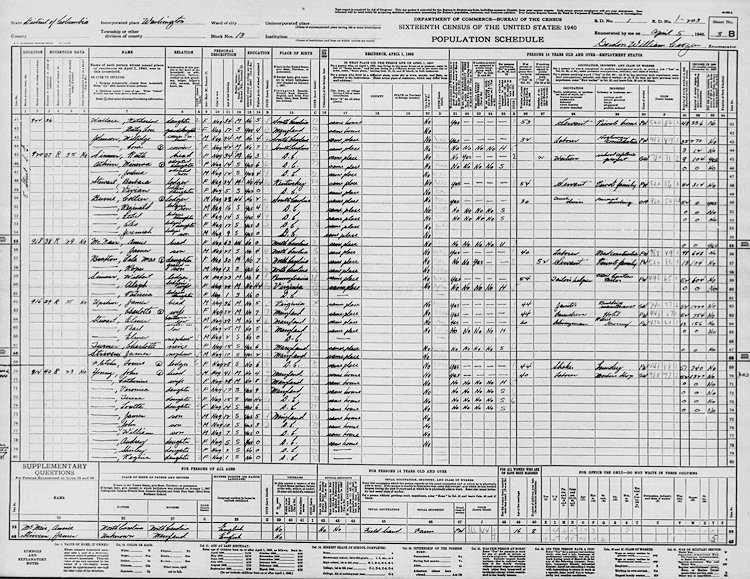 You may or may not be aware that this week the National Archives posted online the 3.8 million pages that made up the 1940 census. They aren't yet searchable by name, but they are browsable by "enumeration district." This means that if you don't mind waiting for huge images to load, you can in essence wander from street to street and find out all manner of information about the people who lived there 72 years ago.
Since I've had a little bit of experience with census digging (I did a lot of my family's geneaology back in the early 2000s, before I began some other project that soon sucked up all my free time), I took a few minutes and found the links to the five enumeration districts that cover Near Southeast, along with the map that shows their locations. 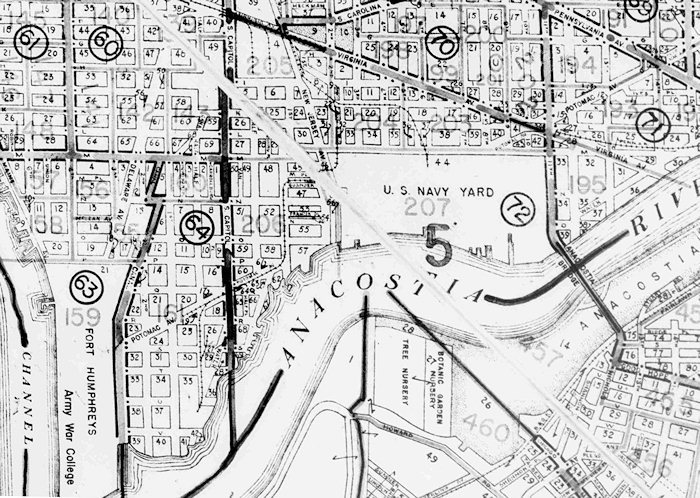 So, if you live in Capitol Quarter, ED 204 covers you (from 2nd to 5th and Virginia to M). ED 203 goes east from 5th to 11th, while ED 205 includes all the blocks between 2nd and South Capitol north of M, for you Velocity/Onyx/CHT/Capitol Yards folks. ED 206 goes from M to the Waterfront and over to what's now the WASA site, while ED 207 covers the Navy Yard, which at that time ran from New Jersey Avenue to 11th. (It's actually funny how those boundaries from 72 years ago do a pretty good job of reflecting how the neighborhood's various sub-areas are still seen today.)
This was more than 10 years before the Cappers were built, but the neighborhood wasn't exactly a rich enclave. Plus, not many houses that were standing in 1940 remain in existence today, so only a few people will get the fun of seeing who actually lived in their house back then. But I thought one or two people might enjoy wandering through the many pages to get a feel for the people who lived in Near Southeast as World War II was looming. (You'll probably want to use the Questions Asked page to guide you across the columns. Note that the street name is written vertically in the first column, with the house number next. And the pages don't always perfectly follow the grid, so you may need to page through much of the ED to find the spot you're looking for. Plus, the image display is really cruddy right now, so using the option to download an entire ED and then browsing with the image viewer on your own computer might be preferable.)
Please post in the comments anything interesting you find--you'll make an old lady historian very happy.
(And I guess I might have to dig up the same information for earlier censuses. Not tonight.)
PS: If you don't live in one of these EDs, you can wander through the city map to find yours.
Jun 29, 2011 1:29 PM
Tidbits: ANC Redistricting, Canal History, Greenspace, 8th St. Deal
After all the big news of late, downshifting into a Tidbits post doesn't really seem like much fun, and of course if you're following me on Twitter or Facebook (or checking out the Twitter box on the JDLand home page every so often), you've already been alerted to many of these. But, onward: 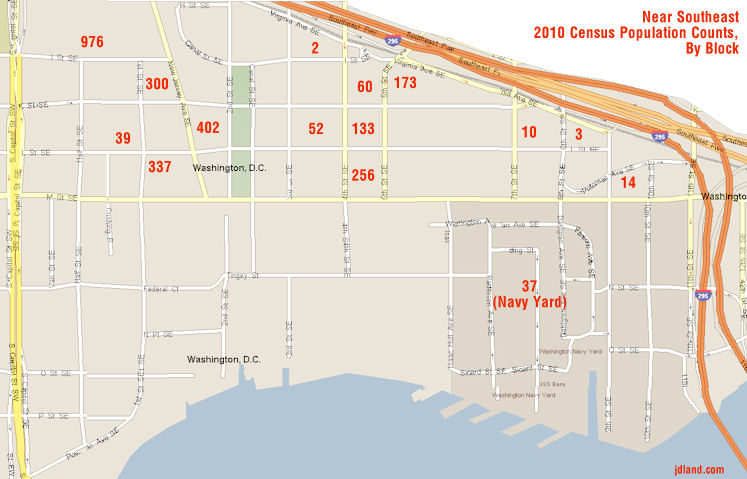 * If you're wondering how the ANC redistricting process will work (especially since the ward version was so much fun!), here's the official memo on the procedures going forward. As in previous years, ANC single member districts will have populations between 1,900 and 2,100 residents. Census Tract 72, which covers all of Near Southeast and so includes all of ANC 6D07 plus the small number of houses from 7th Street east to 11th that are in ANC 6B04, was counted at 2,794 residents in the 2010 census.
The Office of Planning has the census-block-by-census-block numbers, but, ahem, I don't actually know which blocks are which, though if I had to guess by looking at the numbers and how the blocks are organized, I'd say that 6D07 probably came in at 2,743 and south-of-the-freeway 6B04 at 51. Ish. (Perhaps an ANC version of the GGW Redistricting Game isn't far off!) It isn't enough to split 6D07 into two single member districts, but it also can't stay as is. The question will also loom large as to whether new boundaries will split the neighborhood even more between ANC 6B (Capitol Hill) and 6D (Southwest), or move it all into one or the other. UPDATE: Thanks to IMGoph in the comments, I got a look at the map, and it appears the actual residential split is 2,767 to 27. Read my comment for details. I'll make a map at some point.
UPDATE 2: And here's a quick and dirty map, showing block by block what the census folks recorded the neighborhood's residential population at, as of April 1, 2010. As I mention in the comments, the residential buildings west of 2nd Street SE add up to 2,054 residents, perfectly within the numeric requirements for an SMD. But how SMDs will actually be divvied up is anyone's guess right now, beyond the fact that there's no way the vast bulk of Near Southeast will continue to be in just one SMD.
Council members are supposed to appoint their ward task force members by Friday, with progress reports due on Aug. 1 and Sept. 1. The entire process has to be completed by the end of 2011.
* The Hill is Home has posted the first of a two-part look at the history of the Washington Canal, which used to run along where Canal Park is under construction. (Speaking of which, I grabbed a quick cellphone shot from above the park last week showing the work on the southern block, where the foundation for the pavilion is being built.)
* Housing Complex writes about the deal finally being finalized for Greenspace to move into the empty retail spaces in the 1st Street facade of Nationals Park, creating a "12,000-square-foot center for green building and design." This has been in the works for nearly two years, but even though there was a "launch" of the space on Tuesday (which I didn't hear about until people at the event started live-tweeting it), Housing Complex says that the project won't come to fruition until Greenspace "is able to raise another $600,000 in cash and in-kind contributions, adding up to the $2 million necessary to build out what's currently a blank shell." Perhaps someday, when Florida Rock is built out to the south and later Yards phases along 1st Street are completed, the "real" retail envisioned for this portion of the ballpark will come to pass. Here's the press release on the Greenspace project.
* Madison Marquette, owner of the Blue Castle at 770 M St. SE, has now apparently completed a joint venture deal with local landowners ICP Group for all ICP's various properties on the east side of 8th Street south of the freeway, including the gray building at 8th and Potomac that houses Quizno's and the other properties along the 800 block of Potomac, and others. No news as to what might be done on those blocks, though if the new Marine Barracks site search ever crops back up, a group owning all of the land on Squares 929 and 930 could conceivably submit a proposal for a public-private partnership.
Coming later today, an equally bulleted post highlighting the slew of upcoming events in the neighborhood, both for this holiday weekend and beyond.
Mar 24, 2011 9:42 PM
2010 Census Numbers Quantify the Changing Near Southeast
Numbers geeks rejoiced on Thursday when the 2010 census numbers for DC were released, and of course I had to dig right in.
The population of Census Tract 72 in 2010 is given as 2,794, an increase of nearly 1,000 residents from 2000 and which accounts for about 11 percent of the entire Ward 6 population increase. The demographic numbers are striking: Near Southeast is now nearly 60 percent white and 31 percent African American, compared to being nearly 95 percent black 10 years ago. It's also interesting that it found 95 percent of the population to be age 18 or older, compared to only 69 percent in 2000. There's also 1,459 more housing units counted in the neighborhood (and that number has certainly gone up since the census was taken).
Here are the numbers: 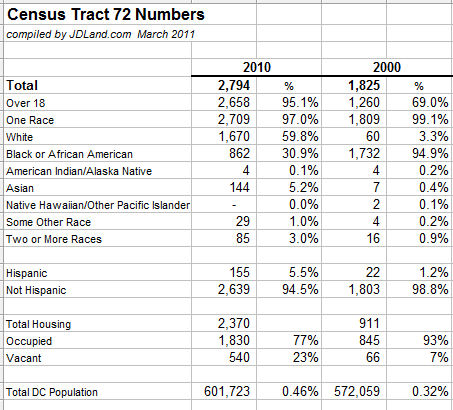 (You can see an expanded list with percentage change and some additional numbers here, which also shows that the neighborhood's population counted at 2,089 residents in 1990 and 2,994 in 1980.)
The Capitol Riverfront BID has estimated that the neighborhood population was around 3,300 at the end of 2010.
Even though the population of DC itself climbed by nearly 30,000 in the last 10 years, Near Southeast is now a larger portion of the overall population than it was 10 years ago, skyrocketing to a whopping .46 percent of the city's count.
"Tract 72" covers the area south of the freeway from South Capitol Street to 11th Street, but unless people are living east of 11th on their boats (or in a van down by the river), the boundaries would cover all of the residential areas of Near Southeast.
Of course, what future researchers looking at census numbers will never see is how much more the neighborhood emptied out through 2005 (when only 410 M and the private single-family homes were occupied). My guess would be that the population got down to around 400 during that time, if not lower.
Income-related demographic numbers for 2010 aren't yet released, but it's not hard to assume that those numbers will show an equally dramatic change.
And now that the city's numbers are out, the fun really begins with the need to redraw the ward boundaries, which will then beget a redrawing of the ANC boundaries. ANCs are supposed to have about 2,000 residents per single member district--will Near Southeast cease being covered by a single SMD? Or, for that matter, will all of Near Southeast remain in Ward 6, given the noises Marion Barry is making about the necessary redrawing of Ward 8's boundaries? "I'll defend the riverfront," is the quote from Field Marshall Thomas von Wells. (Hey, we kid because we love.) "Ward 6 should remain the same."
(Note: I wrote a slightly different summary of Near Southeast's census numbers for the Post; the numbers cited in that article use the Post's internal numbers by neighborhood instead of going purely by Tract 72. Not sure exactly where the different boundaries are, but I'll stay with Tract 72 here since it's easier to get access to those numbers publicly for checking and comparison.)