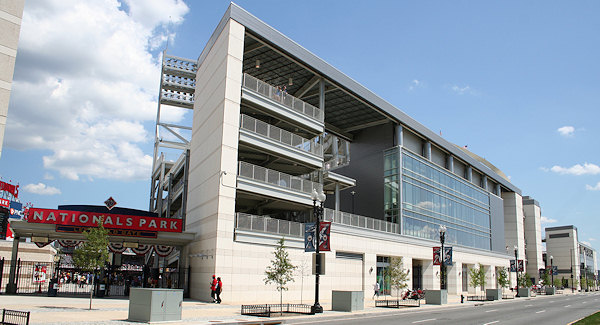 From the WashTimes SportsBiz blog: "The District of Columbia has successfully made its first debt service payment on Nationals Park, despite the lack of a rent check from the Nationals. The first debt payment of $13.9 million (all interest) was due Friday and was made without complication[.] The $3.5 million rent payment is a key portion of the money used to pay back the $535 million in bonds used to finance the stadium. But it appears that the city was able to raise enough money through other financing components to cover the gap." (As reported a few weeks ago, the Nats are withholding rent over whether or not the stadium was "substantially complete" on Opening Day.) The debt payment is financed by the ballpark ticket/concessions tax, a utility tax, and the ballpark fee assessed on city businesses (which is coming in substantially higher than was projected). 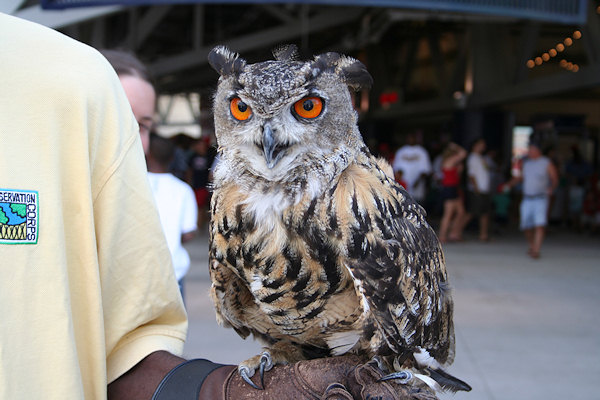 Speaking of the ballpark, one of the neighborhood's longtime residents was in attendance Sunday, as a guest of the Earth Conservation Corps. (See the full-sized photo--he's quite stunning!--and other shots I've taken here and there in my Scenes from the Inaugural Season gallery.) I also finally updated my photos of the ballpark's South Capitol Street facade from the Left Field Gate down to the admin building, as well as some other new shots along Potomac Avenue that I hadn't updated since March--and that means I can finally declare my Ballpark Exterior Before-and-Afters complete, at least until they rename the place and change all the signage....
Aug 4, 2008 1:06 PM
Onyx Looking Close to Opening; 909 Getting Bricked

A few weeks ago I was told that the Onyx on First apartment building would probably be opening its first three floors in early August, and judging by the newly installed sidewalk along First Street and a peek into the lobby, it doesn't appear to be far off. The building will have approximately 260 units, and began construction in fall 2006. On my Onyx project page, you can see updated photos, along with a few new images of the buildings that preceded Onyx on this site.

Two blocks to the north, 909 New Jersey speeds along, with its distinctive roofline now visible from many locations around the neighborhood, as you can see both on the project page and in the Expanded 909 Photo Gallery. (What do we call this roof thing? The crow's nest? The bow?) The photos also show that brick is now being added to the First Street side of the building. This 237-unit rental building with ground-floor retail space will be the third of JPI's four "Capitol Yards" residential developments, and is expected to be completed next year.
(And while you look at all the latest photos, be sure to take a moment to thank the supreme being of your choice for bestowing upon us Sunday's gorgeous weather and severe clear blue sky, which is such a rarity given DC's normally haze-filled Augusts.)
Aug 4, 2008 7:01 AM
Watching the Skyline Change Beyond the Ballpark

One of the bazillion spots where I took photos this weekend was up high above home plate at the ballpark, gazing off at the skyline to the north. It was only 11 months ago that I got my first photos from there, so check out the archive to scroll through the changes from Sept. '07 to Aug. '08. There are seven buildings (some of which are already out of view) that have popped up and topped out during this very brief time.
Coming soon, the photos I took this weekend at ground level of all these new buildings.