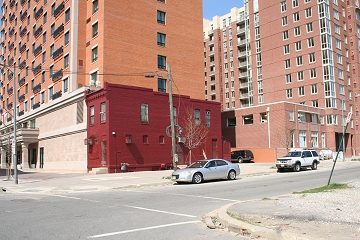 I've gotten an update this evening on what is affectionately referred to around here as the "Little Red Building," the two-story townhouse on the eastern edge of the Courtyard by Marriott on L Street, SE. The owner has passed along the news that he has received his construction permits for a new two-story building that will house an upscale liquor store to be known as "Parkway Wine and Spirits." This does mean that the LRB is going to be demolished, and fences should go up tomorrow (Thursday) around the site. He expects the construction to take about five months, and since there will be some noise and disturbance while the work is underway, he wanted neighbors and residents to have advance notice.
Here's the design plans for the exterior of the new building; hopefully we can also get some information on his operational plans (and what sort of goods he'll be stocking) soon. Looks like the new building will be brick as well, and of a similar design--I hope it'll still be red!
(And I have to admit that I'll be sorry to see it go, since it's the subject of one of my very first [and still one of my most favorite] photos.)
Jun 30, 2010 2:01 PM
Metro and Donatelli Negotiating (Still!) for 'Chiller Plant' Site Development at Half and L, SE
Today WMATA sent out a press release touting a new web page highlighting its "dozens" of current and recently completed Transit Oriented development projects. And lo and behold, on the page for the Navy Yard "Chiller Plant" site on the southwest corner of Half and L, we find out that Metro has been negotiating a development agreement with Donatelli Development since the summer of 2008 (!) to build an 84-unit apartment building with ground-floor retail on the 14,000-square-foot site. Metro would continue to own the land and would receive lease income from the site, while Donatelli would be responsible for incorporating two new, larger, 350-ton chillers within the project (so that everyone down in both the Navy Yard and Waterfront-SEU Metro stations stay nice and climate-controlled). 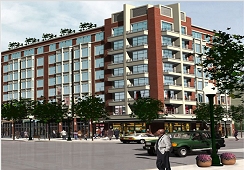 Metro says that this stalled development agreement is now "expected to be executed in the summer of 2010," with a lease between the companies to be signed about 18 months after that, once all development and construction permits are obtained. They say "late 2013" is when the project would open. At right is a rendering from the WMATA site of the proposed building. (Note that the footprint of this project does not include the cab company building just to the west at 37 L.)
(And yes, I'm hanging my head in shame for not knowing about this. I knew that Metro was negotiating with *someone*, but had never heard who, and figured it fell through as time passed with no announcement. Maybe I'll take all of August off as punishment.)