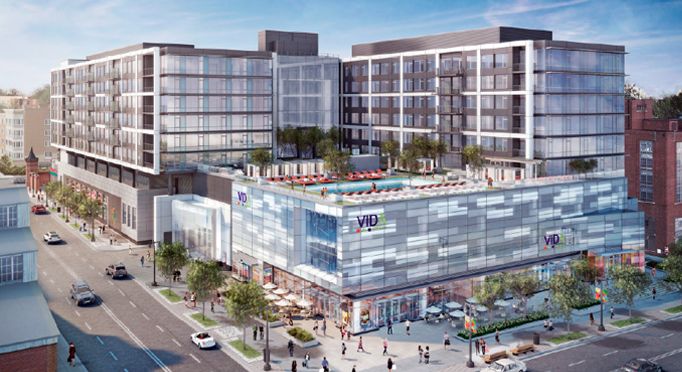 With this photo yesterday from the little Yards tent display at 1st and N lighting the fuse, the announcement was made today that local salad chain Sweetgreen will be coming to Twelve12, the new 218-unit apartment building now under construction at 4th and M SE that will also be home to Harris Teeter and Vida Fitness.
Sweetgreen is currently expected to open in mid-2014, and will be located right on the corner of 4th and Tingey, with "exposure" on both streets, as seen in the image at right.
Forest City's press release for today's news also gives some timeline updates for the Boilermaker Shops, saying that Bluejacket and Buzz Bakery are expected to open in June late July/early August, Nando's Peri-Peri "this summer," and Willie's Brew and Que "in late summer." Over at the Lumber Shed, Osteria Morini is expected "in mid-late summer of this year," and Agua 301 is coming "this summer." And, as reported last week, year-round pizzeria Nicoletta will be coming to the Yards Park boardwalk "in late 2013." In the non-food category, Desi Living Loft Furniture is still expected in June.
UPDATE: Forest City sent an update to the expected opening date for Bluejacket/Buzz Bakery.
UPDATE 2: And now there's a Sweetgreen rendering.