2 Blog Posts
Feb 25, 2010 9:12 PM
Bullpen Back for Another Season; Other ANC 6D Doings
The snowblown February ANC 6D meeting finally went off tonight, and here's the Near Southeast-related bullet points:
* The Bullpen will be back in action this season, in its same spot on the northwest corner of Half and N across from the ballpark. There were two requested changes to the voluntary agreement between the ANC and the owner: that the bar be allowed to operate until 1:30 am (with alcohol sales ending at 1:00), and that liquor in non-frozen form be allowed alongside the already approved beer, wine, and frozen drinks, both of which are already allowed under the liquor license. The discussion was more contentious about process than it was about content (with commissioner David Sobelsohn arguing strongly that the motion should be tabled until the next meeting, which none of the other commissioners were interested in), but in the end the commission voted 6-1 to approve the extended hours, and that mixed drinks could be served during private events. There were some concerns from commissioner Rhonda Hamilton about the noise at the bar on weeknights, but owner Bo Blair said that live music will always be cut off by midnight.
* There is a move afoot by commission Bob Siegel to carve out some of the curb space in front of Capper Seniors #1 at 900 Fifth Street (which it must be noted is also across the street from his house). The street, which is one way in the block in question (between K and Virginia) gets clogged on a regular basis thanks to shuttle buses, vans, trucks, and other vehicles double-parking while at the building, and the residents want a portion of the curb cut out to allow vehicles to pull out of the traffic lane (like the one in front of the Courtyard by Marriott entrance). DDOT initially rejected the request because it was called a "curb cut," which means something different in traffic parlance, but DDOT's Ward 6 planner Jamie Henson was in attendance and pledged to help the ANC work with the engineering side of DDOT to see what could be done without taking away the sidewalk or the ADA ramps to the building.
* There was supposed to be an update from the Nationals, but no reps from the team were there; ANC chair Ron McBee did report that April 23 will be "Neighborhood Night" at the ballpark, with the first pitch and national anthem being performed by nearby residents and other goodies as well. (I imagine discount tickets will be part of the deal, but nothing was said. The game is against the Dodgers.) McBee also said that the ANC has requested a meeting with DDOT about the Traffic Operations and Parking Plan for this season, to check on how it's all going, but no specific concerns were mentioned. (With the Nats Express no longer shuttling fans to and from parking at RFK, there probably will be a noticeable uptick in traffic this year, even if attendance remains steady.)
* The next 6D meeting will be on March 8 at 7 pm, and it'll be held at the Courtyard by Marriott at New Jersey and L, so if you've been dying to go to a meeting but haven't felt like venturing across South Capitol, you'll get your chance. It's also worth mentioning that ANC 6B's meeting the next night includes an update by CSX on the Virginia Avenue project on its agenda.
Feb 25, 2010 5:06 PM
Trapeze School Opening Friday; Some Photos 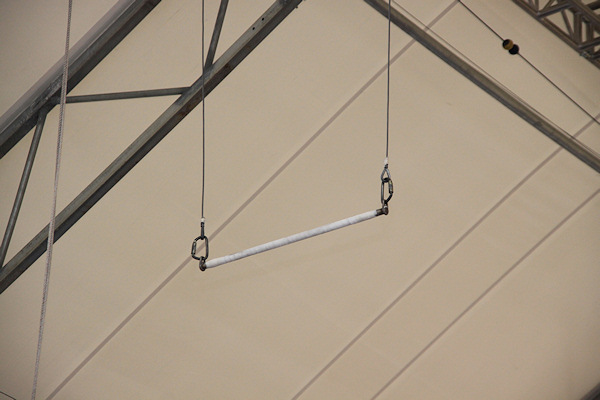 Despite the snows of February putting a bit of a crimp in their schedule, the Trapeze School New York's Washington outpost has gotten all of its permits and is holding its first classes on Friday in its new home on Fourth Street south of Tingey in The Yards. They were nice enough to invite me down for a sneek peek, so here's a few shots from inside their tent (which I will always think of as Ice Station Zebra) as they finish up preparations. Once spring finally, um, springs, they'll be running classes outside as well, on the open lot next to the tent.
There's also one bonus photo, which shows a nice bit of movement at the Yards Park--the terra cotta corrigated tin skin on the old Lumber Shed is being removed, for what eventually will be glass walls on a retail pavilion: