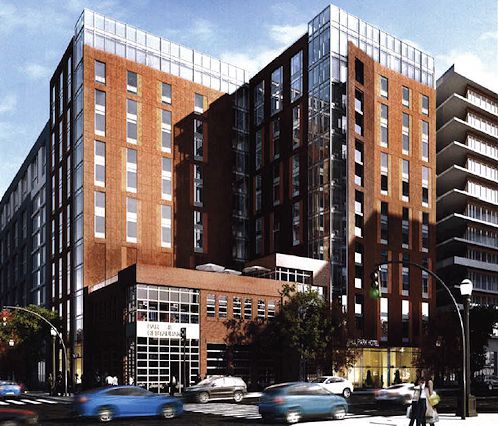 With newish Sigal Construction signs now up on the fences on 1st Street just north of Nats Park acting as confirmation, WBJ reports today that construction is going to start "any day now" on the 168-room Hampton Inn and Suites that was announced a little while back. A shoring/sheeting permit for a portion of the site was approved in late December, though the building permit itself is still in process.
The article says that construction is expected to be completed in the second quarter of 2015--perhaps the lack of underground parking for the project and the shoring permit only for one of the five lots the hotel will be situated on means that there won't be as much digging as one would normally see for a 13-story project, which would speed up the timeline.
This hotel, being developed by the Buccini/Pollin Group, is an L-shaped building that will be wrapping around a separate two-story retail project by Grosvenor right on the northwest corner of 1st and N. And Grosvenor has its own hotel (and a residential building) planned on the same block, just to the north of the Hampton Inn, though no start date has been announced. 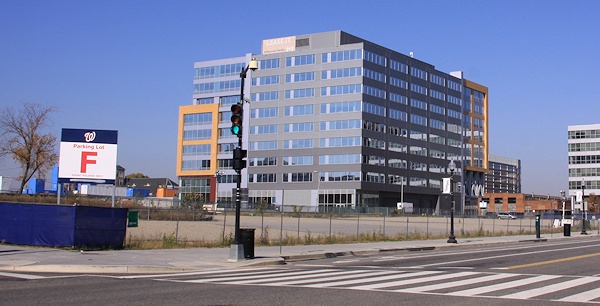 The start of this project may be taking some parking away from the far southern end of Nats Lot F, though I have to admit that I'm not 100 percent sure that this portion of the lot was used last season. Rocklands BBQ had set up a food truck during games on the corner lot (where the retail building will go), but I don't remember if more fences went up a little north of that lot or not. Perhaps someone who parks in Lot F as a commuter can help with the timeline.
Confused? Don't worry, it'll all become clear, but perhaps checking out my Square 701 page--which covers the Hampton Inn, and the Grosvenor/Skanska Ballpark Square project--will help.
This is the first non-residential new construction building in the neighborhood since the 1015 Half Street office building was completed in 2011. And it is the second hotel in Near Southeast, joining the Courtyard by Marriott at New Jersey and L that opened in 2006.