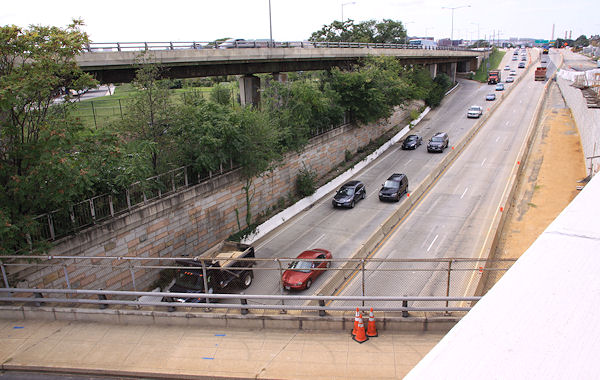 The next step in converting the sunken portion of the Southeast Freeway between 8th Street SE and Pennsylvania Avenue to the eventual at-grade "Southeast Boulevard" is coming, as DDOT has announced that on Jan. 31, "all eastbound lanes along this stretch will be closed to traffic for approximately 18-20 months while crews fill the roadway to restore it to the local street elevation."
This will be preceded by for a week or so beginning around noontime on Tuesday, Jan. 22, with the route being reduced to only one lane. 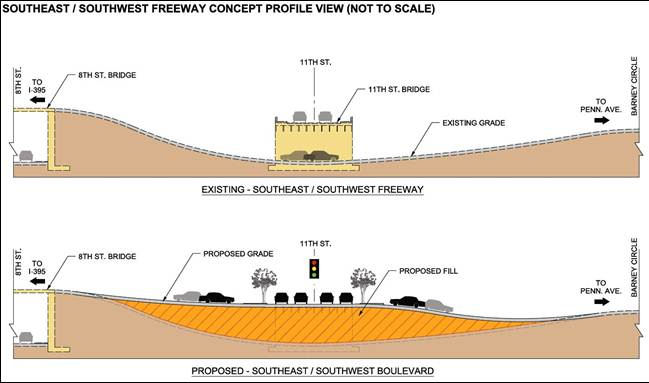 Not only are these closures to allow for the filling-in of much of the old roadway, but also to start construction of bridge piers for "a new bridge over the SE Freeway," which I believe will be the new three-lane flyover ramp from the freeway to the outbound 11th Street Bridge, replacing the current one (seen at top left in the photo).
If you're worked up about this closure because you're using the route to Pennsylvania Avenue to then use the left-turn-to-DC295, you should already be using the new exit ramp from the outbound 11th Street Bridge directly to northbound 295 anyway!

The work of bringing in lots and lots (and lots and lots) of dirt to build up the sunken route has already begun on the old westbound side of the road, as seen in this photo I took earlier this month, when I also updated the before and afters for the 11th Street & not-yet-Southeast-Blvd intersection.
If you haven't been following this project, which is part of the $90 million second phase of the 11th Street Bridges project, the filling-in is so there will be an at-grade signalized intersection at 11th Street, SE. Drivers will arrive at the new intersection from the SE Freeway (or Pennsylvania Avenue) and have the option of getting onto 11th Street, or continuing straight. There will also be a new stretch of 12th Street north of M to Southeast Blvd., so that drivers exiting the 11th Street freeway bridges can continue north across M to the new boulevard, instead of turning left onto M and then right onto 11th.
There is also supposed to be a new pedestrian/cycling trail alongside this new Southeast Blvd., creating another connection between Virginia Avenue Park and Barney Circle than using the currently-ripped-up-by-DC-Water M Street route.
This construction drawing shows all the new intersections, ramps, flyovers, and whatnot for both phases of the project on the west side of the river, if you need some help visualizing.
There are also supposed to be public meetings coming this year as part of studies now underway on how to remake the Barney Circle-not-yet-Southeast-Blvd interchange.