peek >> << back
Near Southeast DC Past News Items: dentist
Advertise on JDLand


1 Blog Posts Since 2003
Mar 9, 2018 8:07 PM
Tidbits: A Dentist, Biscuits, Roof Tiles, Road Closures, and a Tour
Getting caught up on a few things after my terribly busy week of laying on the sofa rehabbing my hip: 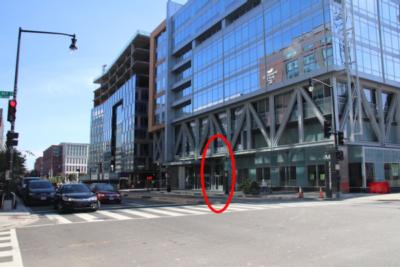 * NAVY YARD DENTAL OPENS: Now open and accepting appointments in the ground floor of the 55 M Street office building at Half and M (the one on top of the Metro station entrance) is Navy Yard Dental, where Chad Jones, DDS is available for all your toothy needs. (Sorry I don't have a current photo. Will update with one when I get there.) But maybe don't race across the street to Shake Shack right after getting your teeth cleaned.
* BISCUITS POPPING UP: Commenter Ampersand reports that Eater DC reports that next week Ice Cream Jubilee will partner with the Mason Dixie Biscuit Co. to offer savory biscuit sandwiches and shortcake-like strawberry sundae sandwiches during afternoons through the end of May.
* CLOSING THE ROOF: The Virginia Avenue Tunnel construction team reports that the final roof panel of the entire two-tunnel project was placed this week. Still a lot of work to do, but CSX says that the project remains "on time" and expected to be completed this fall.
* SPEAKING OF CLOSINGS: I mentioned this in my last post, but that was forever ago so I'll mention again that in order for the tunnel project to continue along toward completion, CSX is expecting to temporarily close both the 4th Street and 5th/6th Street intersections next week, possibly as early as March 14. The closures are expected to last 3-4 months, and it means that the now-once-again-two-way 3rd Street will be seeing a lot of extra traffic.
* VAN NESS SILENT AUCTION: Sorry to mention this with only a day left to go before it finishes (I did mention on Twitter and Facebook, at least), but the Van Ness Elementary PTO is having a silent auction fundraiser, and among such items as tickets to see Pink, dinner at Rose's Luxury, Nats tickets, and other highly enticing offerings is the chance to take a neighborhood walking tour guided by none other than yours truly this spring. (Or, if I haven't recovered sufficiently, the chance to pull me around the neighborhood in a little red wagon.) There are ten bidding slots to win two tickets, with the bids right now ranging from $45 to $75 with 24 hours to go.