peek >> << back
Near Southeast DC Past News Items: capper-sq769n
Advertise on JDLand


1 Blog Posts Since 2003
Apr 20, 2018 3:35 PM
April Construction Report: New Fences to Peek Behind, and More
Yes, it's time for another edition of JD Looks Behind Fences and Into Holes So You Don't Have To, and we start the rundown with two new spots to add to the lineup, where dirt has just begun to be moved: 71 Potomac, the 264-unit sibling to Dock 79 at Florida Rock, and "Square 696," Tishman Speyer's still-not-publicly-unveiled residential and retail project on the block bounded by I, K, 1st, and Half Streets. Plus I'll add an up-to-date shot of the excavation at Paradigm's 1000 1st Street project, just because it doesn't fit anywhere else in this post: 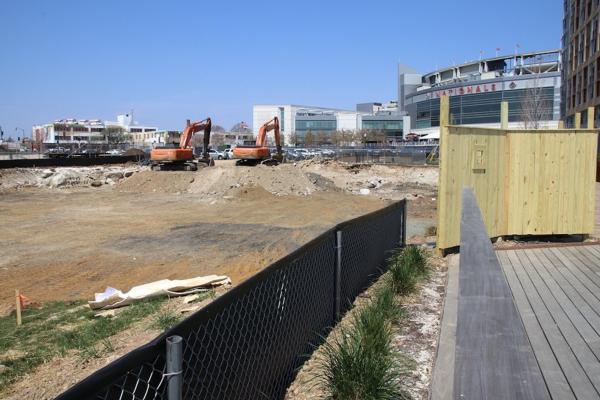 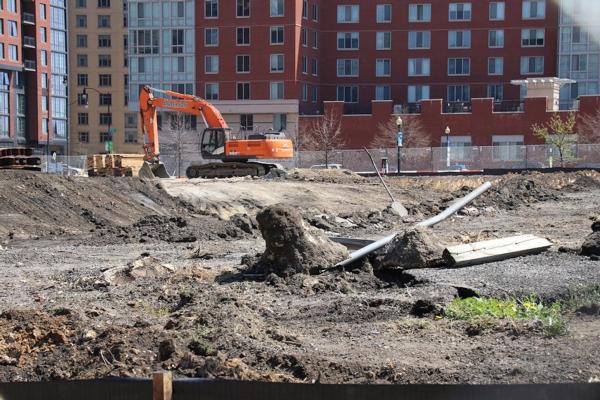 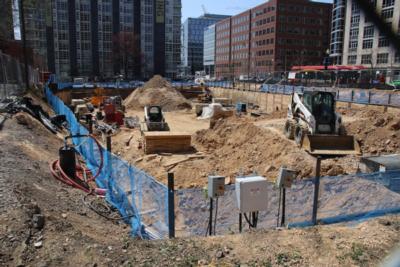 (Note that I'm giving Tishman a few more weeks before I craft my own rendering. And thanks to the 71 Potomac folks for the pretty wood fences with holes in them that are perfect for snooping bloggers to look through!)
Next, let's talk about the "hybrid" hole in the ground at 1250 Half Street, aka the old Monument Valley site just across N Street from Nats Park. This is where two cranes mark the slow beginnings of vertical construction at the bottom of the hole, while six-plus floors of construction are already complete at the north end of the project, since that part of the hole was dug and the foundation was completed back in 2007 when Monument thought it would be building out the entire block instead of just the 55 M office building. This is where a two-phase project with up to 440 units of residential and more than 60,000 square feet of retail will be built: 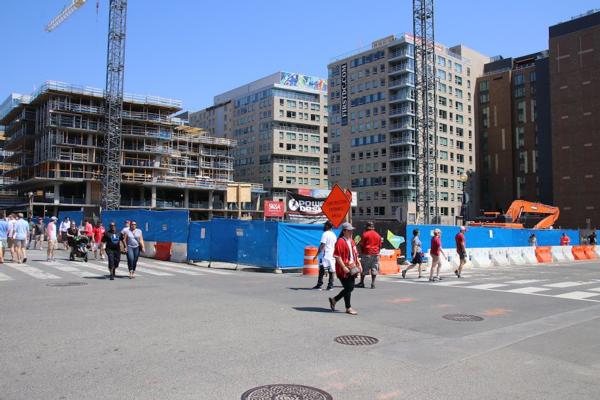 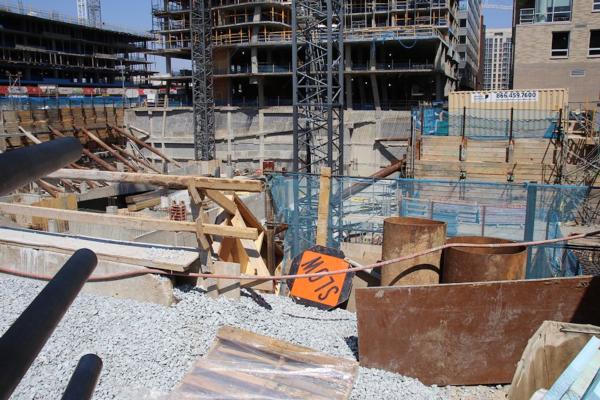 (I need this project to hurry up and get to ground level because it's impossible to get a shot of the bottom of the hole without going up to a nearby roof.)
Now we'll move to the corner of South Capitol and M, where the National Association of Broadcasters HQ is graduating from hole-in-the-ground to skeleton, while its sibling, the condo building Avidian, is still not quite yet visible above the fence line. I forgot to walk down to get a photo through the fence of the Avidian footprint, so instead I'll just include this very bad shot I took a few weeks ago of the first hints of construction on the new Douglass Bridge, because it needs to be documented. 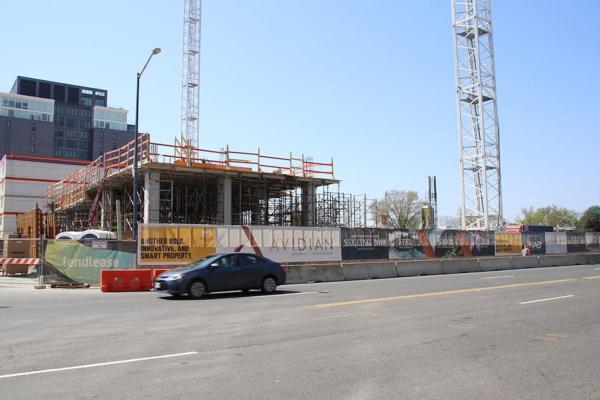 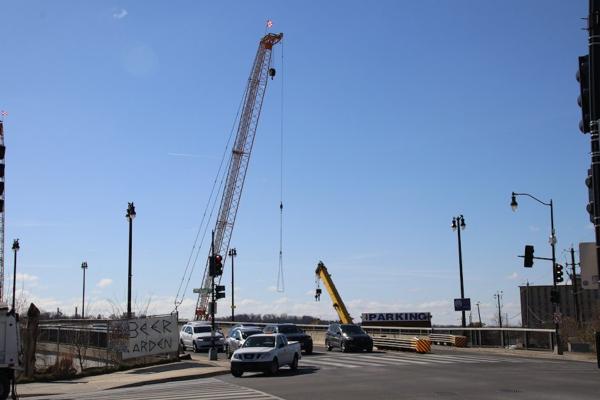 Three more projects are on their way upwards, including the Garrett at 2nd and I and the co-projects Parcel L residential/Thompson Hotel hole at 3rd and Tingey in the Yards shown here. (I forgot to get a shot of the Parc Riverside II hole. Probably looks like a hole with concrete and rebar, like the others): 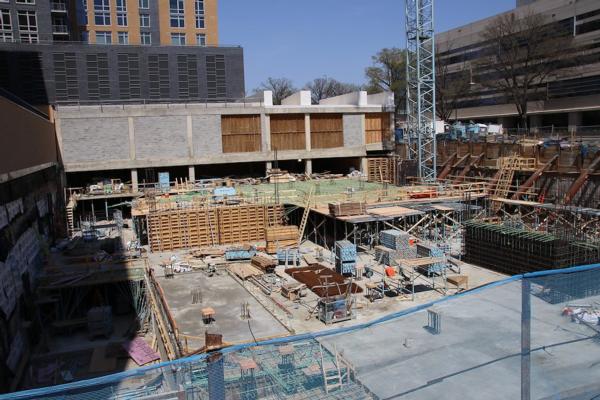 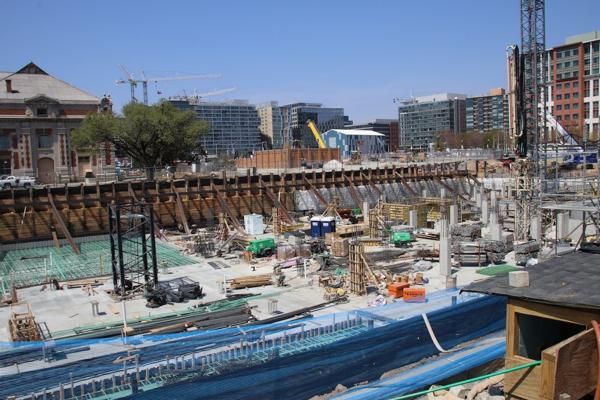 So, in case you're not counting, that's nine projects either still below ground or just at ground level (or 10 if you include the permanently below-ground Virginia Avenue Tunnel, or 11 if you include the currently below-water Douglass Bridge work).
Then you can add those to the eight other projects that are above-ground, topped out, or nearing completion, and you can understand why it's okay to feel like the neighborhood is still a perpetual construction site, and will be for a while yet. Here's shots of seven of them, in order of progress: the 99 M office building, the DC Water headquarters, the Bower condos and sibling Parcel O rental building, and additional residential projects 2 I Street, Square 769N, and West Half (alas, I haven't made it over recently to check out the status of the Emblem condo project at 8th and Virginia, so I'm one short): 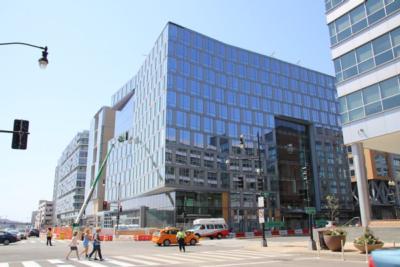 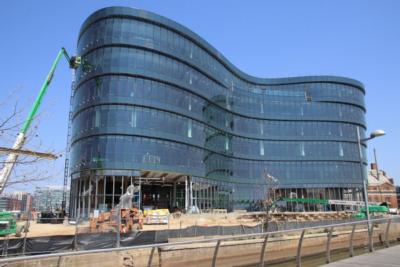 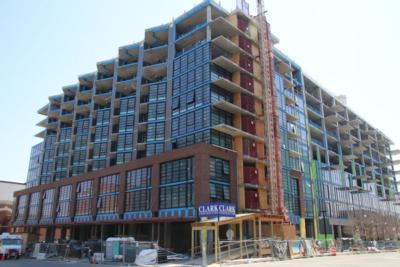 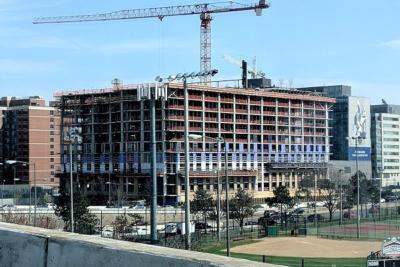 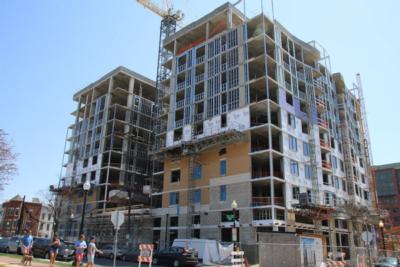 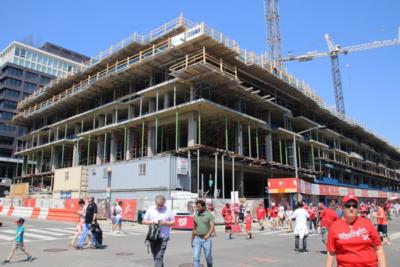 No wonder I'm so tired.