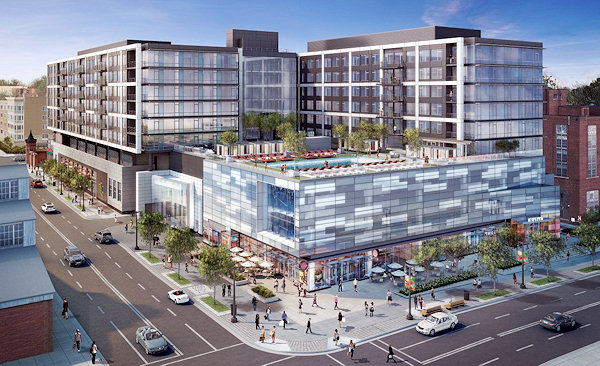 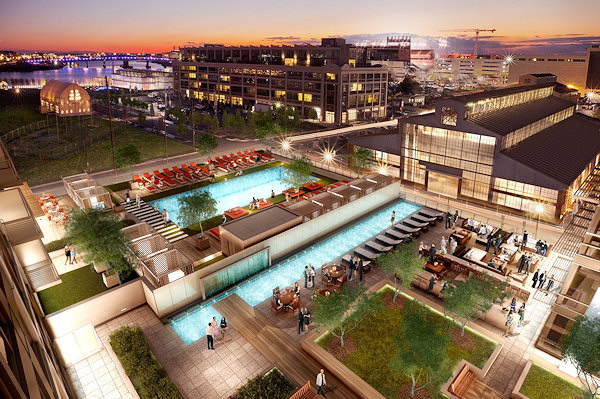 It took a loooong time to get past the unconfirmed stage (and even included an oopsie cat-out-of-the-bag last year by some PR folks), but today Forest City Washington is finally officially announcing that Vida Fitness is coming to the south end of the Twelve12 apartment building, now under construction on 4th Street SE between M and Tingey in the Yards.
Also in the 28,000-square-foot facility will be Vida's "affiliated concepts" Bang Salon and Aura Spa, and will also feature Vida's Penthouse Pool Club and Lounge, shown in the above-right drawing and described as a "membership-only urban resort featuring a rooftop pool deck with city and riverfront views and a variety of poolside lounging options and amenities."
Twelve12, when completed in mid-2014, will also be home to the neighborhood's first grocery store, a 50,000-square-foot Harris Teeter located on the north end of the block at 4th and M, in addition to the building's 218 apartments. There is also still 10,000 square feet of as-yet-unleased retail space. It is across the street from the Boilermaker Shops retail pavilion, set to open in early 2013, and kitty corner from both the Foundry Lofts and what will be a new 325ish-unit apartment building on the southwest corner of 4th and Tingey, expected to start construction in 2013.