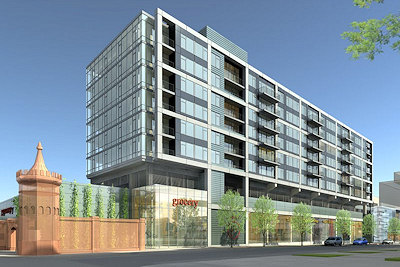 * The commission voted 7-0 to support Forest City's zoning requests for its Parcel D project, the combination residential and retail (and grocery store) development on the southeast corner of 4th and M, SE. I wrote about it in detail a few weeks back, and you can see my Parcel D project page for renderings and additional information, but the short of it is it's a 220ish-unit residential building (with 20 percent affordable housing), a 50,000-square-foot grocery store, and an expected 24,000-square-foot fitness/spa company.
The Zoning Commission hearing will be on December 2, and Forest City is asking for two special exceptions (having to do with roof structures and the proposed 110-foot building height, which will be above the 90 feet that's allowed) and two variances (for a curb cut on M east of 4th for a new private service drive east of the new building and also for some balconies overlooking 4th). Forest City's Alex Nyhan also told the commission that, while the entire Yards project is designed to be LEED Gold, they are going to shoot for LEED Silver on this particular portion.
ANC 6D07 commissioner Bob Siegel commended Forest City on the plans, though he made very clear that he and his constituents want a sit-down restaurant more than anything. Nyhan replied that the Boilermaker Shop project one block to the west on Tingey will have four or five restaurants including at least one sit-down one when it opens next fall. Siegel then made the motion to the support the project, Commissioner Sobelsohn seconded, and the vote was unanimous. The National Capital Planning Commission and the US Commission on Fine Arts have both recently voted to support the plans and designs.
* During the public safety report, Capt. Gottert of MPD mentioned that while there were a rash of car thefts in PSA 105 (and 106 and 107) during the past few months, the police had a suspect in mind, and now that he's been apprehended, the thefts have stopped. Gottert had no additional information on Saturday's carjacking at 1st and L, SE.
* The agenda had as one of its items a request by the Nationals to add the stadium to the Navy Yard Metro station name (coming on the heels of the Capitol Riverfront BID's request last month to add their name to the station). However, ANC chair Ron McBee said that the Nationals hadn't yet been able to get their request completely lined up yet, and so the item was postponed.
* Next month's meeting will be on Nov. 8, and will be held at the Courtyard by Marriott at New Jersey and L, SE. Expected agenda items include an update from CSX about the Virginia Avenue Tunnel project, a plan to give historic landmark status to St. Paul's church on the southeast corner of 4th and I, SE, and an update on the 11th Street Bridges construction.