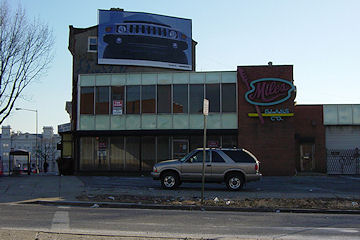 The "Miles Glass" site on the southwest corner of 8th and Virginia has been vacant and for sale for a number of years now, but in late August it was purchased for $3.5 million, by the National Community Church, the group behind the rehabbed Ebenezers Coffeehouse near Union Station in Northeast. According to their web site, NCC is "one church with [six] locations," broadcasting their Sunday services at multiple locations in addition to Ebenezers, such as the old Tivoli Theater in Columbia Heights and movie theaters in Georgetown, Ballston, Kingstowne, and Potomac Yard.
The church's head, Mark Batterson, wrote on his blog in late August about the purchase of the 8th and Virginia site, which he called "the last piece of property on Capitol Hill." The church is running out of space for services and staff at Ebenezers, he wrote, and since his vision for NCC is 20 locations and more than 100 staffers, they're looking at "going vertical" and constructing a building with about 50,000 square feet of space.
I don't know anything at this point about timing, design, or anything, but I'm guessing because of its location on 8th Street any proposed building will have to go through the city's zoning processes (as well as probably historic preservation and ANC 6B). And it looks like they may be in the very early stages of design themselves, because today is apparently the "visioning charrette" for the new property.
Note that the purchase covers the Miles Glass building and attached garage as well as the vacant lot just to the west. But the adjacent storefronts on 8th Street, including Al's Deli, are not part of the purchase.
As for managing to secure the property, apparently there must have been some divine intervention, because according to Batterson, NCC lost the contract to other parties three times before finally purchasing the site.