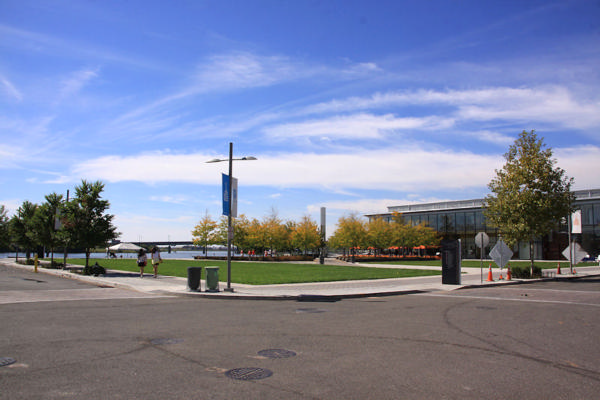 Rumored a few months ago after a liquor license application appeared in the pipeline, it's officially being announced today by Forest City Washington that the owners of Brooklyn Winery will be opening DC's first "urban winery" in a new 16,000-square-foot pavilion on the southwest corner of 4th and Water Streets SE in the Yards Park.
It will be named District Winery, and is to "feature the most popular components" of the Brooklyn version--it will be a full-service restaurant, and will also have a wine tasting area, a private events space with an open-air terrace, and, "of course, an impressive collection of wines, crafted and aged onsite." The Brooklyn operation is also apparently a quite popular venue for weddings.
The new pavilion's design will apparently be quite a wood-and-glass look that will echo the nearby Lumber Shed and the Yards Park itself. When I wrote about the rumors back in May, I included some 2009-era imaginings of what the pavilion could look like from when the Yards Park was going through its approvals process, but my understanding is that the design has evolved considerably, with District Winery's input. (No new renderings are being made available just yet, however.)
Forest City says it expects to start construction in the spring of 2016 and that the winery would open in the fall of 2017.