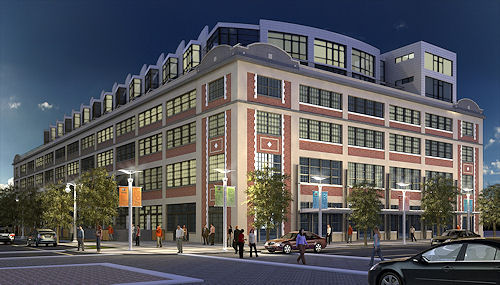 Jonathan O'Connell of the Post has just sent out two tweets saying that the DC Housing Finance Agency and Forest City Washington have closed a deal to finance the affordable housing component of the Foundry Lofts project at The Yards, which will allow this stalled renovation of the old Building 160 (stopped in late 2008 when the original affordable housing financing fell through) to restart within the next two to three weeks. The building, when completed, will have 170 residential units, 34 of which are slated for tenants earning less than 50 percent of the area median income. The old industrial building, which will also get two new floors on top and will have 10,000 square feet of ground-floor retail, sits two blocks east of Nationals Park, between the US Department of Transportation headquarters and the soon-to-open Yards Park on the Anacostia River. My understanding has been that, once restarted, it will take about a year for the building to be finished.
UPDATE: Here's a WBJ story with more information on the bond financing that was pulled together, not only for the Foundry Lofts but other projects in the city that needed money to start and/or finish apartment projects with affordable housing.
UPDATE II: And here's the full WashPost story. And Forest City's press release.
Aug 19, 2010 12:10 PM
Tiny Followups For Yesterday's ANC/Yards Park Posts
Guess I should have been lazy (er, lazier than usual) and waited 24 hours on each of my posts yesterday, because there's small tidbits to add on both:
* While the Yards Park "official opening weekend" is set for Sept. 10-12, invitations have now begun landing in mailboxes for a ribbon cutting/dedication ceremony on Sept. 7.
* There is now at least one challenger to ANC 6D07 incumbent Bob Siegel--according to the DCBOEE, Capitol Quarter resident Bruce DarConte has filed his paperwork to run. And I'm hearing rumors of at least one more resident planning to jump into the race as well.
In other non-followup news, eagle-eyed readers might notice in my DC permit feeds an approved public space/excavation permit for its planned 1111 New Jersey office building site. But don't read too much into it--there's still no announced plans to start construction anytime soon.
UPDATE: Oh, and a PS: The Top Chef DC episode filmed at Nats Park back in the spring is coming up next week (Wednesday, Aug. 25, at 10 pm, on Bravo). It appears to be a stadium-food challenge, with the "chestestants cheftestants" cooking and serving in the various food bays along the concourse.