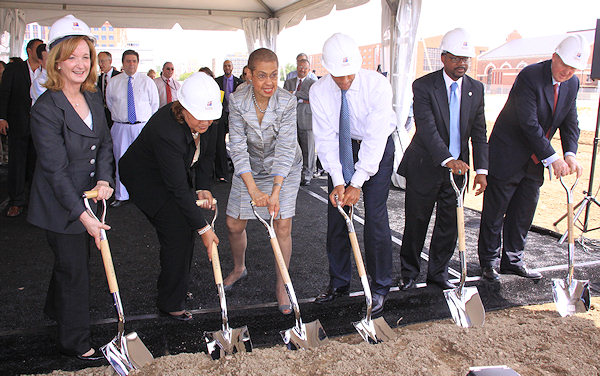 I'll let the gaggle of "real" media that was on hand today cover what was said (check back later today for links), but I can at least provide some photos from today's groundbreaking on the $42 million five-acre Park at the Yards, the first phase of which is scheduled to open in the middle of next year. Mayor Fenty, councilmembers Tommy Wells and Kwame Brown, DC delegate Eleanor Holmes Norton, and Forest City Washington president Deborah Ratner Salzberg did the honors of turning the dirt (the mayor and Eleanor took at shot with some heavier equipment, too, as you'll see in the photos). And, just for history's sake (and because it all looks kind of familiar), here's photos from the October 2007 groundbreaking for the Yards itself.
The park is being funded by the proceeds from the USDOT payment-in-lieu-of-taxes bonds, and the park will be dedicated to the city when it is completed. The Capitol Riverfront BID will be in charge of maintaining the park--in fact, my photo gallery from last year's announcement of the public-private partnership has some good renderings of the park, though for all the scoop and images on the park's three phases (and what the area looks like now), go to my Yards Park page.
UPDATE: First out of the gate is WBJ, using Fenty's "a world class city needs a world-class waterfront" quote that I was totally going to post myself, except I didn't bring a pad and paper and so didn't get it written down. (Also, the park isn't "five blocks east" of Nationals Park--more like two, from First to Third, and even that's being a bit over-cautious, since the western edge of the park will be a new extension of Second Street, just to the east of the WASA main pumping station.)
UPDATE II: Here's Fox5's report, which doesn't quite get that the groundbreaking was for the park and not all of the Yards, where work has already been underway. And their ID'ing of "Deborah Ratner Salisbury" doesn't help, either. NBC4's piece is more accurate. ABC7 appears to have run a report, but it's not on their web site (yet).
UPDATE III: WAMU's story, and the mayor's press release.
UPDATE IV: A new night-time overhead rendering: 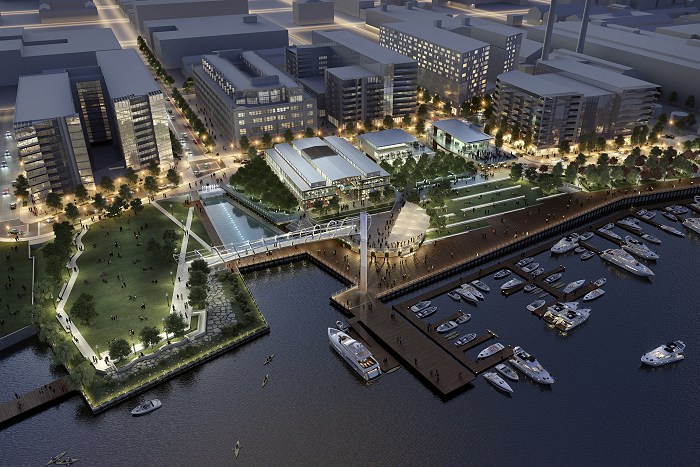 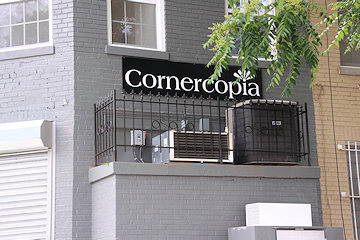 Still haven't heard anything about an opening date, but it's probably worth noting that the Cornercopia (all one word!) Deli at Third and K now has a sign up on its facade (see a non-scrunched version of the photo here)....
May 28, 2009 8:52 AM
WalkingTown DC Capitol Riverfront Tour
In yesterday's Upcoming Events post, I forgot to include one other item: this Sunday's WalkingTown DC tour of the "Capitol Riverfront," led by the BID's executive director, Michael Stevens and sponsored by the BID and Forest City Washington (developers of The Yards). It starts at 11 am at the Metro entrance at New Jersey and M, and no reservations are required. The description: "The Capitol Riverfront is DC's new neighborhood on the river, a growing district-within-the-District that extends the city's skyline to the water's edge. Discover the history behind the growth of this new neighborhood, its industrial heritage, and historic buildings now under renovation as part of The Yards development with a focus on sustainable development and riverfront renewal."