peek >> << back
Near Southeast DC Past News Items: peterchang
Advertise on JDLand


1 Blog Posts Since 2003
Mar 3, 2015 9:15 AM
Tuesday Tidbits: What's in a Name, Anyway?
Catching up a bit:
* CHEF SCOUTING: Master chef Peter Chang and his partners are "looking in the Capitol Riverfront neighborhood for a 6,000-square-foot space that could, when finished, serve as Chang's fine-dining flagship." He is about to open restaurants in Rockville and Arlington, alongside his existing Richmond and Charlottesville offerings that all showcase his "genuine, flame-throwing Sichuan cooking" considered to be some of the best Chinese food in the country. However, given that the word "peripatetic" is often used to describe him, we'll see what happens. (WaPo)
* FESTIVAL FESTIVALING: The National Cherry Blossom Festival will close this year with a new event, the Anacostia River Festival, on April 12 from noon to 4 pm at Anacostia Park. A joint effort by the 11th Street Bridge Project and the National Park Service, it is expected to feature boating, fishing workshops, tours of historic Anacostia, and "other unique programs to engage families with the environment."
* POOL CLUBBING: VIDA's Penthouse Pool Club opens on May 1. Assuming it has stopped snowing by then. 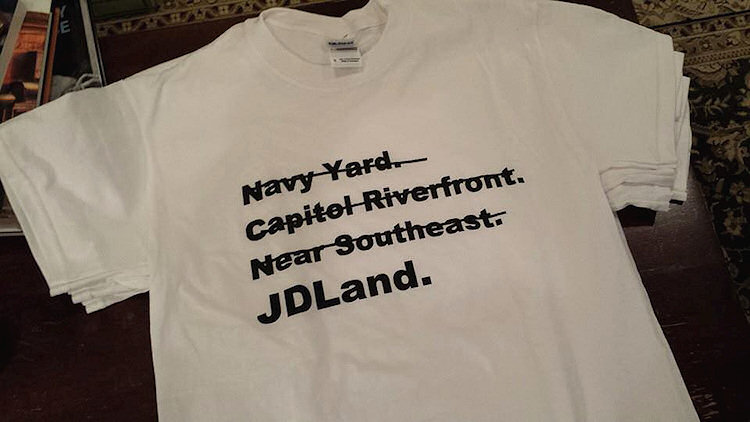 * AHEM: I've referenced this in a few unofficial places, but might as well just give it the full-on treatment. Recently Mr. JDLand was struck by a creative bolt of lightning (or perhaps was just tired of listening to me rant and rave), and presented me with the design at left. With tongue most firmly in cheek, I admit it cracks me up. If you would like to be among those making such a bold statement, the shirts are $12, available in S-M-L-XL. An in-person hand-off can probably even be arranged if you live within the general JDLand listening area. Shoot me a message if you are interested.