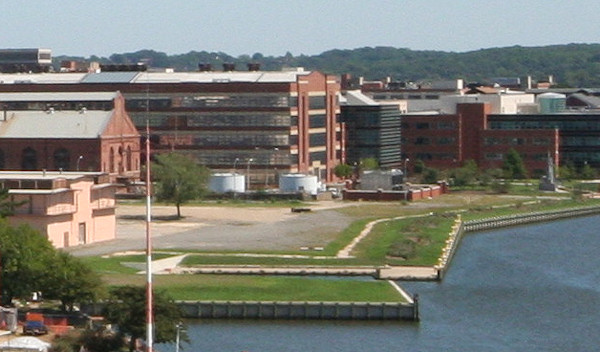 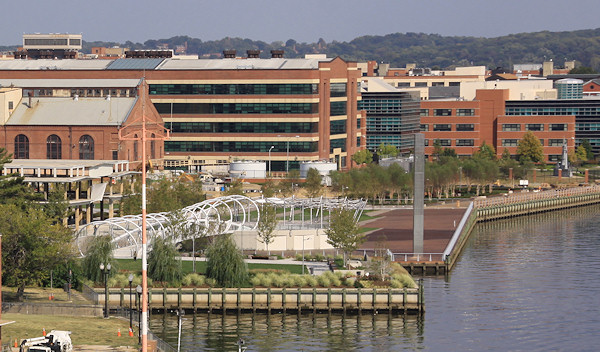 With the opening of the Yards Park, I've needed to get up to the southeast viewing platform at Nationals Park to update my photos of the Anacostia's Near Southeast riverfront, and thankfully I chose this weekend's sunny Saturday to do it. The before-and-afters seen above of the Yards Park footprint are pretty cool, and I've posted enlarged versions of these shots on my Yards Park page (scroll down about five photos to see them). The other before-and-afters of the southeast platform views are here.
It was just a smidgen over three years ago that I first got to look out at the Anacostia River from this vantage point, on a very memorable day while the stadium was under construction, and it's a spot that I really like returning to. With Diamond Teague Park and the Yards Park completed, and Potomac Avenue and First Street reconstructed, the view has certainly changed, even if there isn't the overwhelming amount of redevelopment that had been envisioned. (And that includes the still-untouched tracts of land at Poplar Point on the other side of the river.)
So, just for the heck of it, I tossed together a single collage, looking from USDOT and the Navy Yard all the way around to South Capitol Street and Buzzard Point, capturing nicely what this entire stretch of waterfront looks like in the fall of 2010. It's a view that won't change much until the RiverFront/Florida Rock concrete plant site starts getting redeveloped (whenever that might be), but it's still a nice image to have.

And if you want to know what the Capital Bikeshare station at First and N across from Nats Park looks like, here you go.