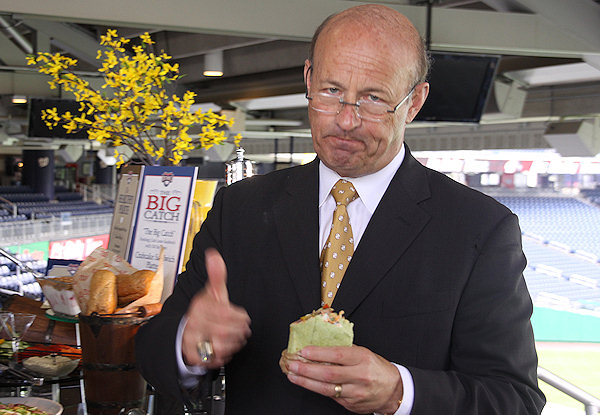 Stan Kasten's announcement today that he's leaving the Nationals at the end of this season has me looking back through the many photos I've taken of him, mainly during the construction of Nationals Park. Without any commentary as to his impact on the Nationals' fortunes on the field, I will say that he was a great "face of the team" during the building and opening of the stadium, and his gregariousness made it easy to get a lot of fun pictures. I tormented him with multiple shots of him on his Blackberry, and also made sure to get the complete series of Hard Hat photos as the ballpark went up, and he indulged me for the most part. (He probably enjoyed having at least one member of the "media" who was more interested in the stadium than in "The Plan.")
So, I've tossed together a quick gallery of my favorite Stan photos, which may provide a moment or two of levity. And I'll also sneak in a quick thanks to Mr. K for letting "just a blogger" be part of the Nats' move to South Capitol Street.
Sep 23, 2010 3:48 PM
Small Update (Without Much News) on Barracks Search
Unless you're big on process, RFIs, RFPs, and the potential crafting of legislation, there isn't really much news to report on the Marines' search for a location for a new barracks site to replace the aging and unsecure Building 20 at 8th and I. I was at the Community Leaders Group meeting this morning (as an observer, not a leader), and here's a couple snippets I came away with, although the very process-heavy discussions left me in the dust for much of the session:
What was originally going to be a public planning "charrette" this fall is now going to be a community forum, probably sometime in mid-November, coming after the Marines release a Request for Expressions of Interest to get a first read on the developers who might be interested in formulating a bid. The public forum (and a separate one on the same day for developers and industry types) will center around discussions about the official Request for Proposals that will then be crafted. (See, your eyes are glazing over.)
There are a couple of developers who have already floated ideas to the Marines, including the team of Winfield Sealander and Leon Kafaele, who both own a fair number of the lots on Square 929 and 930 (the two blocks between 8th and 9th and Virginia and M, including the "Quizno's building", although some of the lots along Potomac Avenue have gone through a foreclosure sale). The developers who bid on this public-private venture will need to demonstrate that they control or will control the properties on the sites they are proposing to develop; this would seem to make any proposed use of the Virginia Avenue Park site a bit more interesting.
The Marines are also looking at whether existing legislation covers their needs to get the development underway, or if new legislation needs to be written; if so, it would probably be placed in the next Defense Authorization Act. The if-all-goes-according-to-plan timeline is to get funding in the FY12 federal budget, with construction starting early in FY13. There would also be a NEPA process somewhere admist all of this well.
This has been a lot of words to basically say that there isn't much to pass along yet for people (like me!) who just want to know what's going to happen, and where, and when. But the Marines and the community leaders are clearly very aware of the community opposition to losing the two acres of open space that Virginia Avenue Park represents, though the Marines don't rule out the possibility of plans that would relocate some of the park's uses, even though there no doubt would be opposition to that as well. But of course there's some amount of community opposition for almost every site that the Marines have identified. But with Square 882 now officially marked as "removed from consideration" on the Marines' map, the options for a site seem to be getting pretty narrow.
UPDATE, 9/27: ANC 6B commissioner Norm Metzger has posted his own fine summary of the meeting, which I should have just waited for rather than trying to do it myself!