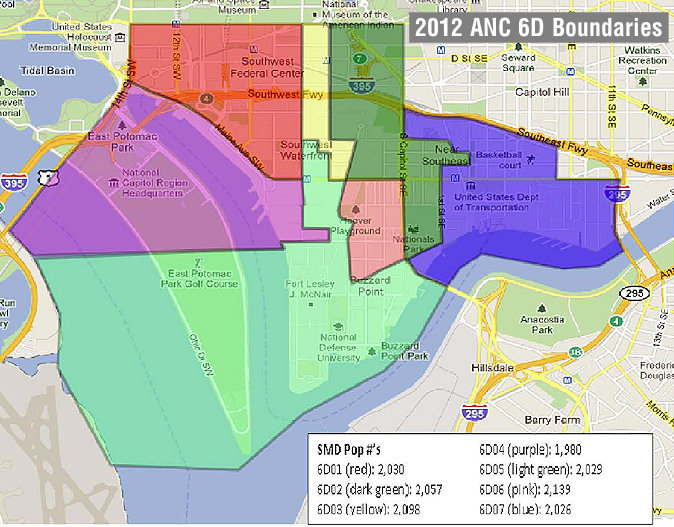 The DC Board of Elections updates daily the lineup of residents looking to run to election to the bajillion single member districts (SMDs) that make up the city's Advisory Neighborhood Commissions (ANCs), so it doesn't take much for me to tell you that two more potential candidates are now in the mix for the two single member districts that will begin covering Near Southeast in 2012, bringing the tally to four as of this evening:
* Damon Patton, a resident of 909 New Jersey, has picked up petitions for a run in ANC 6D02, the new cross-SouthCap ANC (in dark green in the map at right).
* Florence Johnson Copeland, a resident of the Capper Seniors building on 5th Street, picked up petitions to run today in ANC 6D07 (in dark blue).
* Ed Kaminski of Velocity had picked up his petitions early on to run in 6D02, and he has now gotten his 25 signatures to move forward with his candidacy.
* 6D07 Incumbent David Garber also picked up his petitions, and while he is not listed as having returned them, I would hazard a guess he'll get that done by the Aug. 8 deadline.
No sighting on the list yet of 6D02's incumbent, Cara Shockley, from Southwest.
The rest of ANC 6D, over in Southwest, is also looking pretty quiet with a week to go, with only one incumbent potentially being challenged, with Grace Daughtridge looking to run against Roger Moffatt in 6D05. Current commissioners Ron McBee, Andy Litsky, and Rhonda Hamilton are so far unopposed, while only one person is listed for 6D01, and it isn't incumbent Bob Craycraft, it's Ron Williams, Jr. And of these folks, only Moffatt has returned his petitions.
Anyone else going to run? Time's a wastin'!
More information on the races, how to sign up, qualifications, etc., in this post.