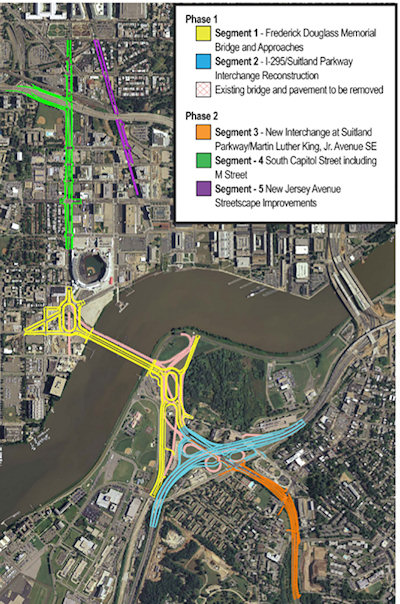 More than two years after four teams were shortlisted for the opportunity to compete for the project, DDOT announced today that it has issued the final Request for Proposals (RFP) for the first phase of the South Capitol Street Corridor reconstruction, which includes a new Douglass Bridge and approach work, plus a new interchange at I-295 and the Suitland Parkway.
The release today says that design/build proposals from the four teams are due this fall, and that DDOT expects to begin construction in the spring of 2017, and complete this first phase in 2020, but, well, We Shall See.
I absolutely cannot bear to write about this in any detail AGAIN, so if you haven't been keeping up with the plans to replace the existing 67-year-old bridge, please check out my post from August 2015, when it was announced that the project got its federal approval/record of decision, or my post from late 2014 about the supplemental EIS that presented some tweaks to the plan that had been stalled after a preferred alternative was identified back in 2011.
But if clicking on one of those links is more than you yourself can bear, I will just plagiarize the summary I wrote in August:
As you can see in the pilfered-from-DDOT graphic above, the new bridge will run immediately parallel and downriver of the existing bridge, with two new large traffic ovals on its approaches. There will also be a much-needed reconstruction of the I-295/Suitland Parkway interchange.
The bridge will have three travel lanes in each direction, along with 18-feet-wide pedestrian/bike paths on both the up-river and down-river edges of the bridge, which will be configured as one 8-foot-wide lane for pedestrians and a 10-foot-wide bidirectional bike path.
The eventual second phase of this overall "South Capitol Street Corridor Project" will be streetscape improvements to the north end of the street, similar to the spiffening that the blocks from N to Potomac received back in 2007 that give the street more of an "urban boulevard" feel. This will include a full redesign of the M Street intersection and a reconfiguration of South Capitol's interchange with I-395.
My South Capitol Street and South Capitol Street Bridge project pages are also good places to go for details.