1 Blog Posts
Sep 26, 2011 12:47 AM
Final ANC Redistricting Recommendation Maps Approved
At the Ward 6 Redistricting Task Force's meeting on Sept. 22, final recommendations for ANC and SMD boundaries were approved, and the 6D map they are recommending remains close to their original draft proposal, despite 6D's request for substantial changes.
I'm not going to talk about the changes in western Southwest, but you can see on the two maps below the large differences close to and east of South Capitol Street between what the task force is recommending (left) and what the ANC wanted (right) (click to enlarge): 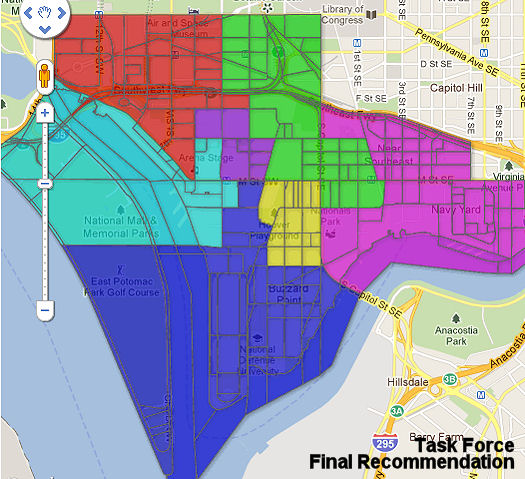 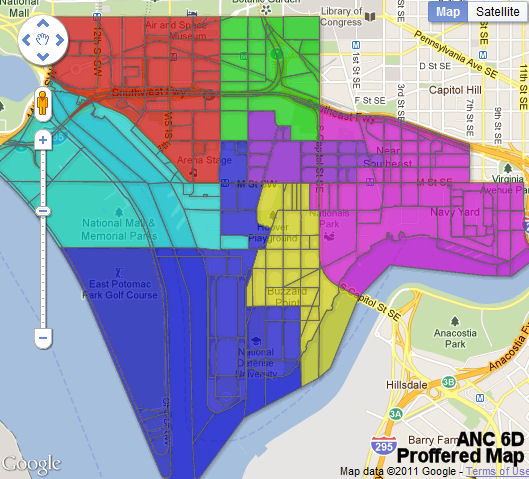 (Task Force final recommendation on left, ANC proposal on right. 6D02 is green, 6D03 purple, 6D07 fuschia)
The task force's original recommendation in August (very similar to the map above left) was for 6D02 to come across South Capitol Street into Southeast, covering the area bounded by I, New Jersey, and N. Then 6D07 would cover the rest of Near Southeast (except for the small cut-out on the northeastern side, which has been and will continue to be in ANC 6B). This would mean that 6D07/Near Southeast commissioner David Garber's current address would no longer be in 6D07 but instead in 6D02, where commissioner Cara Shockley also still resides under the new boundaries.
This, with a number of other changes that the 6D commissioners disapproved of, moved them to proffer their own map (above right), which kept 6D02 all in Southwest and instead expanded chair Ron McBee's 6D03 SMD across South Capitol, in such a way that Garber's block would remain in 6D07. (It also had 6D07 coming west across South Capitol for one small block, bounded by South Capitol, M, Carrollsburg, and N.) Cara Shockley vehemently disapproved of this map at the commission's September meeting, while Garber did not vote on it (citing what he described as his constituents' desire to be instead be a part of ANC 6B).
I was not at the task force's Sept. 22 meeting, but the ANC's arguments do not appear to have held much sway, and the final 6D map being recommended by the task force (above left) is very similar to the original draft map, at least in terms of how it handles blocks east of South Capitol.
The task force will be meeting again on Monday, Sept. 26 at 6:30 pm at 1100 4th St. SW (DCRA hearing room) to approve the report that will "include the narrative to explain the recommendations as well as the required text description of the ANC/SMD boundaries." That report and the maps will then be submitted to Tommy Wells on Sept. 28, who will then submit Ward 6 redistricting recommendations to the council on Sept. 30.
UPDATE: Guess it wouldn't hurt to include a link to the current 6D SMD boundaries.