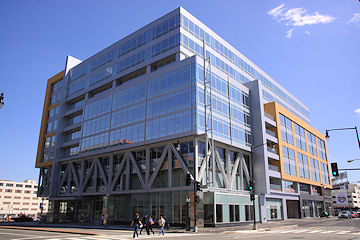 Readers are reporting that, on schedule, the new Bank of America branch in the ground floor of 55 M Street opened today. The BoA web site also now lists it as well, though it doesn't include the lobby hours yet. It's still called the "Waterfront" branch, since this is technically a move of the branch that was at 4th and M SW for many years, in the old Waterside Mall/new Waterfront development.
This is also the first retail tenant in 55 M, the building right on top of the west entrance of the Navy Yard Metro station.
If I were a good blogger, I'd run over there and get a photo, but, given that this is the fourth bank to open in the neighborhood, my Financial Services Excitement Meter is not exactly exploding off the charts. (UPDATE: But the Twitterverse comes through and makes up for my malaise.)