1 Blog Posts
Jun 27, 2010 1:02 PM
Near Southeast's Violent Deaths: 1987-2004, An Overview (Sunday Rearview Mirror)
Readers may be familiar with the map a little ways down the right side of the JDLand home page, showing recent crimes in the neighborhood (along with a larger one showing more crime statistics for the area since 2005). However, there's another map and dataset I've wanted to build for a long time, that I'm finally launching today. It's not anything to really celebrate, however: 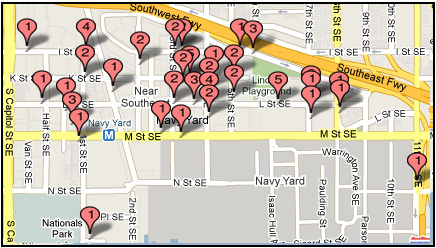 What you're looking at is a map of 64 violent deaths that occurred in Near Southeast between 1987 and 2004, when crack and other drugs and the accompanying violence nearly destroyed Washington, DC. And, if you go to the page itself, you will see the breakout of each death, with a name of the victim (when available), the date and location, and a brief thumbnail of what happened. The map and the data are interactive, so you can view just by year, or location, or type of death. It's not uplifting reading, but I really do recommend taking the time to go through it.
I can't pretend that this is a complete list; there are no online databases that easily offer up this data. I spent hours (and hours and hours) doing "grid searches" of the Washington Post and Washington Times electronic databases, having to search by street names and locations ("300 block of K street, SE; 300 block of L Street, SE; 3rd and K streets, SE; 1000 block of 3rd Street, SE;" etc. etc.). There's no guarantee that the newspapers mentioned every homicide, especially in the years when there were more than 400 murders across the city.
And, of course, this doesn't begin to capture the number of other crimes in the neighborhood during those years that didn't result in homicides--the robberies, the assaults, the non-fatal shootings and stabbings, etc.
It should be remembered that Near Southeast wasn't anywhere close to being the most dangerous area in the city; the 64 murders I've documented aren't even one percent of the 6,023 murders reported in this 18-year period (source: MPD, via the Internet Archive). So, as you look at this Near Southeast list, multiply it by 100 to imagine all the people who were killed in the city in those years. 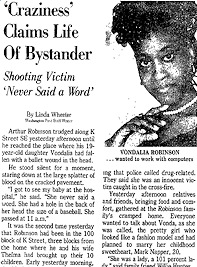 It turns me into an old codger to say it, but it's really true: those of you who didn't live in the DC area in the late 1980s and 1990s really have no concept of what Washington and its residents went through in those years. Even though large swaths of the city were considered "safe," with the bulk of the epidemic crime happening in certain neighborhoods, everyone was affected by the unrelenting drumbeat of murders and violence.
Nights with seven murders in DC were unusual but not extraordinary; reading the paper each day with little more than tiny blurbs on most homicides (because they weren't really "news") made for a bleak landscape, even if you spent most of your time in sections of the city where day-to-day life seemed unaffected. DC's title of "Murder Capital of the World" was known far and wide, to the point that if you were traveling and told someone where you from, you'd often receive a sad shake of the head and hear, "It's such a shame what's happened to that lovely city."
It was a terrible time; and I say this as someone who was never affected by the violence personally in any way, other than knowing to avoid certain areas and be very careful during nights on the town. Looking back on it all now, through the lens of how far the city has come, makes the level of violence seem all the more incomprehensible and maddening. There's no question that I have become a little haunted over the past few weeks as I compiled this list, as my old generalized feelings of "quite a few people died on these streets over the years" have now been replaced with names, locations, a few photos, and gruesome details of executions and people in the wrong place at the wrong time. 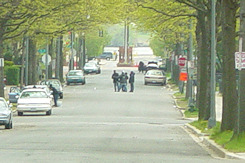 And yet the violence of the era probably fueled my interest in watching the city's redevelopment, to see neighborhoods that I had given up for lost in 1990 (such as Massachusetts Avenue east of Mt. Vernon Square) turn into luxury condo havens by the early 2000s. And it was why I began to watch--with no small sense of wonderment and even a little skepticism--as I started to hear in the late 1990s about the plans to "revitalize" the area south of the Southeast Freeway, an area that was a near-total No-Go for me from the time I moved to the south side of Capitol Hill in 1994 until my first furtive photographic forays by car in 2000 and 2003. (It's somewhat amazing now to realize that I did not actually put my feet on the ground at Third and K, SE, until the summer of 2005.)
I'll be writing in more detail in future entries about the violence in the Cappers, and at the Chapter III nightclub, but I wanted to post this overview first, to illustrate Near Southeast's descent to rock bottom for the people who might not be familiar with the recent history of the neighborhood, and also to remind everyone else of just what we as a city went through, as those memories become somewhat hazy in an era when some of the biggest battles are over funding for streetcars and dog parks. The city is certainly not without violence now, but the scale just doesn't compare.
And perhaps it'll also help clear up why I might not react with quite so much alarm when new residents write me concerned about a wave of auto thefts or other property crimes. I admit that it's somewhat unfair, but I think newcomers can talk to almost anyone who lived in Washington during the era of the Crack Wars and get the same reaction: You just have no idea.
UPDATE: Just to close the circle a bit, I should note that the reason I ended the dataset in 2004 is because, to the best of my knowledge, there have been no murders in Near Southeast since 21-year-old Terence Gathers died at Third and K on March 25 of that year.