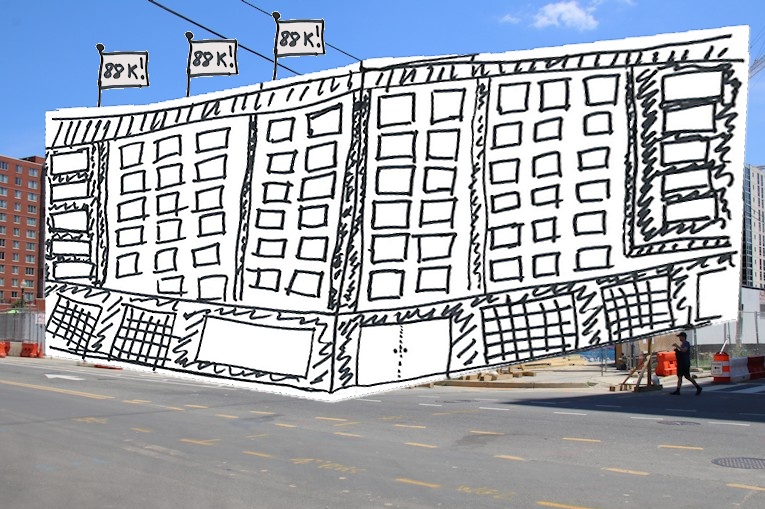 * DC CROSSING: We still don't have an officially sanctioned rendering (so you know what that means!), but we now know that what we've been calling Square 696 will now be known as DC Crossing, with an address of 949 1st Street, SE. The new placeholder web site says that apartments will be delivered in 2020, and it will be managed by Bozzuto. My photos from last week show that the eastern half of the project, along 1st Street, is making good progress, and, if you can decipher it, this site plan schematic I found in public records shows the layout of the block, from above.
* CONGRESSIONAL CLEANERS 2.0: This is not quite as exciting as neighborhood cafe concepts or Nashville chicken, but I've confirmed that Congressional Cleaners will be returning to the neighborhood this summer, this time in the ground floor of the Park Chelsea on I Street just east of New Jersey. This is the cleaners that was located at Capitol Hill Tower from 2007 to 2017. Hopefully it won't get robbed on its opening day, like it did last time. But that was a different era.
* COOL PIC: A reader on a flight leaving DCA last week happened to be in the right place at the right time and got this great overhead shot of the neighborhood and the Douglass Bridge construction. Guess I'll need to start paying a fortune in airline tickets.
* ICE CREAM SOCIAL: A final reminder that--weather permitting!--there will be an Ice Cream Social at Canal Park on Thursday, May 30, at 6:30 pm, with free scoops from Altani Gelato and Ice Cream Jubilee, to celebrate the BID's "Then and Now" exhibits. And I'll be there, pointing at the photos and saying, "I took that. I took that. I took that one, too." RSVP on the BID's Facebook page, so that there's enough scoops to go around and we don't end up with The Great Ice Cream Riot of 2019.