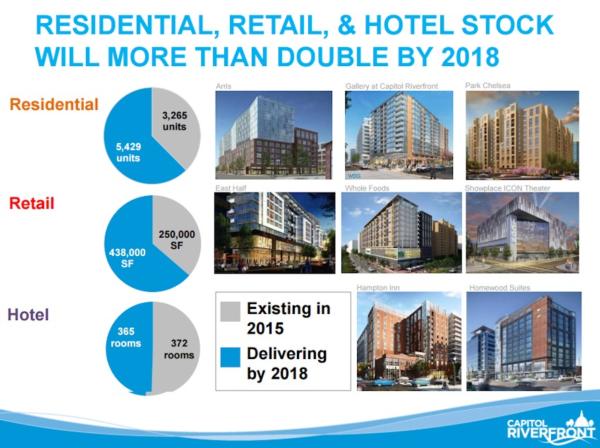 The Capitol Riverfront BID held its annual meeting on Thursday, and while I wasn't there (don't ask), both the Annual Report and the presentation slides are now available for your perusal.
It won't shock anyone who passes by here with any regularity, but the main topic was the neighborhood's current building frenzy, described as "the largest development boom in its history" (ahem), one that is expected to last at least through 2018 and that was responsible for 32 percent of all apartment construction starts in DC in 2015.
The neighborhood's population is up to an estimated 4,800 residents, with that number expected to rise above 9,000 in the next three years, thanks in large part to the nine residential projects currently under construction and at least another seven (and probably more) in the near-time pipeline.
There don't appear to have been any announcements of new retail or anything, though I do see confirmation of the rumors I've heard that 82 I Street is going to be named ORE 82. 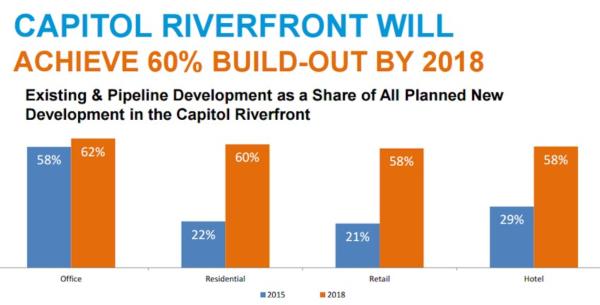 One thing that hasn't been important up to now but will be going forward is that the Capitol Riverfront boundaries and the JDLand Coverage Area are not a 100 percent match, because the BID includes Buzzard Point and hence the coming development thanks to DC United's stadium.
Read both the slides and the report for more details, and then just keep coming back here to read about it all As It Happens.