peek >> << back
Near Southeast DC Past News Items: sq976
Advertise on JDLand 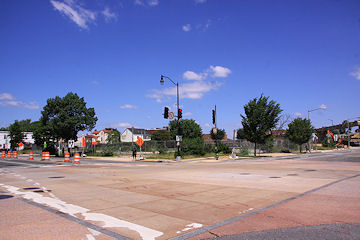 The notion of the Washington Humane Society acquiring the former Exxon site at 11th and M SE was in the news back in February, and I can now report that the land deal has been completed, thanks to a $5 million grant from the city.
This location will apparently replace the WHS facilities on both New York Avenue NE and Georgia Avenue NW.
But this won't be the agency's only presence on the block: it already operates its spay and neuter clinic in a building at 10th and L adjacent to this Exxon lot.
I had hoped to include more details on the plans for the site, but this post couldn't wait any longer, thanks to the newly released Draft EIS for the Marine Barracks hunt, in which this 36,500-acre lot was identified as one of five possible sites for the new barracks. {Cut to Barracks hunters despondently crossing yet another potential location off their list. Or not.}
This site, officially located at 1022 M St., SE, has been vacant since the Exxon closed and was demolished in 2008, except for a brief residence by a chair.
More to come on the Humane Society plans.