1 Blog Posts
Nov 30, 2016 10:39 AM
Wednesday Tidbits: Homicide on L Street, Flipped Car, Billboards
* HOMICIDE: The neighborhood's first second* non-ghaslty-workplace-mass-shooting homicide since March 25, 2004 happened on Sunday, when neighborhood resident Anthony Young was shot to death in the 600 block of L Street, SE; a woman with him was wounded. Police charged Babajide Pittman, 31, with second-degree murder while armed and assault with a dangerous weapon, and said that the the shooting was a dispute between two people who knew each other. ANC 6D Commissioner Meredith Fascett wrote about Young, saying that he was "working to mentor neighborhood kids and had planned to volunteer at the Community Center." (WaPo) UPDATE (VERSION 2): *Originally this update was to say that there were in fact two homicides in the neighborhood in 2016, but after seeing the second one listed as being in the 1000 block of 8th St., SE, I misremembered it as the shooting that happened in the barber shop there. After being corrected in the comments, I went looking, and found this murder from May, but it is described as having happened north of the freeway at the time, but is now in the MPD crime stats as being south of the freeway.
* HOMICIDES 1987-2004: If you haven't come across the overview I wrote in 2010 of the 64 deaths in Near Southeast during the worst of the city's violence epidemic, it might be worth a read. The map and rundown is here. 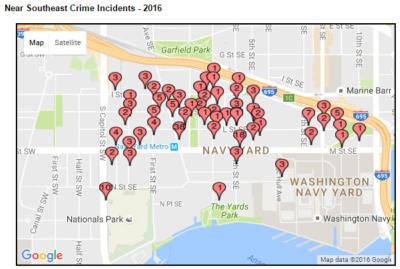 * MORE CRIME: The actual map part of my big crime database has probably been busted for months, but no one's mentioned it so no one must ever look there. But it's fixed now.
* OOPS: A car flipped in the 300 block of K Street on Tuesday night, and one passenger required extrication from DC Fire/EMS. On-the-spot photography by a JDLand reader here.
* MORE ON BILLBOARDS: The Post writes about the Nats Park digital billboards controversy.
* ACROSS THE WAY: A report on the Zoning Commission's look at the new DC United Stadium. (WaPo)
(If you follow me on Twitter and feel like these tidbits all seem familiar, you are correct! If you don't follow me on Twitter, or don't ever scroll through the Twitter box on the right side of the JDLand home page, you are missing out on what is still a pretty active news feed. It's a way for me to keep the info flowing when I don't have time to post. So, keep an eye on it...)