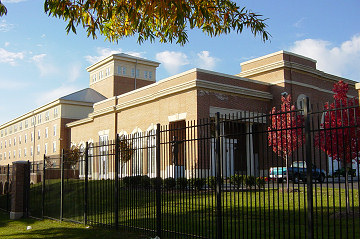 ANC 6B03 commissioner Norm Metzger has a report on yesterday's Community Leadership Group meeting on the search for a new Marine Barracks site. (I'm sorry, I just can't bring myself to call it the CIMP process on first reference.) My short version: there's no news on a site selection, and it appears that any RFP to build a new barracks is probably at least a year away, and even that date could be derailed if any sort of federal legislative action is needed to allow the sort of public-private development partnership that the Marines seem to be looking for. Norm's description of the meeting as being an "odd mix of frustration, clearly expressed community anger, and clarity" seems to be a good summary of where things stand from the group's point of view.
Norm also posted the CLG Status Report handout, which I think will be of most interest to residents for its "The Art of the Do-Able" conceptual graphics (emphasis on conceptual) showing how either the 11th and M "Exxon" site or the 8th Street "Square 929/930" site could be developed in ways that would not touch the Virginia Avenue Park. There's also a similar graphic showing how the presence at the current BEQ site along Virginia east of 5th could be expanded without losing the soccer field, which would requiring the shifting of the planned Capper community center site. (On this last one, I'll note that it looks like what is marked as M Street on the renderings is actually L Street, and the second graphic is showing a northeast view from 5th rather than the northwest as marked.)
Finally, there is this statement from the CIMP folks that seeks to address what it calls "some misperceptions circulating about the future of Marine Barracks Washington and the local community," centering mainly the idea among some residents that a site has already been chosen along with the rumors about what may or may not happen to Virginia Avenue Park. "It is very important that the Virginia Avenue Community Gardener group knows that their concerns have been heard loud and clear and addressed accordingly," the statement says, going on to say that "informal site design concepts strongly suggest that there is potential for options under which the Bachelor Enlisted Quarters Complex could be developed, without impacting any portion of the Virginia Avenue Park and gardens."
There are two meetings scheduled to update the public on the process, on Nov. 30 and Dec. 7 from 5 to 9 pm at Eastern Market's North Hall. More information on the entire process is available at the CIMP web site, or you can slog through my pile of posts on it all over the past year.