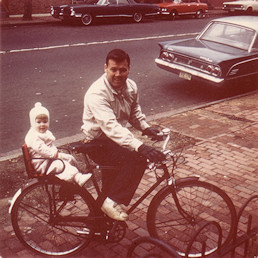 My dad has handed in the final installment of his memories of life on Capitol Hill, this time covering the very tumultous late 1960s. While there are plenty of good memories (and home movies!)--swimming at the Skyline Inn, birdbath martinis at the Market Inn, the Gangplank, and my brother's days attending the nascent Capitol Hill Day School--Dad's essay focuses in large part on the 1968 riots after the assassination of Martin Luther King, Jr., and the impact it had for people living on the Hill.
We left the Hill--and Washington--in late 1969 when Dad took a job in Chicago, but we returned to the area in 1977, living in Chevy Chase but always keeping our ties the Hill strong, both professionally through Dad and my brother's jobs and then personally when I moved to the Hill in 1994.
When my now-husband and I bought our house in June 1995, right as DC was hitting rock bottom and just before the financial control board was instituted, most of our friends were more than a little concerned about our decision, especially given that this was how many people thought of Washington outside of far Northwest and the National Mall. But Dad and Mom certainly approved of my decision to put down stakes back in the neighborhood where their life together--and my life!--had started.
So, this brings this nice wintertime diversion to an end, and I hope people have found it interesting. And maybe it's spurred a few of you to get your parents' memories of your childhood neighborhood (wherever it may be), and maybe some longtime Hill residents have shaken loose a few of their own recollections while reading this. (I know I've gotten a number of "Yes! The Oakland Inn!" responses.)
Thanks for doing this, Dad, and now go get back on your bike: spring is coming.